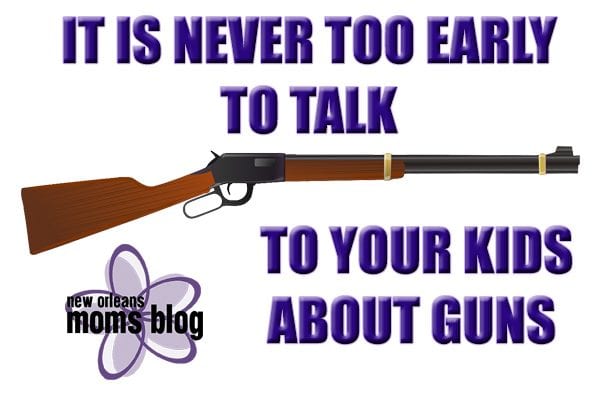 We have guns at our house. In fact, we have a few, all different types. We have shotguns, rifles and handguns.

I hope you won’t keep your kid from coming over to play.

We have guns, but we store them in a safe place. That safe place is a large gun safe that requires a 10 digit pass code to open, and I don’t even know the code.

Having grown up in South Louisiana my whole life, in a family of sportsmen and then marrying a man who grew up hunting from the age of 6, I was destined to have the presence of firearms in my life. I am okay with that, and I’m okay with my son having his own gun at the age of 3.5. That is because it is the first step we are taking in teaching him about gun safety and respect from an early age.

No, my son does not use his gun. His gun is a family heirloom that has been passed down to him from his grandfather, who is an avid hunter and retired Wildlife & Fisheries administrator.

Just recently the Louisiana House of Representatives voted overwhelmingly (93-3) to implement gun safety classes as early as elementary school. I am 100%, undoubtedly okay with that. The measures would teach the basics of gun safety; walk away if you see one, tell an adult, and DO NOT TOUCH.

My son is 3, but he already knows these three basic principles of gun safety. We have chosen to educate him now so that he is prepared in case he is ever exposed to guns outside of our home, because you never know where they may just see one.

I am not an avid hunter. I do not particularly enjoy going to the firing range or going skeet shooting, but from a very young age, I was taught to respect firearms and that they were NOT toys. I was taught that you use guns for hunting (which I have no desire to do – I cry every time I see a dead alligator on the side of the highway) and for protection in the most extreme circumstances; when your life is being threatened. I could not imagine using a gun in any other way. My dad offered to take me hunting, and I politely declined, but I knew to NEVER touch guns or go near them.

I know that in recent years, there have been many incidents in the news where children were victims of improper gun handling or where gun owners were not responsible with the right they were given. I am not sure why this has happened, but my guess is because the basic principles of firearms safety and respect were not taught. Guns are scary, and I know most parents do not want to even THINK of their children ever coming into contact with them. But, the reality is, they exist, and while we can hope that everyone follows the rules of gun safety, we can’t depend on that, especially if we don’t talk to our children about them. It is our job as parents to teach our children how to recognize that guns are not meant to be played with instead of shielding them from something that can potentially harm them if they are not educated or prepared for dealing with the situation. While it is a gun owner’s responsibility to always have their firearms locked up and inaccessible to children, it is always prudent to talk to our kids about the dangers of firearms and how to respect the power they have.

Little boys, and even some little girls, are interested in guns. Since my childhood, children have played games like cops & robbers or soldiers. Whether we like it or not, children will pretend their fingers are guns because they have creative imaginations. Rather than teach our kids that guns are bad or forbidden, we should use the opportunity to sit with them and and teach them to leave, tell an adult, and do not touch anything that looks like a gun.

If a family who chooses to have guns in their home de-mystified the power of what a gun can do, in person, rather than children seeing it in a movie or on television, I can almost guarantee that the message of the dangers of mishandling a gun can be apparent. Showing our children at an early age WHAT can happen and repeatedly reminding them of proper firearm safty will be a great stepping stone to continuing future responsibility when they are older and go hunting or target shooting.

If you do not have guns in your home, I still urge you to have that conversation with your children about gun safety and respect. Because we live in Louisiana, Sportsman’s Paradise, it is highly likely that your kids will know a family who may have guns for hunting or skeet shooting. If your child has a friend whose parents hunt or carry guns, don’t be embarrassed to ask them about their gun collection and how it is stored. Be diligent and ask them if they have already started teaching their children the basic rules of firearms safety. I know that if someone asked me, I would not hesitate to tell them the steps we have taken to ensure safety among our children, especially advising that our guns are stored in a safe with a pass code that I don’t even know.

Be sure to have that talk with your family about firearms. It just may be life-saving.

Help for the Men: Five Awesome Stocking Stuffers for the Ladies...

Why I Cherish Our Bedtime Routine