“Great play, kiddo,” I yell in reply to my son’s enthusiastic shouts from the field. He beams with pride. Why, I’m not exactly sure, because I have no idea what he just did. 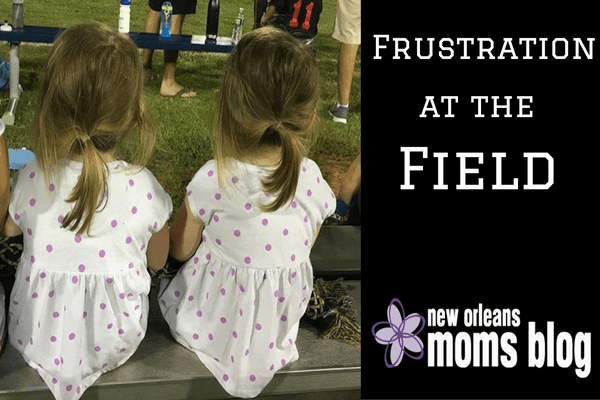 I’m a coach’s wife. My husband lives and breathes sports and our son likes them, so he usually ends up playing one sport every semester. It’s great and I mostly support it, but there’s a small snag that always foils our plans for an easy sports season. Without fail, no matter where we play or what team we are assigned, my son’s practices and games conflict with my husband’s two-team coaching schedule.

This would not really be a huge problem if I wasn’t chasing the toddler twins while I’m also supposed to be watching the boy play. Truthfully, I don’t get to watch more than one or two plays a season because I’m either running to get one of the girls off the field, keeping them from leaping off the bleachers, calming a fit, or digging in my bag for snacks or juice or SOMETHING that will keep them occupied so I can have five minutes to watch their brother 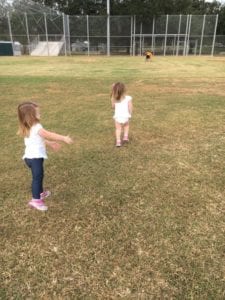 play. And that’s before we throw in the 99.5% guarantee that one of them will drop a giant load in their diaper as soon as the game starts, or the other will do so before halftime. Or that one will pee through her clothes and ruin the spare outfit, forcing me to let her run pantsless at the park. Yes, that happened.

“Can you take a video of him if he gets the ball?”

Sure, let me get right on it. As much as I roll my eyes at my husband when he asks that, he’s got good intentions. He knows it’s nearly impossible for me to watch the field AND the twins at the same time, but he hates missing out. He really wants to be there and it kills him that he can’t. To his credit, he drives across town after he’s done with his own games and practices to make it, even if it’s only for the last five minutes. I WANT to watch my son play. I feel terrible that I fib to him about seeing all of the plays he has made. I asked my twin mom friends if it gets any easier as they get older. They said maybe, but not really. I guess it’s the same for any mom with younger kids trying to watch older siblings play.

So why do we keep enrolling him if it’s so hard, you ask? Because he needs it. He’s a high energy kid in a rigorous academic program with not enough recess time. He NEEDS to run off his 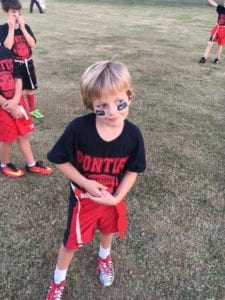 energy and he needs the focus and direction in a non-school setting that he gets from his coaches. Being on a team is helping him control his “big feelings” and he’s learning important lessons about taking turns and teamwork. At the end of baseball season last year, he was still throwing fits if he didn’t get to play a certain position every inning. Now he happily tries new football positions without a fuss.

I know that this is just a phase of life and someone will tell me that one day I’ll long for the evenings at the ball park with all three of the kids running around and having fun. And maybe I will, but right now it’s all I can do to just make sure everyone keeps their pants on, and, well, we still need to work on that.