Last November, I went to see Jerry Seinfeld in concert at the Saenger. As expected, the majority of his act was funny, but there was one bit that was gut-bustingly hilarious to me … the bit about his kids’ bedtime routines.

“The bedtime routine for my kids is like this Royal Coronation Jubilee Centennial of rinsing and plaque and dental appliances and the stuffed animal semi-circle of emotional support. And I’ve gotta read 8 different moron books. You know what my bedtime story was when I was a kid? Darkness!”

A Royal Coronation Jubilee Centennial bedtime routine? Boy, could I relate to what he was saying. 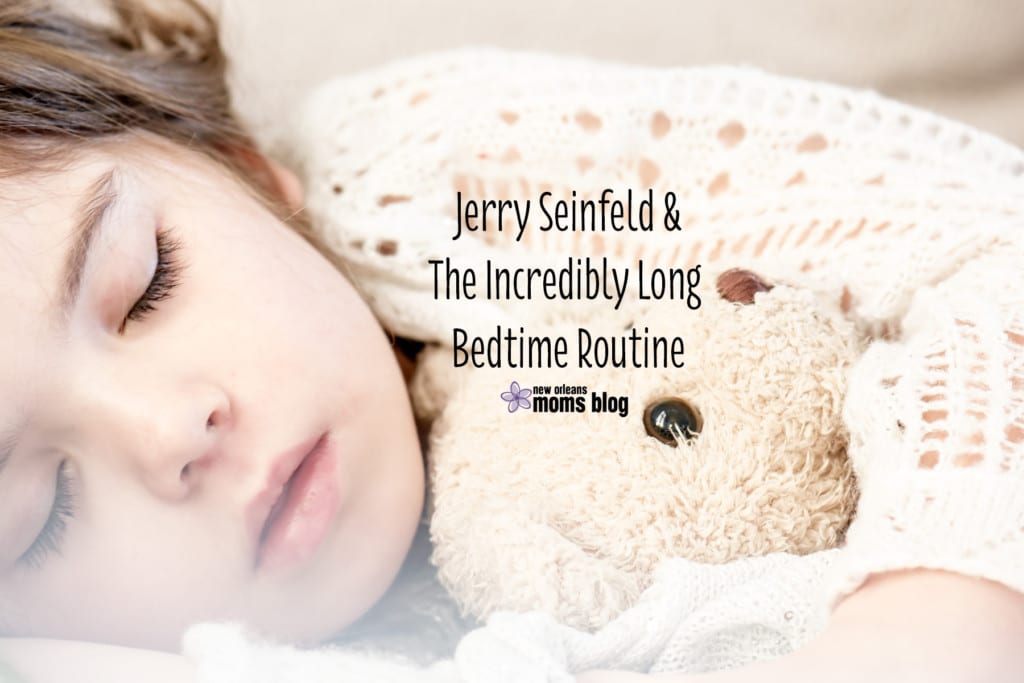 At 8 months, my daughter’s bedtime routine consists of being fed while I sing a few songs (Over the Rainbow, Can’t Take My Eyes Off of You, and Close to You) and then put in bed. I hope we can keep it fairly simple as she grows older – perhaps adding a song or a story to the routine down the line. Judging from how out of control my son’s bedtime routine has gotten though, I doubt we will.

So what exactly takes place during the Royal Coronation Centennial bedtime routine with B, my three year old son? Here is a play-by-play:

Bedtime wasn’t always this drawn out. My husband used to do the bathroom routine with him, read a couple of stories, and then call me up for songs. After I had my daughter, we moved songs downstairs before the official bedtime routine and things sort of snowballed from there. Every time I did something to be funny (like Belly Time or the Mega Snuggle), thinking it was a one time instance, it immediately became part of the routine. I learned my lesson after a couple of times, but I still have steps 5-7 to remind me to never deviate from the routine.

I know the day will soon come when B doesn’t want a Mega Snuggle or won’t want me to sing to him and pet his head. He won’t want to spend two minutes every night blowing kisses to me. There are some days I wish for an abbreviated version of our routine so I can pop open a bottle of wine and zone out to the Housewives, but most days I relish every moment. Mostly it’s the best part of my day.

Playground Mom Probs: How a Simple Fall Sent Me into a...

How Old Is Too Old For A Lovey?