As a kid, there were things my parents would say that frustrated me to no end. I would huff, roll my eyes and wonder why they made such annoying and unhelpful remarks. Fast forward a couple decades and I’ve caught myself saying some of the exact same things. And in return, frustrating my children to no end. Before I had kids, I thought “I will never say or do x, y and z.” Open mouth, insert foot. 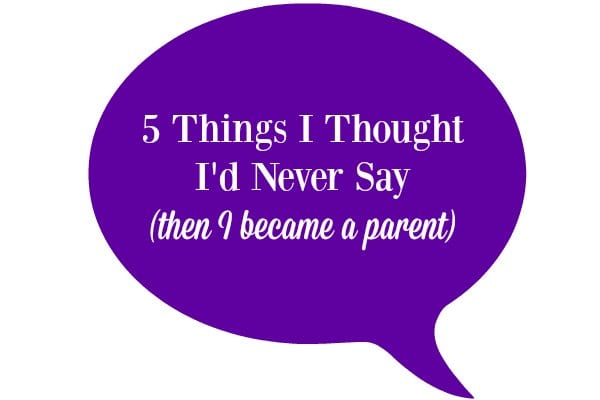 My kids are notorious for digging for gold quite often. The 2 year old loves to proudly announce when he can retrieve a booger from his nose, and then tries to give it to me. My 5 year old actually acted offended when I moved his hand from wiping his snot on my couch to his shorts. He said “No! I don’t want my snot on my clothes, let me wipe it on the couch!” Why yes son, what was I thinking?

I’m an only child and my close cousins were girls, so this is new territory for me. As long as my boys aren’t playing with each other’s penis, I usually try not to draw attention to it. But when we’re in public and he’s walking down the grocery aisle ‘adjusting,’ I have to draw the line. I’d like to think they grow out of the habit, but unfortunately I don’t know that’s always the case.

Because I said so

This statement was once the bane of my existence. I just wanted a reason. I realize now I probably just pushed and pushed … and pushed until my mom had nothing else to say. I’ve been there a number of times already, and each time I cringe when it comes out my mouth. But I’ve learned that sometimes no other answer will suffice anyway. So I resort to opening my mouth and sometimes having my mother come out.

Quit crying before I give you something to cry about

I think I’ve only said this once, but boy did I sound just like my dad. Once I did say it, I thought, “So what exactly do you propose to do?” Well, I hadn’t thought that far. I learned this statement didn’t really work for us, better for my path of discipline to just take a toy away temporarily and get the results I need.

No dessert until you finish your pizza

I swore my children would never eat quintessential kid foods like pizza, hot dogs, chicken nuggets [insert typically unhealthy food here]. I made all their baby food, offered them whatever we were eating. My youngest has a great appetite and a diverse palate. My oldest, however, has to constantly be persuaded to eat. Somewhere around 20 months old, he decided he no longer liked anything he’d been eating. How lovely. I nursed you, spent hours making all your food and you’d rather eat Cheerios off the floor. “Kids will eat when they get hungry” simply didn’t apply, as he would go an entire day with no food if it didn’t appeal to him. With a child always in the 25th percentile for weight, the pediatrician said just feed him what he’ll eat, and his vitamins will make up for the rest. So here I am with my organic pizzas, hot dogs and mac and cheese, bribing him to finish his meal.

What’s something you never thought you would say or do until you had kids?