Ever since the day he was born, my son has had a head full of hair. We waited until the one-year mark for his first haircut. When the day finally came, I brought my camera, keepsake baggie, and one-year-old to the usual hair salon. I wasn’t sure how he would react. He sat quietly on his dad’s lap and watched the tiny baby curls fall onto the floor. He posed for pictures with the hair stylist, and we left with our newly-trimmed toddler, happy with a lollipop. It was perfect.

Fast-forward through a year’s worth of pleasant haircuts to age two.

Suddenly, he wanted nothing to do with haircuts. The location was the same. The hair stylist was the same. He, however, was very different which leads me to the three ridiculous reasons why I now cut my toddler’s hair. 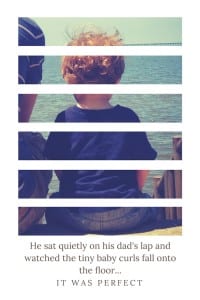 There are no other words to describe the fit he throws when we attempt to put him in the chair and bring scissors toward his head. Looking at him, you wouldn’t think it takes two adults to keep him still while he thrashes about during a haircut. We have lovingly nicknamed this tantrum the alligator death roll because he twists and turns until we let go.

I’m sure there’s a plethora of advice to be given about this two-year-old’s tantrum. We have tried electronics to distract him – they get thrown. We have tried candy to appease him – it ends up covered in hair. Time out, talking, begging, pleading … none of it has worked. I’ve come to the realization that when my strong-willed son decides he does not want someone trimming his hair, there’s little I can do to make him sit still long enough for it to not look like a hack job.

Reason #2: The Hair Salon Suggested We Take Him Elsewhere

After a couple experiences of the ultra-mega-super tantrum, AKA alligator death roll, my hair stylist suggested that we maybe bring him to a more “kid-friendly” salon. I tried to understand, but I was hurt. I felt abandoned. I mean, I get that he’s not the easiest client, but how am I supposed to bring him to a new place and expect him to warm up to it? I thought his tantrums were getting better, and it seemed to be slightly less difficult to cut his hair. I mean, I only had to partially hold him while his dad bear-hugged him. Nonetheless, we did a little research and found a hair salon reviewed as more “kid friendly.”

My husband brought our son to the new hair salon after work one day. I’m not sure exactly what happened. All I know is when my son walked into the house, I saw his hair was half-way cut–super short on the sides with a giant mess of hair remaining on top. The only explanation given was “They told us to not come back.” Yikes. After further questioning, I was able to piece together what happened.

The hair salon had a no-sitting-on-the-parent’s-lap policy. My son wanted nothing to do with sitting in the chair, but eventually was coaxed into it. Once the hair stylist started to cut his hair, the alligator death roll commenced. She stopped mid-haircut and said “I can’t do this; you need to take him somewhere else.” My son left happy because his hair was still intact (for the most part), and my husband left defeated. He still has not told me if he had to pay for the botched haircut.

My Career as a Hairstylist

After getting the boot from two hair salons, we weren’t sure what to do. A head-shaving suggestion forced me to turn to Pinterest for advice. I found a few videos and diagrams on how to cut a boy’s hair – it seemed easy enough. I decided I could best avoid the ultra-mega-super tantrum if I cut my son’s hair in his sleep. The first several times were tedious. I had to refer to the charts and videos every few snips, and even then, I cut teeny tiny pieces because I was afraid I’d mess it up. I didn’t want my son to wake by moving him, so I cut one side at a time. Actually, by the time one side looked trimmed, I’d have to start on the other side because it grew out. I knew hair styling was not my calling.

My son is closer to age three, and we’ve attempted a few (slightly less tantrum-filled) hair cuts since them. My hope is that he outgrows this haircut hating phase so I can retire my scissors for good. Until then, I will keep referring to my Pinterest charts and trimming while he sleeps.

This better make for a good memory when he’s older.

My Kid is a Slow Eater {And It’s a Problem}