Before the boys started kindergarten this year, I took them in to get their scruffy, overgrown locks trimmed. They were each sitting in chairs in the salon, about to be shorn, when I went to use the restroom. When I walked out, one of the stylists beckoned me over and spoke the words I have been terrified of hearing since they started to grow blond wisps on their sweet little heads.

She parted his hair and sure enough, I could see tiny little dots near his scalp, nearly the same color as his hair. She even (shudder) pointed out the live little bugs darting around.

“He said he told you his head was itching,” she said, and yes, now I recalled him complaining of being itchy, but I chalked it up to mosquito bites, since he was usually covered in those. Plus, boys are, you know, filthy little creatures.

It suddenly occurred to me that Miles wasn’t an only child. We all turned to where the other two were getting trimmed, and sure enough, at closer glance, it seemed all three were infested with the little bugs.

(Is your head itching yet? Just reading this?)

They all hopped down from the chairs, some with haircuts half completed, and with my head hanging in shame, we drove across the parking lot to Target. I begged the pharmacist (in a whisper, of course) to direct me to the lice-removal products. He handed me a box of noxious chemicals and I stealthily brought it to the register to check out. 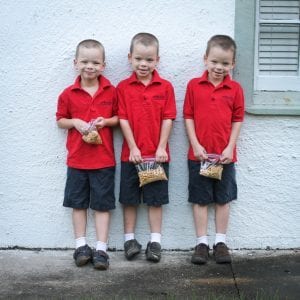 When we got home, the first thing I did was thank the good Lord that I had boys. I had my husband get the clippers out and I shaved those boys’ heads within an inch of their lives. Then I slapped on the chemicals, let them do their job, and “combed out” their stubble with the little metal comb that came with the kit. I spent the rest of the night washing or spraying with Rid every soft surface in the house. Stuffed animals were relegated to a sealed trash bag, except for a few beloved doudous that got a hot bath in the washing machine. For the next week, our house was cleaner than it had ever been.

A week later, I slathered them again with the chemicals that probably lowered their IQ a few points, and breathed a sigh of relief that this was a problem that was relatively easy to take care of.

Until a few weeks later, when I got a note in Linus’s backpack. Cue the Psycho music again, lice was found on one of his classmates!

Have your kids had lice yet? If so, what was your strategy?

18 Problems Only New Orleans Kids Have

Slumber Party or Sanity? You Can Only Choose One