When my five-year-old started reading, the first thing I wanted to say (over and over again) was “You’re so 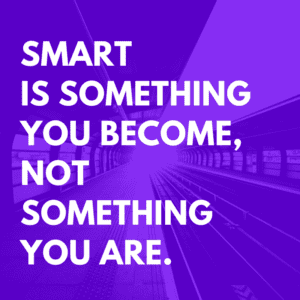 smart!!” but I didn’t. When he counts to 100 or tells me random animal facts, I so badly want to tell him how smart he is, but I don’t.

In fact, I’m doing my best NOT to tell him he’s smart.

To give you some background, I’m a high school teacher, and I’ve done a lot of reading on this very thing. I’ve read books about grit, growth mindset, and how children succeed, and they all say the say thing — how you praise your child matters.

Basically, if a child is told he or she is smart, they are less willing to put themselves out there and take risks, especially if they think they’re going to make a mistake. After all, if they did something right and were praised with “you’re so smart!” what does it mean if they do something wrong? However, if you tell a child they put forth great effort when they keep practicing or show diligence, they’re more likely to take risks because if they make a mistake it just shows they didn’t get it … yet. That’s the great difference between having a growth mindset versus a fixed mindset. It’s all about having grit and working toward a goal. 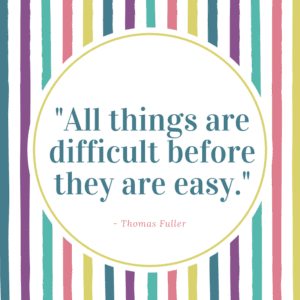 Not telling a child he is smart sounds crazy, but I’ve seen “smart talk” results firsthand.

I teach advanced level students and most of them have been told throughout their lives how smart they are. I didn’t see anything wrong with this because it’s true. They ARE very smart. But, they also struggle dealing with failure and mistakes. Like, full-blown meltdowns over a low grade. Or, doing whatever it takes to make a high grade, like cheating, instead of learning through the struggle. A low grade is viewed as devastating rather than an opportunity. This is why I’ve made it my goal to encourage growth mindsets rather than fixed mindsets.

So, now that my son is starting kindergarten, I have to practice what I preach. Whenever he is reading a word that is difficult, I have to pause before “You’re so smart!” comes out of my mouth. Instead, I say “you’ve worked really hard sounding out that word” or “you’re doing a great job practicing reading this summer.”

A growth mindset isn’t just something that is applied to school stuff.

It can be applied to anything, really. For example, my son is in karate, and he had to learn his kata before he could 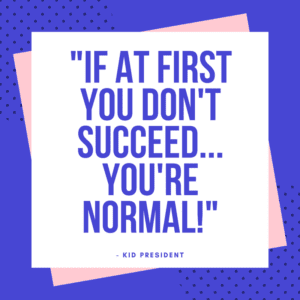 promote to his next belt. He practiced over and over and over. He made mistakes; he would turn in the wrong direction or kick with the wrong foot. But, each time he made a mistake, I made a point to encourage him. I would remind him of the time he didn’t know most of his kata and how far he’s come. When he finally got the kata down, he was so proud because he had practiced so much.

Instead, you’ll hear me say “you don’t have it … yet,” “keep trying,” “keep practicing,” and “you’ve got this!” I don’t want my kid to be afraid of making mistakes. The cliche is true — mistakes are proof you are trying.

Friendsgiving is Pretty Much the Best Thing Ever