Living in New Orleans, I started looking at schools about twelve months before I planned to enroll my eldest daughter in an early elementary childhood program. I wanted to make sure that I had the full picture about the schools I was interested in. The questions I had were:

My husband and I were also considering buying a house, so we pondered if we should purchase in the city where we wanted our kids to go to school – even later, for high school. I wondered: were we too crazy about planning our real estate purchase based on where we may want to send our kids to school in ten years? At the same time, we all know that Ben Franklin won’t take students from outside of New Orleans. Same for the Academy of Advanced Studies in Metairie. Or Haynes. I am naming these schools because they have a great reputation and a waitlist as long as my arm.

There are SO MANY schools! 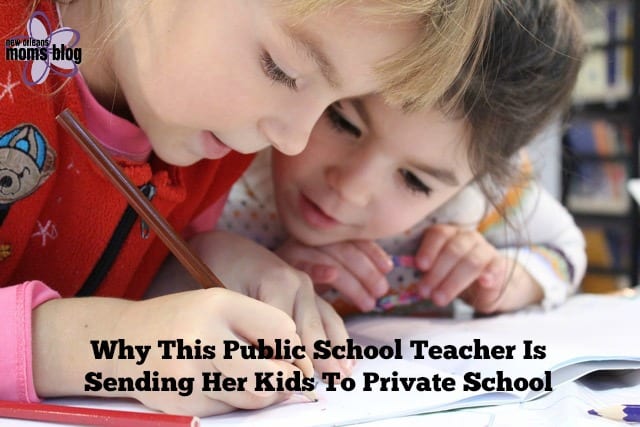 The task of choosing a school is so complicated, and even more so in New Orleans I believe. Between the charter schools (and among them various levels), the Catholic and other religion-affiliated schools, the independent private schools, the all-girl schools, the schools with good sports programs, and the immersion schools, it forces parents to actually do some homework and pick one. In other parts of the country, you pick public or private. Period. I listened to a lot of friends who told me the same thing over and over: “You need to find what works for YOUR child.” I thanked them and nodded as if I had a clue about what they meant. My daughter is two and a half years old. How am I supposed to know where she would fit best?

So I did my research. I spoke to local educators, attended two school fairs, and every time I ran into a mom of young children, I would ask “does he/she go to school? Where? Why did you pick that school?” I became a little obsessed about making sure to find the BEST school for my daughter. I wanted to ensure that the next fifteen years of her life would be worthy of her, and that she would feel comfortable in her classroom among her peers. As a public school teacher who has taught in three states including Louisiana charter and public schools, I had a general good idea of what to expect in the public/charter school system. Growing up out of state, I also went to public school for my entire education. It was a great education which opened many doors, but it was not in Louisiana. Well, it became somewhat obvious very quickly that private school would work a lot better for us. My criteria for picking a private school vs. a public one are then as follows:

Meaning excellent teachers, being encouraged to attend various professional development sessions, being allowed to attend conferences. Also, I would like my daughter to be instructed by teachers from other states, who have studied various subjects than just education or followed the classic teacher preparation program. I think that it is important to have a diverse faculty who have a story to tell and who can share from their experiences outside the classroom. I want my kids to know that there’s a world outside of Louisiana.

There is NO WAY I ever want to hear that my kid felt threatened at school. Protection of kids and teachers ensures a better learning environment. I am talking for protection from threats from outside AND inside the school. I have heard the horror stories of kids bringing a gun to school. I, myself, was exposed to violence in my classroom when a kid threw a chair at another. I am also talking about bullying. Bullying happens everywhere, in both public and private schools. With both poor and rich kids. Knowing that, I want to know that if my kids are ever bullied, there will be clear direct consequences. The only concern I have about private schools is … what if the parents of the bullying kid are very wealthy and make some random donation? Will it change how my kid is treated if I don’t donate? Am I being too dramatic?

If my kids are brilliant, their school probably won’t matter as much. But what if they need extra help? Most mothers, including myself, are quick to believe that we have conceived geniuses, but if my kids need special attention at school, I want to know that the school has a clear and consistent approach to special education with trained staff. And it goes both ways. If there is a kid in my daughter’s class who needs help, I want to know that he/she is getting adequate help and not disrupting my daughter’s education.

Guarantee to be enrolled

I am definitely attracted to some charter schools, especially the Lycée Francais for instance. But am I sure that my kids will get in? It’s a lottery! By enrolling in a private school, I know where my kids get in earlier, and I can apply to several schools at once, then pick my favorite.

In the end, public schools just can’t compete with some of the funding some private schools get. I do not want my kids’ education to suffer because of politics. I don’t want to be scared that gifted education programs will be cancelled because there is no more money one year. Private schools charge tuition, and I am very aware that it is a luxury for me to afford a private school. Yet it works for me because somewhere, I am buying certainty. I consider education the biggest gift I will give my daughters. A great education is a key to a brighter future: a better understanding of the world, access to traveling, a better job, and a better pay.

How did you decide what school was best for your children?

Five Things You Should Know When Moving With Kids