My oldest started 2nd grade this year and had his first set of tests last week. Today, Noah came home with his packet of grades. I glanced over it and told him what a good job he did, and he dramatically burst into tears and exclaimed, “It’s NOT good Mom, I got a B!” I had to just stare at him for a second and give him a hug and repeat that a B IS good and that he is doing a fantastic job. I couldn’t believe that he was so upset over this. He had 2 other papers with A’s, why was he agonizing over a B?

My husband and I have never made remarks that certain grades are bad or unacceptable, so we had no idea why he was beating himself up over this. I’ve realized that even at such a young age as a society we put so much pressure on kids. Above average, advanced and gifted are all terms that are now used too freely to describe children. I can admit, I’ve been guilty of this as well. 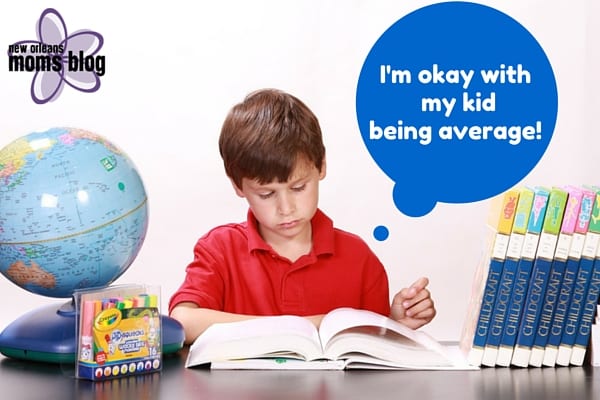 It seems that parents today expect the best when it comes to their children. While the A+ student at an Advanced Studies school while being the highest scoring soccer player sounds like a dream role right out of a movie; it’s not always reality. And you know what? I’m totally OK with my child who gets B’s and has no idea what sport he wants to continue yet. This is what being a kid is about.

What happened to just having fun jumping on a trampoline without the need to go to gymnastics 5x a week in hopes to be a gymnast? Not every kid who excels in gymnastics will go to the Olympics, and not every child in flag football league will play pro in the NFL. The pressure indirectly put on the youth of today is just outrageous.

I don’t want Noah to get nervous every time he takes a test in fear that he won’t get an A. Stress and anxiety are never a good mixture and especially not for a young child. I don’t want to sacrifice the fun of school with the pressure of him having the highest grades. There is fine balance and as a parent, I need to find what ours is with our children. At this age, I’m more focused on building good study habits than putting emphasis on on grades.

Seeing Noah burst into tears seeing that B on his test was a slap of reality for this Mom. I need to teach him to do his best and sometimes his best won’t always result in getting an A and that is perfectly fine. If his best is getting B’s or even C’s, I’m totally fine with is as long as I know he is doing HIS best.

Valentine’s Day Through the Years {Before & After Kids}

Am I Crazy To Want Another Baby?