My son surprises me everyday. Sometimes I think he is wise well beyond his years.

Let me preface this statement with a little bit about my childhood. I was raised by a very traditional Pakistani family in a very rural-ish American town in Iowa. We had a cornfield in our backyard, and my mom wore traditional clothing which consisted of a long pretty tunic, loose flowing pants, and a scarf draped around her neck made of chiffon or something. She always wore a bunch of shinny golden bangles. She was distinctly ethnic but to me, she looked beautiful.

I never considered myself different or even remotely strange to the rest of humanity until I entered first or second grade.

I do remember in Montessori school, my brother and I spoke to each other in our “native” language of Urdu. It was standard and didn’t seem odd. We just swayed in and out of Urdu and English like it was second nature, never inviting unwanted attention.

In fourth grade, it was Mrs. Ellinger’s class. I remember my mom showing up in her traditional garb to cheer me on for my first play. The odd humiliation and sinking (please find me a hole to fall into) feeling started to set in. I was different than my peers. Though my tawny complexion and dark hair had done nothing to set me off, the moment I saw my mom walk in with her hair braided down to lower back and her pretty ethnic clothes, I realized that I had fallen outside the spectrum of normality. Suddenly, my mom didn’t look as amazing as I grew up thinking. I wish she had just worn a t-shirt and jeans. All my life, I had been surrounded by warm and friendly Americans; I suppose it never occurred to me that, by virtue of my family’s peculiar traits, I wasn’t the same after all. 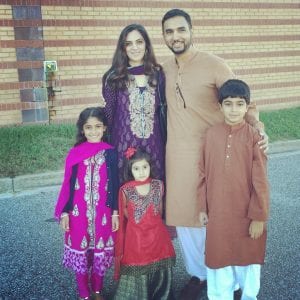 As time went on, everything in my house and school life seemed different.

You mean, I have a different religion? You mean to tell me that spicy food that burns your tongue isn’t considered amazing? One day, my mom put a meat patty in my Care-Bear lunchbox, and even before I opened the box, the kids were already plugging their noses because they smelled something “nasty.” Boy, I wasn’t just different, I came straight from Mars.

I never really came to terms with my differences until reaching the “cool” college years. In college, being different was a delicacy; it was what set one apart from the sea of blonde hair and blue eyes.

This morning, I placed a note inside his lunch box alongside a piece of ethnic desert. The note read, “Dear Zain, I love you and have a great day. Love, Mommy.”

When I picked Zain up from car pool, he told me two things. First, the kids made fun of him for still calling his Mom “Mommy.”  Second, a few of the kids asked him what he was eating and how weird it looked. Before I could console him or apologize for subjecting him to these hurtful jabs, he proudly told me, “Mama, I told my friends I don’t care if you guys think it’s weird that I call my mom Mommy or that my desert looks weird. I like it and that’s all that matters.”

Wow, wow and wow is all I could think at that moment.

I still asked him if his future notes should be signed with “Mom” instead of “Mommy.” He very proudly told me he still had the note in his lunchbox and that he didn’t want me to change a thing.

Tis the Season to Saunter in the French Market District: Three...