Last week my son was diagnosed with Tourette Syndrome. Tourette Syndrome is characterized by tics which present as vocal and/or motor behaviors that are evident for at least one year. My child has a motor tic (facial twitching) and a vocal tic (a repetitive hum). Tourette Syndrome often comes with co-occuring conditions such as Obsessive Compulsive Disorder (OCD) and Attention Deficit Hyperactivity Disorder (ADHD). My son has indications of both, though his neurologist said “you can take away the ‘D’ if they don’t negatively impact his grades or behavior, especially in school.” He has excellent grades and generally acceptable behavior, so instead, I say he has obsessive compulsive behaviors, with instances of hyperactivity and impulse control.

The kid has really learned to manage quite well, despite his long list of could-be diagnoses. He’s incredibly smart, extraordinarily articulate, loves to read, draw and can light up a room with his genuine smile. The trouble is, to get to see these things, you have to get beyond the other stuff. 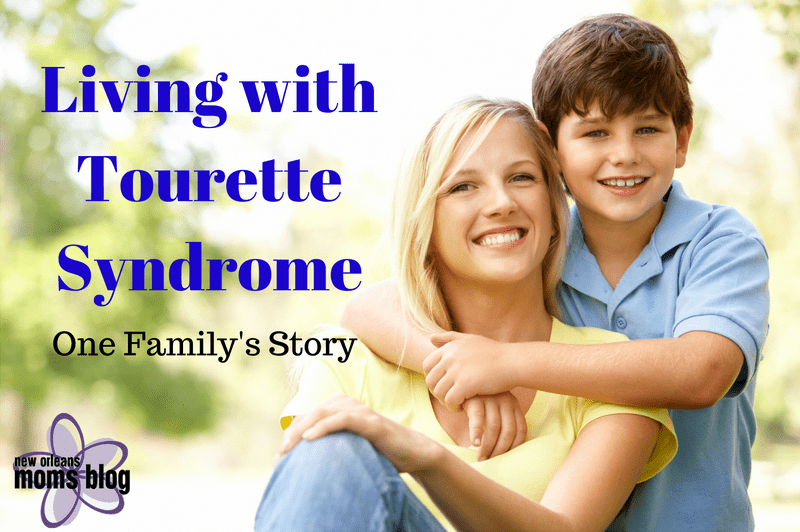 It’s strange how a diagnosis can both break you and relieve you. I knew he had his issues, which we were addressing as they arose, but I never imagined they were much more than a kid learning his place in the world. He’s my oldest, so I wasn’t sure what was ‘typical’ and what to worry about, but I had a few feelings.

What is that other “stuff” I referred to up there? Well the list is long, but it’s all connected. As I mentioned, he has a vocal tic which is a short hum he repeats over and over when he’s anxious, nervous, happy or excited. At first, we thought it was a habit picked up at piano lessons during counting of half-notes. He also has a twitch in his right eye. Initially, I thought it was his hair in his face, then allergies, and then he was diagnosed with Bell’s Palsey. Months after treatment, the twitch persisted and finally the Tourette Syndrome diagnosis came. When he was nervous, excited, anxious, happy, tired – nearly any elevated response – the twitch appeared.

The co-occuring conditions that we handle every day are related to the Tourette Syndrome. There are so many routines and repeated behaviors. The child thrives on routine and consistency. He has sensory sensitivity in that lines in socks, bumps in shoes, tags on shirts or pants, zippers – you name it – bothers him immensely. Most days there’s at least one incident, but we’ve learned as a family to cope and to help him manage.

There are several options for treatment for Tourette Syndrome and it’s co-occuring conditions. We have chosen to continue to help him manage armed with knowledge, a strong sense of accountability and without medication. We have been able to help him by teaching him how to express himself without fits and tantrums. He is rewarded amply for positive behaviors and especially for handling new situations or breaks in routine graciously. We try not to respond to whining or fits and encourage him to identify and express his emotions.

We try to keep him somewhat calm which reduces the manifestation of the tics and to teach him how to bring himself down in the event they appear. We offer him as much advance notice as we can for breaks in routine or triggers (like if we won’t be home to put him to bed or if he has an event, appointment or meeting that’s not a normal occurrence). It is also important that we stay calm as much as possible when addressing any behavior or manifestation.

We speak slowly and carefully when disciplining. Listening to him when he speaks and trying to prompt him to express himself has become key. We acknowledge his feelings but still call him out when he’s being out of line. He is held accountable for his behavioral outbursts, and ensure he understands he is responsible for every action. Every interaction on our part is calculated until it becomes habit, and even then, it’s a bit of a struggle to maintain serenity during those teachable moments.

There is a chance his symptoms could dissipate as he enters adulthood. We will continue to prepare him for the real life that he faces every day so that if the symptoms persist, he will be able to manage them effectively. We will spend our days teaching him to be his best self and hope we succeed in the end. Today we had a big win and it’s days like this we remember why we work so hard. Tourette Syndrome will not define him but how he overcomes it will.

I Want MY Mommy {And a Hysterectomy}