The Thrill of Being a Jesuit Cheerleader :: Go Blue Jays! 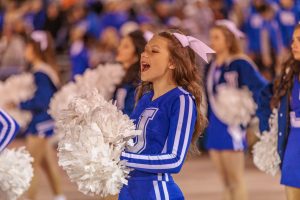 When I returned home to New Orleans a few years ago for our son to attend Jesuit High School, I never could have imagined our daughter, Abby, would become a Blue Jay too! In the city we came from, Abby was a gymnast, a soccer player and a dancer for many years. Uprooting a young girl in 6th grade is a scary task but it was also an opportunity for her to spread her wings and fly. She was excited to hear the news that she was accepted into St. Catherine of Siena School with a large class of very athletic girls. We received information about Cheerleading tryouts, and I was adamant that she should try out Cheer as “summer cheer camp” would be a wonderful opportunity to make new friends before starting a new school.

She did not make the team. As the school year began she watched several of her new close girlfriends who made the team perform at events, compete and win competitions. They traveled to Disney and took home the big win. She cheered them on the entire season from the sidelines with a determination and grace-filled heart that made me incredibly proud. She joined an All-Star team, spent countless hours at the gym and many weekends at competition that I re-considered cheer all together. I am kidding of course, but cheer moms will understand that sentiment. Just as her team was reaching their goal of a bid to Disney, the season abruptly ended with the closure of the entire gym. She wasn’t swayed and continued training in preparation for St. Catherine try outs. Then she made the team! She was officially a 7th grade Gator Cheerleader!

Covid shutdown did not crush her spirit.

I don’t think much more explanation is needed other than to say she was devastated. We were too. No season. No performances. No competition. She wore her uniform a total of 2 times, once for team photos at the end of the season. Her tumbling coach offered virtual zoom lessons on our home trampoline and conditioning routines via email. He was determined to prepare her for High School tryouts and continued to share how fun and rewarding cheer is. He assured her that she IS a cheerleader. 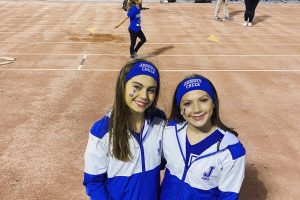 for Brother Martin cheer. Abby and another teammate agreed to accompany that friend to tryouts, so that she wouldn’t be nervous or feel alone. They practiced with her, encouraged her strengths and were her personal cheerleaders. As a parent, this was one of those “this is what sports are supposed to be about” moments. Friendship, support, and Fun.

Abby had chosen Mount Carmel Academy as her high school and debated whether she even wanted to cheer anymore. A friend who was trying out for MCA cheer encouraged Abby to not give up. When we asked us for advise, we asked her to give it one more try. Having a son at Jesuit, we were deeply aware of the amazing legacy, tradition and pride surrounding Blue Jay athletics. Co-Ed cheer offers so much opportunity for versatile athletes like Abby. Over 65 girls attended tryouts and the competition was fierce. Abby was only 12 years old. I don’t think I could put into words the unbelievable joy that filled our home the night we received the news she had MADE THE TEAM! Jumping, crying, screaming, big brother launching her into the air – pure family excitement.

The thrill of making the team. 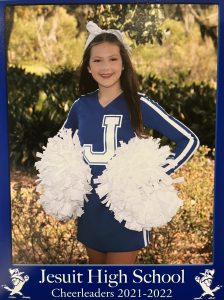 UCA Summer Camp, Jesuit Uniforms, Competition Routines, Football Season – oh my goodness football season! The winning season, the massive student section known as the Gizzard and all that comes with the Jesuit community. I shared the journey above to emphasize that we could not have imagined a better first Jesuit Cheer Season for our daughter. As mothers, we all want our children to be surrounded by caring role models both adults and peers. Our Jesuit family is filled with amazing coaches, wonderful new friends, and beautiful traditions. Today, she will put on her White Jesuit uniform and make her way to Yulman Stadium to cheer on her Blue Jays in the Division I Championship Game. Abby is so honored to be a member of Jesuit cheer. What an amazing time to be a Blue Jay! We are so proud of her for persevering and reaping the rewards of never giving up. 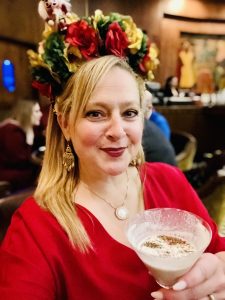 Jaime is a mom of two Jesuit Blue Jays. Her husband Kirby works in Saudi Arabia and she is a stay-at-home mother who has a flair for life, love and laughter. She is so happy to be home again in New Orleans. She is a member of the St. Catherine of Siena choir and loves to volunteer including chairing the Back to Banks Jesuit Bazaar this spring.

Safe and Sound :: Home Safety and Security for Your Autistic...

Infertility Made Me a Better Doctor and Mom