Before I was a parent, I had all the answers. As an actual parent, I’m constantly questioning if I did the right thing. Never would I ever make my kid change schools, I said. Then we had kids and realized that it wasn’t quite so simple, especially in this town.

We decided early on that we’d send our son to the school where his dad taught, with one exception. If he got into the magnet school, we’d send him there.

That simple plan was great in theory: cut, dry, emotion free. He started Pre-K 3 on the same campus where dad taught and the twins attended daycare. He thrived. He loved being there with his dad, the community environment, and being the “big little man on campus” who had been there since he was 10 weeks old. 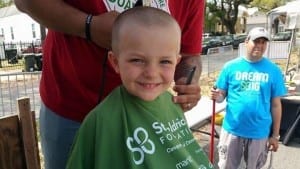 It came time to take the magnet entrance test and we decided it was best that we assumed zero. We didn’t have high hopes; we didn’t have low hopes. We brought him, told him nothing but the fact that he would go show some teachers what he knew, and then we dropped it. There was no point in agonizing over the results or potential decision we had ahead of us.

February rolled around and the letter came. We cried when we saw he had been accepted; pride mixed with conflict. We put it aside for a few days … well, that’s what we said we’d do.

The emotion attached to the decision unexpectedly overwhelmed me. I obsessed over the decision. I crunched numbers. I consulted friends, family, and a few educators. Would he be okay if we switched him? Would we? He had been at his dad’s school for four years. Could we really imagine him anywhere else? Were we ok with him missing out on the traditions of the school we knew and loved? How would we swing it financially for the next decade if we passed up the opportunity for a great free education? Were we selfish for making him switch? The questions were endless, as was the anxiety. 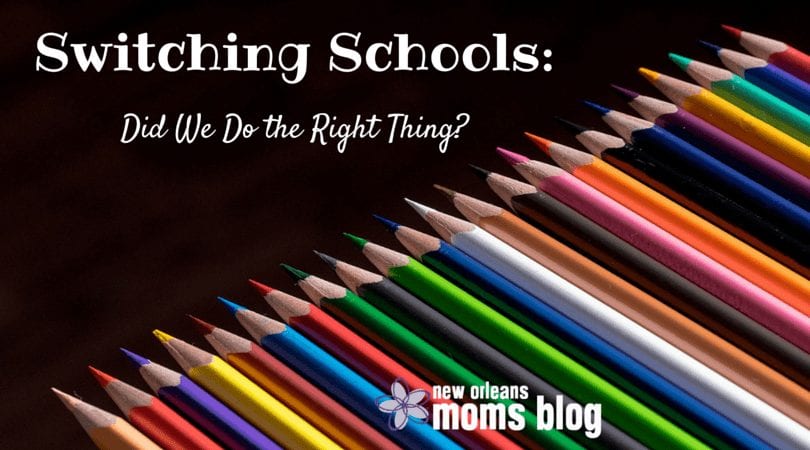 I grew up here and attended nine years of Catholic school before going to a magnet high school. My husband grew up in a traditional public school system in Tennessee and switched to a private school his senior year after his family moved. Knowing our son, we felt confident he would probably be fine in any scenario because we had experienced all of them.

Ultimately, we decided that we had been given an opportunity we couldn’t pass up, and we had to at least give it a try. There was no shortage of tears as we dropped off the acceptance packet and then met with administrators at his current school. They were so supportive that it almost made it harder to be confident about it. I will always be grateful for their kind words and understanding.

We finally told our son about a week before school ended. It gave him some time to get used to the idea while also having a chance to ask to continue friendships he had established during his time there. I sobbed uncontrollably during the end-of-school program. Not because he was older, but because I still wasn’t sure we’d made the right choice to leave. It almost feels like we’re moving away from family.

He’s enjoyed his visits to the new campus and is most excited about–get this–all of the grass. It’s funny what kids latch on to—you think they’ll be devastated about leaving their friends and instead they’re excited about the prospect of fewer skinned knees.

When this post runs, we will be a few days into our journey toward the unfamiliar. New uniforms, completely new drop off and pickup routines, the promise of new friends for all of us. I’m hopeful, but I think I will always be wondering if we made the right decision. I pray he will be as happy as he has been the last four years. I know myself well enough to know that I will be replaying the “what if” reel over and over in my head. But, as everyone we consulted about this decision told us, kids are resilient. I’ll keep telling myself that until I get comfortable and the semester gets going.

As for him? He’s just happy to play in the grassy yard.

Under Pressure: Being Nervous About Finding Mom Friends at Your Child’s...

Dear Husband, I See You