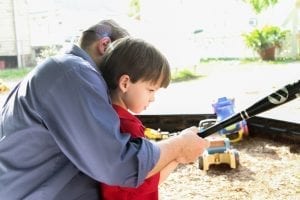 When I was pregnant, I would imagine our three children that would soon be born. Would they be girls? Would I be in for years of ballet lessons and Barbie dolls? Or would they be boys? While I was pretty certain they’d be boys (call it mother’s intuition, or a 50/50 shot of being right), what worried me was sports. Yes, it sounds sexist, because of course boys can take ballet and girls play sports. But these thoughts were coming from the hormonal brain of a pregnant woman, so you’ll have to excuse my inappropriate thoughts.

But when my boys were born, sports were the last thing on my mind. Until one of my LSU-obsessed uncles asked if I named Miles after the coach of the LSU football team, Les Miles. “Who?” George and I asked. And so it began…

Growing up, the only sport you’d see on the television was golf (zzzzzzz.) My dad played every weekend, and most spring and summer evenings were spent at the driving range. I played softball for a few years in middle school, and my sister was a cheerleader, but that was about it. My brother spent most of his time inside making weird movies and playing video games, rarely emerging from his room, except to annoy his little sisters. So no, sports didn’t play a huge role in my childhood. 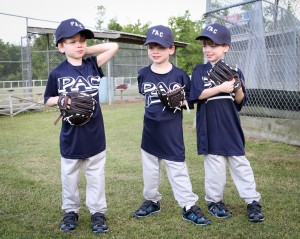 As the boys grew up, I realized I wanted them to play team sports. Not just because they look adorable in uniforms, but because I knew it would be good for them. Meeting other kids, learning to cooperate, and all of the other life lessons that come along with these kinds of activities. So as soon as they were old enough, we put the boys in t-ball. Oh, it was so cute. And naturally, I harbored the fantasy that one of them was going to *gasp* be a star! Previously hidden talent would be revealed! Would it be Oliver, who kicked a ball once at two? Or Linus, who had pretty good hand-eye coordination (well, at least when playing video games)? Or would it be Miles, who has boundless energy and was the first to roll over and walk?

Turns out, well, let’s just say, their talents probably lie elsewhere. It’s okay, when I was in my early 30s, I took tap dancing. I had this fantasy that I would just be really good. Effortlessly. I have no idea why I ever entertained this absurd notion, as I’ve never had much rhythm. Indeed, dance class was pretty much a disaster, and frankly, when Katrina came through and put a stop to lessons, I was a little relieved.

Happily, the boys are at least getting some joy from sports, and isn’t that the main thing? They played a couple seasons of t-ball, and this year, Linus decided he wanted to play soccer, so he played alone. And this week, Miles will be starting baseball, all on his own. Oliver plans to play basketball, as soon as he can.

It’s awkward to be the parents on the sidelines when I have no earthly idea what’s going on. I see all of these other parents helping with coaching and the kids who have clearly benefited from practice time in the backyard. But I’ll get over that.

Words to strike terror into any parent’s heart…

Win the Battle with Picky Eaters: The “No Thank You Bite”