If you are like me and watched Miley Cyrus’ “performance” on the Video Music Awards, you cringed inside at the thought of being a mother to a daughter. While watching the performance, I was thinking about her poor mother and how horrified and embarrassed she must feel. But – to my shock – at the end of the performance they panned the camera over to the audience and her mother was giving her a standing ovation. My thoughts then changed from sympathy to WTF.

Being a Parent, Not a Friend

While there are so many different parenting styles out there, they are all based on the same foundation. It is called parenting not friendship. I am supposed to be my child’s parent. I am not supposed to worry about being her friend. She has friends and will have more as she gets older, but she only has one mother. It is my job to take that duty head on and mold her to be a person that I am proud of. 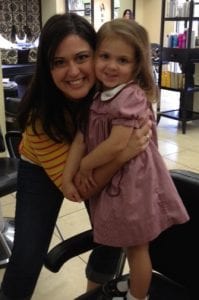 My husband and I are taking that responsibility seriously. We require please and thank you, we say no frequently and my child is no stranger to time out. While it is not our goal to be mean parents, we do want to maintain limitations and operate with the idea that it is okay if she is mad at us or not happy that she did not get her way. She will get over it, and so will we.

It is not fun to have your child mad at you, but it is part of the job. If parenting was easy then everyone would turn out to be ideal citizens, but if you have checked the news lately, that is clearly not the case.

As she grows, the challenges will of course change, but the role of being a parent will be maintained. I plan to not get involved in tween girl drama or worry if I am a cool parent by giving a really late curfew.

My personal philosophy on this also follows “actions speak louder than words.” For example, we watch what we say to and in front of her. I don’t mean stop dropping the F bomb because you are worried your toddler will pick up on it. I mean be respectful of what you say in front of your child if you want them to show respect to others. Follow the rules if you expect them to. Hold your ground if you want them to listen to you. Kids are smart.

I have no PhD in psychology or parenting; I am actually in PR, which could not be more unrelated. But I have seen examples of what I don’t want us to be as parents and what we don’t want her to be. We all know a child who acts out or doesn’t listen and a parent that does not step in to parent because they are too worried about upsetting the child. This is exactly what I am trying to avoid.

Parenting is choosing to take the hard road instead of the easy road. It is harder to parent than it would be to just be her friend and make her happy. While at dinner with my family, I have marched her outside of a restaurant and sat her down in time out. While it was not exactly drama free or what I wanted to do, we have rules that she has to listen to, and she was not cooperating. After asking her 500 times to sit down, she was acting like a wild woman, and I had to regain control by enforcing the rules. But while she was having her meltdown and I was feeling like a bad parent, an older couple walked up to me to say thank you. They thanked me for parenting my child. Not because she was interrupting their dinner, but they thanked me for parenting. The lady said to me that I was doing the right thing, and it will pay off. It was exactly the encouragement that I needed. Stay the course; we are doing what we need to.

We do have a very loving household with lots of fun, hugs, kisses and I Love You’s. We have found there is a balance. We created the boundaries, and she has learned them. The expectations have become unspoken.

Annelise has been known to put herself in time out, on her own. I will find her in the hallway in the usual time out spot. When I ask her what she did wrong, she will totally confess and apologize. I secretly pat myself on the back, but tell her that I am proud of her for owning up to it and following the rules. We hug, and she is back in action as a happy two-year-old.

Of course, I am sure there are plenty of things that we are doing wrong, because we have no real idea of what we are doing. But, when her teacher tells me that she is a great listener and a good kid, I feel like we are doing something right.

My fingers are crossed that we are doing a good job creating that mold for her, but who knows; she could totally turn out tattooed, pierced and with a rap sheet. Let’s just hope not.