In theory, having a playroom is wonderful. Your kids have an entire room for their toys, legos, karaoke machine, etc. so that they don’t take over your house. It’s their space where they can bond, watch annoying kid shows on tv, and be as noisy and creative as they want. These were all of my hopes and dreams until we actually GOT a playroom. Then reality hit me hard. 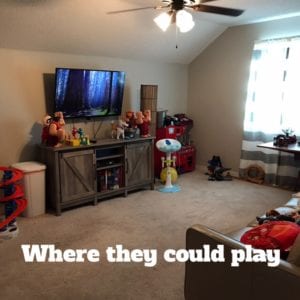 The kids don’t go into playroom. Unless my husband or I go in there with them to “get them started,” they have friends over, or they drive me so crazy that I banish them in there. They have a pretty sweet set up too: couch, tv, play kitchen, weapon shelf, costume rack, giant Hotwheels garage, and lego table. I even let them have drinks and snacks in there. What is turning them off??? It boggles my mind. They have favorite toys that they love, and instead of going in there to play with them, they take them downstairs or to their adopted “spots” on our upstairs loft. Seriously, instead of enjoying the 14×16 playroom full of toys, my kids hangout in 3×8 size areas on the balcony right outside of the playroom. My poor husband lost his home office so our kids’ toys can have a nice room to be abandoned in. 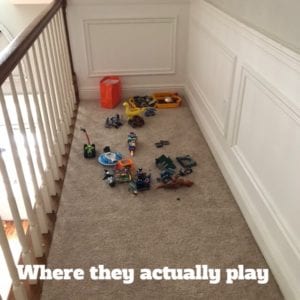 Where did I go wrong? I wonder if it is because my kids were accustomed to having their toys in the living room for so long. Maybe they don’t like being closed off from us. I tried rotating the toys so that it kept the room less crowded and more exciting since the toys got updated. The organization of the toys has changed a few times to make sure things are visible enough. We have done brother sleepovers up there. It has been 9 months, and they still don’t care to play in there. All I can hope is that eventually they will love their space, and until then its great for play dates.

Do you have a playroom? Do your kids actually play in there?