If you would have asked me when we first started having kids what our school plans were, I would have laughed at you. This kid is a newborn. We have yearssssss to think about that. Oh, how naïve I was! Especially here in New Orleans where our school system isn’t wonderful. I also would have never in a million years thought that eight years later we would be homeschooling not one but two kids.

Our oldest daughter Lexi was our introduction into homeschool. I had NO IDEA what I was doing. Have you ever looked into the options for homeschool curriculum? They are overwhelming, and everyone raves about different ones because kids are different. It’s kind of like taking a shot in the dark and praying for the best. The curriculum we chose for her hit a lot of the criteria we were looking for, but the best thing was that it outlined everything. It literally tells you day by day what to do, what the kids do, how to grade, everything that you need to know. It also gives us the option for accreditation which is a major plus because we don’t plan on homeschooling forever. That first year was scary and definitely not easy. I didn’t prepare her like I needed to, so in the beginning she struggled a little. Luckily, she really enjoyed school, so she caught on really quickly. There was definitely frustration on both ends, but we got through it. She really continues to thrive with this curriculum, so we have continued to use it for her. Now we are in second grade, and I can’t imagine not homeschooling her.

We are riding the homeschool struggle bus. 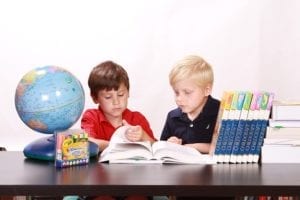 Our son Abram is our middle kid (for now). He is barely five, and we started him on kindergarten curriculum. To be clear, this curriculum has a kindergarten four plan and a kindergarten five plan, and I should have gone with kindergarten four because of his age. But my husband and I decided he would be okay, and we were going to go with kindergarten five. That was a HUGE mistake. Once again, we didn’t prepare him like we should have; he didn’t know his letters, numbers, phonics or any of the basics. Lacking those things made this advanced curriculum really tough for him. I felt like such a horrible mom and person. I had failed him. I hadn’t prepared him enough, I didn’t know how to fix it, I was stress paralyzed on what to do next. I had all the feelings.

For a long time, I thought we were going to have to red shirt him. From homeschool.

Yeah, I didn’t know that was a thing either. But that’s the plus side of homeschooling too. I can watch and see what he is struggling with and we can adjust from there. I had tried everything I could think of to help him, but it wasn’t clicking. I was stressed, he was stressed and it became something that he hated. One day, I realized that we needed to step back and get the basics down before we tried to move on. Moving on was just getting him further and further confused and helping no one. I made flashcards for letters, numbers and blends. We took a week off of school and did flash cards twice a day just drilling it into his head. I wasn’t hopeful that it would help, but boy did it! It finally clicked for him and has been making strides ever since. He is reading faster and easier, he doesn’t get as frustrated, and he is really starting to learn and thrive. It is amazing! I can’t even believe it myself with where he is now compared to where he was.

All of this to say that every single kid is different; they each learn differently and at their own pace. Whether they are homeschooled or go to traditional school, it doesn’t make a difference. Kids struggle and sometimes need that extra help or push. It was hard figuring out how to help my son and very frustrating for all of us. But seeing it finally click and how well he is doing now makes it so very worth it! I am thankful for family and friends who gave us ideas and helped us figure out how to best help our boy. Now I know to prepare these littles much more before we start them in kindergarten. This mom gig is ever evolving, and I learn something new every single day!

To the Mom Dealing with a Diagnosis

Sneaking Veggies Into My Children