Bullies were jerks who used fists, stole lunch money, and picked on nerds – they weren’t people who were using words. Pranks, no matter how nasty or unkind, weren’t considered bullying. Gossiping and slandering were just people being callous. Bullying was an aggressive, physical thing. 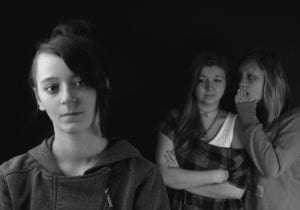 When I was in my junior and senior years of high school (1997-1999), going to school every day was like a test in psychological warfare, and I was losing the war. I stopped confiding in anyone because if I tried to talk to anyone about the maliciousness of my classmates and my insecurities, whatever I said would spread like wildfire through the school. I had no confidants. I cried almost every day before, during, or after school – sometimes all three. Some of my closest “friends” were very much a part of what was happening. My parents did their best to help me cope and were understanding, but they were at a loss. When they and I talked to our headmaster, he gave us the “turn the other cheek” talk. By the time we got to the end of my junior year, I had developed gastro-paresis brought on by stress. There are happy moments from high school, but on the whole, my last two years were miserable. And never once did anyone use the word bullying.

I had two best friends going into my junior year (1997-1998). One of them had become close to my ex-boyfriend in the summer leading up to that year. When he and I got back together, she told me if I ever broke his heart, she would never speak to me again. It sounds so childish now, but it was part of the beginning. It was the start of her talking to me like I was stupid and encouraging others to laugh at me if I had any ditzy moments. As the year wore on and then into senior year (1998-1999), she got meaner and meaner – not just to me, either. I finally spoke up and called her out on it when she was belittling a shy and quiet friend from my art class behind her back, but that only made things worse. I have never felt more betrayed by a friend than those two years of constantly trying to please and placate her and being emotionally slapped in the face again and again. And my other best friend? She did and said nothing. She acted like none of it was happening. That was almost worse.

And then, there was the whispering.

It was really awful in English period because our teacher was oblivious to it. I would come into class, and my ex-boyfriend and his friends and some of my girlfriends would start whispering and glancing at me just to screw around with my head. One particular day that included note-passing, I burst into tears and left the classroom. On an earlier occasion during junior year (after I had been diagnosed with gastro-paresis), a coach who was visiting our History teacher right before the bell rang asked me why I was so skinny and didn’t eat more – the snickering and whispering that went along with that also caused a waterfall of tears, and I fled to the bathroom (my sweet History teacher came to check on me and said it’d be ok if I wanted to sit out that class period).

Twice, my car was broken into. One time, they put trash in my back seat. Another time, they left an empty Jim Beam bottle in the driver’s seat. And during Christmas break of senior year, some of the boys got into the school and set off firecrackers in my locker. When we returned in January, all the pictures on the inside of my locker door were burned up and my notebooks and books were scorched. They were waiting and watching me when I opened my locker door. I made eye contact with one of them who was suppressing a laugh, and then I closed the door and went to class and didn’t even tell my parents until much later. I didn’t see the point. It wasn’t going to stop.

There were other things, pettier things, but this post is already pretty long.

Ultimately, it all added up to a psychological game – what we now call BULLYING.

Second semester of senior year, I had a particularly bad day. It was one of the worst whispering days, and I’d found trash in my car when I left school. I was supposed to go to work but couldn’t stop crying. My mom had become friends with my (ex)boyfriend’s mom when we were dating, and they were walking in her neighborhood which was near our school. I drove through the neighborhood until I found them and pulled it together enough to tell Mom that it had been a particularly bad day, and I needed to go home instead of work. She said ok and that she would call me when they finished their walk.

When I drove away, the questions started.

My ex’s mom knew I had not been doing well but in a small town like ours, it was impolite to press people (even close friends) to share more than they wanted to. The thing was, she and I really liked each other and had spent time together. She was one of my “other moms” – our town was and still is a community parenting town. She was concerned and caring and insisted on knowing what was happening. My mom told her everything that had been happening since the year before and swore her to secrecy. (Getting parents involved in children’s spats generally ended with the hurt kid being labeled a snitch on top of everything else.)

The next day, when I got home from school, Mom asked me if it had been any better. Surprisingly, I said, it had been a good day. Nothing particularly good had happened, but the fact that nothing had happened was good – no whispering or snide comments or smirking. It was almost like I was being completely ignored. And it was wonderful. I went upstairs to do homework, and Mom called her friend.

“What did you do? You had to have done SOMETHING. She hasn’t had a day this good in a year.” And my mom’s friend, my ex’s mother, my other mom said that she couldn’t just sit there and say nothing to her son. I won’t go into the details of what she said to him that evening after my mom and she had walked and talked. I will tell that the very next day, he ended it. I spent the remaining months of senior year under the radar and without incident. When my mom told me what had happened and why things were getting better, I was angry that she had said anything at all. I was also relieved.

I cannot tell you how vindicating it was to have someone besides my family say, “This is wrong.” For almost two school years, the headmaster brushed it off as kids being kids. Teachers ignored it. Friends assisted or became bystanders lest they become the targets. I felt like there was something wrong with me, that I was bringing it on myself. It was a relief to know it could end – there actually were people who could make a difference even if they were ending it because someone told them to. There was relief in knowing it was over.

Here’s where relief in it being over gets tricky, though.

I had the support of my family and ended up with the support I needed from others and the bullying stopped, but for some kids, the relief and respite they find is through self-destructive behaviors, substance abuse, becoming bullies, or suicide. Before bullying was defined in United States law in 1999 when Georgia passed the first anti-bullying legislation in the U.S., people across the country were still making excuses for bullying. They often criticized victims of not standing up for themselves or “asking for it,” and the only relief these other children found was in self-inflicted emotional or physical harm. Not all had the support they needed.

The Definition and The Movement

Bullying is a term no longer associated with the kid stealing lunch money. It is legally defined as “acts or written or spoken words intended to intimidate or harass a person or to cause physical harm to a person or his or her property” (Merriam-Webster.com). Today, all fifty states have anti-bullying legislation. Georgia was the first, and Montana was the last in 2015. We have a National Bullying Prevention Awareness Month (October) with STOMP Out Bullying campaigns across our nation in schools and business and other organizations that educate and address bullying in many different settings including cyberbullying.

It took me a long time to be sure of who I am because of the bullying from high school.

I wonder if the anti-bullying laws we have in place now would have helped me back then – if bullying awareness would have made anything better. It’s a lot to ponder, a lot of ifs. I stopped dwelling on it a long time ago and try to be here and now. In the present, though, it still affects me because I have three children. I have anxiety about them being picked on or excluded, being bystanders and not speaking up or being victims and not saying anything. It will always be a part of my every day in this way. To counter the anxiety, I encourage them to choose friends who will embrace others and help friends who need a hand with meeting people. They are instructed to always, always, always speak up if they know there is a problem. I remind them all the time to say something if they see something. Because it only takes one person to make things better.

Here’s how you can help stop bullying:

Think It Can’t Happen to You … Think Again!