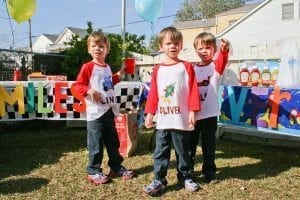 In less than a month, my boys will be turning six, and unlike in previous years, I have done almost nothing to prepare for it. I guess that’s just the way it goes. For their first birthday party, I had the invitations printed by September. For the second, I was in full Martha Stewart mode by August. For the third and fourth, homemade cake pops were involved. But last year, when we invited all three of their classes, plus neighborhood friends, I think I may have burned myself out. That’s 75 kids, plus their parents. Each boy picked his own theme, and I had to send out four different invitations. It was all too much.

I decided that by the time they were in kindergarten, they’d be old enough to select just a few friends each to invite. Maybe I was a tad optimistic, because I’m still looking at 30+ kids (a “few” grew into 8-9 each.) And this time, we’re having it at home instead of at our neighborhood park.

I feel terrible only inviting some of their classmates, though. I can only hope for understanding from parents of uninvited kids – surely they can’t expect me to invite everyone every year, right? I know there are parties we aren’t invited to, and I’m grateful, not hurt. This is one of those occasions when I cross my fingers that I’m getting cut some slack for having triplets.

So right now, I’m working on the invitations (evites, because we can’t distribute invitations to school if everyone’s not invited) and in a fit of laziness, desperately want to send one out to everyone saying, “don’t feel like you have to bring a gift for all three, consider this invitation only from the boy your kid is in class with” but even I know that’s tacky. (And I know many people go the “no gift” route, but I choose not to do that.) So four invitations it is. One for Linus, one for Oliver, one for Miles, and one for friends of all four. 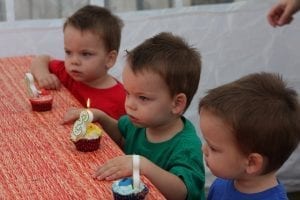 But I’m excited to have a party of a manageable size. I won’t have to buy lovingly hand-craft a thousand cupcakes or worry about feeding hordes of kids and parents. I’ll bake a cake, think up some games, and hope my house is still standing by the end of it.

I feel like in almost every aspect of parenting, we are truly reaping the rewards of triplets. The first few years were very rough, but now I truly believe we have it easier than parents of three kids of different ages (don’t tell anyone I said that, though.) But this is one of those unique challenges that we’ll always face as parents of multiples, and I just want to get through it with some grace.

Parents of older multiples, any tips for birthday parties as they get older?

Summer is the best … and the worst

My Kids Were Guinea Pigs {Our Experience with the COVID Vaccine...