In the beginning of the summer, my friend mentioned all the doctors appointments she had to make for her kids, and one was the eye doctor. My immediate response was “why? they are so little! I have ZERO concerns about my boys’ eyes.” Oh the irony in that statement.

Not even 2 weeks later, I suddenly had concerns about my oldest. On a routine bike ride in our neighborhood, my oldest proudly told me all the addresses on our side of the street. When I asked him to tell me his aunt’s address across the street, he nonchalantly says “oh Mama, I can’t see that. I need to get closer first.” Ummm WHAT?!?!? 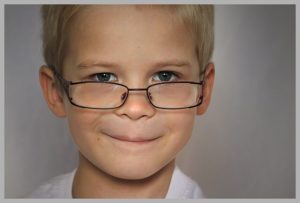 My sweet boy who never squints, thrives in school, and never once complained about not being able to see is now telling me he can’t see large black numbers on a house in the middle of the day. I decided to test him with a speed limit sign from a distance. I asked him to tell me the numbers, and he could. However, when I asked him about the smaller letters, he said he needed to get closer. My gut told me the whole thing was too casual and off the cuff for him to be playing tricks on me. I needed to get him screened by an eye doctor. Luckily I know a pediatric optometrist, so I didn’t have to research who to call. We were able to get an appointment for the following week.

Leading up to the appointment, I was nervous. As someone with terrible eyesight myself, I didn’t want him to have to start dealing with this at such a young age. Nobody in his class wears glasses. I could only think of one or two kids in his small school with them. What would we do about sports? Would this be too much responsibility for a kindergartener? When I spoke to him about he upcoming appointment, to my surprise, he was excited. He loved the idea of getting glasses! Which, of course, made me nervous that he would try to fail the exam on purpose.

Luckily, I have not had to take my children to many specialists. I have to say we had a fantastic experience with his first appointment. A pediatric optometrist was the way to go for us. The staff was great with both the patient and his anxious little brother. They did a very thorough screening to test for all possible scenarios. He was diagnosed as near sighted and prescribed bi-focal lenses. The bi-focals are suppose to slow down the progression of his near sightedness. He was so excited to pick out and try on frames, and he cried when we left without the glasses.

My sweet 5 year old is such a trooper with his glasses that he has erased all of my apprehension and fears. He works very hard at being responsible with them and is following all of the rules we put into place. He knows that his friends can’t try them on and that they go from his face to the case. His teachers also help him at school by keeping a case in the classroom and reminding him to take them off before recess and PE. We are still figuring out some things, such as sports. My baby makes my heart so happy with how proud he is of his glasses and the pride he takes in taking care of them.

Galentine’s Day with the Girl Gang