I work full time. My husband also works full time. We have three amazing children, aged 5, 3, and 10 months. Logistically, this is pretty much a nightmare. My job is not very flexible. My husband’s job is flexible at times. We have no family in town. I mean none. Our closest grandparent lives about 5 hours away. This week, it really came to light just how slim my margin of error is before everything comes tumbling down. Sick kids, work deadlines, lack of sleep … all of this contributed to things getting lost in the shuffle. 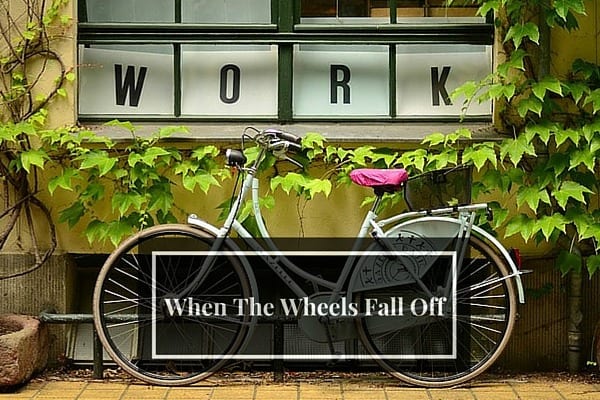 Let’s rewind back to Saturday, when it all started. We had family in town. It was great. The kids were occupied by their grandparents and cousin. They spent some time before the rain running around at a tailgate. I decided to run errands instead, and when I came home, my middle child was just waking up from a nap. Normally a good thing, right? Well she woke up with a high fever. She was sick and miserable. Tylenol helped. But the moment it wore off, the fever spiked. When this was still going on Sunday night, I started to panic. My husband and I both had work on Monday. The grandparents were leaving in the morning. Who the heck would watch my sick kid? I managed to beg the grandparents to stick around for the morning and watch her so I would only have to take half a day instead of the whole day. Monday night, though, she was still not feeling well. We decided that my husband would stay with her Tuesday.

Monday night proved to be miserable. The baby started getting sick. I figured he was battling another ear infection since he was waking up all night and having trouble nursing and getting comfortable. But he had no fever so off to school he went on Tuesday. Tuesday morning, my husband called and said he would have to go to the office as soon as I got home from work. I cut out a little early and ran home so my husband could go to work. Oh and the baby? Well, he was now pulling on his ear and crying when he tried to nurse. He also had snot pouring out of his nose. So gross. Yep. I am sure he had an ear infection. But at this point, it was like 4pm and I was not about to drag three kids alone to urgent care for an ear infection. So I gave him some Tylenol and called it a day.

Wednesday … middle child was finally ready to go back to school. The baby still had an ear infection that I had no time to handle. I could not take more time off of work this week. My husband couldn’t either. We decided to give him some of the antibiotics left over from his previous ear infection, which was about a month ago. Why did I not think of this genius idea sooner? Hahaha. Oh, and did I mention I woke up that morning and realized we were out of yogurt? (Side note: How the hell did my kids eat 13 yogurts since Saturday?) Looks like I will be dragging kids to the grocery after work. Luckily, I only had to take 2/3 of the kids. But since I did that, it meant picking up the oldest from school later than usual. You know who had to hear about that for at least an hour? This gal. Wednesday night, I thought about figuring out how to take him to the doctor for Thursday but then remembered that I was chaperoning a field trip at work. Ok, guess Thursday isn’t happening, kid. Here’s some more old antibiotics.

Thursday came and went without too much fanfare. The baby mostly slept all night and the big kids were on the mend. But guess who is getting sick now? Me. Guess who still will be heading to work, etc? Me. Oh well! Friday morning. Glorious, Friday! I have a half day at work. I finally managed to schedule a time for the baby to head to the doctor. My cold is annoying but not the worst. And Saturday is in sight.

Weeks like this make me wish I lived closer to family. They also make me realize how much of a balance it is to work and raise kids. I question my competency as a mother. But this too shall pass. In the meantime, can anyone tell me where my 3 year old might have hid her school shoes? Also, pass #allthewine.

Disclaimer :: On Friday I DID take the baby to the doctor. She assured me that it was completely fine that I waited to bring him in for treatment. He did have infected ears but they weren’t too bad. Andalso, as much as I thought The Sickening was over with, my husband and I were hit hard over the weekend. There Is Another Way: My Unmedicated Birth Story