Two months ago, we began a baby-led weaning approach to solids with our second child, Cora, then six months. As I detailed at the time, we had a great beginning and liked the logic and the ease of this foray into solid foods. The philosophy is simple and, excepting the last hundred years, timeless: let the baby feed herself when she is able. At six months, Cora was sitting up, interested in food, and able to grasp small objects. This age is the ideal time to begin baby-led weaning because it allows a baby to do with food what she is doing with every other item anyway – put it in her mouth.

I can offer an objective view of baby-led weaning because I took the more common route with my first child and spoon fed him purees for the first few months. More than two months into the second go-round, I wholeheartedly endorse baby-led weaning. Cora quickly mastered picking up different shapes and textures and has learned how to make each new food work for her (i.e. get into her belly!)

And I’ll let her picture speak for itself.  She continues to gain weight and thrive! 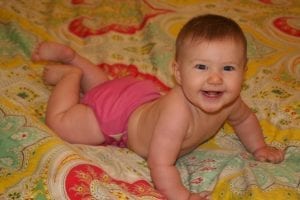 The first few weeks, I tended to just give her plain foods: apple and pear slices, steamed or roasted squash or potatoes, but by 7 months, I embraced the wonder of baby-led weaning which is that you can give your baby exactly what everyone else is eating. No separate preparations needed! This saves time and energy as well as ensuring your baby gets exposed to a wide range of foods.

Nutritious eating is very important to Jacob and me, so we naturally wanted to make sure Cora was eating as healthy a diet as her brother did when he was given the organic purees we so lovingly prepared. We eat healthily at our house, but this new member at the table has pushed us to higher levels (for example: to include more vegetables at dinner and to vary lunch time foods).

Cora loves mealtime without exception. We pull her highchair up to the table, put on a bucket bib, and she is just as much a part of our meals as her brother. From crawfish to canteloupe and from papaya to pasta, I can’t say she’s disliked any food. She had a harder time at first managing certain foods (like slippery bananas or smaller pieces), and she would bypass these in favor of ones that were easier to hold. But within a few weeks, she adapted to be able to handle most foods. She’s like a little scientist, figuring out the best hold for a food and inspecting it from all angles. We had to smile the day she finally figured out how to retrieve the food she drops into her lap.

One thing we were curious about was how to introduce foods that are runny or that you would otherwise typically eat with a spoon. I liked the idea of keeping Cora in the driver’s seat, and I wanted to hold off on any spoon feeding until she really got the hang of feeding herself. This meant that at first I was giving her hand held foods at breakfast while the rest of us were eating oatmeal. I started also offering her a loaded spoon of oatmeal or two along with her other foods. Naturally this was disastrous the first few tries, but I was surprised by how quickly she took to taking the spoon from me and eating the contents off it herself. The next step will be to give her both bowl and spoon. 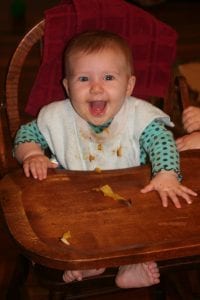 I agree with the book (Baby Led Weaning: The Essential Guide to Introducing Solid Foods), and probably with most other parents who’ve tried this, that the one big downside is the mess. With both a 3 year old and an exploring baby, every meal ends with a parent on their hands and knees cleaning child, chair, and floor. In the past few weeks, I’ve worked in several picnic lunches to our day just to avoid having to clean the floor. Again.

The other challenge I see is that to try this approach with your first baby would require a relaxed nature (not something I usually have). The first month is going to be slow steps, and you have to trust that the baby is getting what they need from their milk feedings (which is where the bulk of their nutrients should be coming from). If you are nursing, you also have to be prepared for a slower phase out of nursings. At this point, Cora (at 8 months) is still nursing the same frequency as she did at 5/6 months. This isn’t a downside to me, but it’s good to expect from the start that a baby-led weaning approach means a slower transition to solids.

Here’s a look at Cora in action over the last month (between ages 7-8 months). You’ll see she has a wide range of tastes: pasta and broccoli (from a pasta dish), apple, banana, bread, cauliflower, pear, mango, tomato, pieces of a fritatta, corn on the cob, and mashed potatoes.

What does baby-led weaning look like at your house?

Mom vs. The Nap