Birth is not a contest, nor is it always a medical act. It is not something one has to be “pro” or “anti” with regards to where children are born. Almost daily, I hear or read something from someone condemning another kind of birth. Many people are staunch supporters of hospital births, deeming homebirths dangerous or too risky. Others are huge homebirth advocates who constantly go on and on about the unnecessary interventions and risks of hospital births.

There is a middle ground.

It is a fact that our country is woefully behind on healthy birth outcomes. What once were “use only when necessary” interventions have become routine, and yes, those routine interventions can lead to complications. Hospital advocates, we need to address this problem and work to fix it. Changes are already being made: the hospital where I delivered is working to actively reduce their c-section rate, and I commend them. However, the rate was 50% before they took certain measures, which is much higher than the national average. Even still, Pitocin and other interventions are commonplace at this hospital. These interventions lead to more interventions, unnecessary major surgeries, and a host of complications. Instead of ignoring these facts and excusing the overuse of medical interventions, shouldn’t we work to make hospital births safer? Shouldn’t trust our bodies more? Shouldn’t we commend the physicians who are trying to make changes from within? Shouldn’t we advocate for ourselves and not go into birth blindly “trusting our doctor.” I trusted my doctor. She is an amazing OB. But I still did research about the policies and procedures at my hospital and discussed them with her, ultimately refusing many of their routine interventions. If you are convinced that a hospital birth is the best route for you, that is wonderful. But that doesn’t mean women who select home birth are doing something dangerous or irresponsible. And I implore you, instead of criticizing mother’s who wish to birth at home, let’s work to make home births a safe 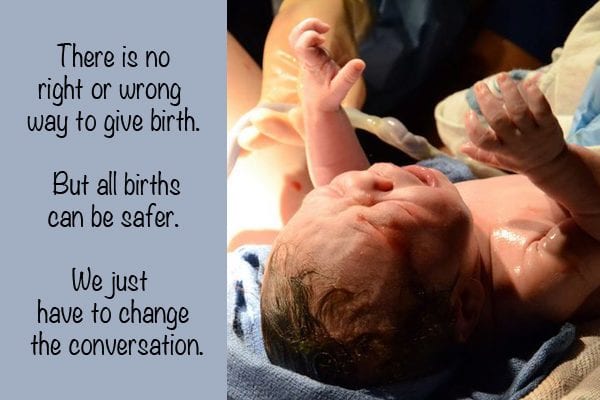 , viable and legal option for those low-risk mothers who select that path? The data is there to support it as a safe option.

Before you get too excited homebirth advocates, know this: ignoring or glossing over bad outcomes in homebirth does nothing to further your cause. In fact, all you do is create distrust amongst those seeking homebirths, and give ammunition to hospital advocates. “SEE, homebirth IS dangerous… and they don’t want you to know.” These stories need to be told. These women need to be given a voice so we can figure out where the problem lies and how best to address it. Was the provider not properly trained? Was it because homebirth is still illegal in some places so they were scared to call for help? Would a hospital transfer have helped? We cannot work to rectify problems if we deny or downplay their existence.

Recently, I read a home birth story online. It is written by a woman named Ashley who detailed her honest experience regarding the complications with her home birth. It is a story that deserves attention and respect from the homebirth community, yet it is getting neither. Home birth advocates have been anything but understanding to this woman. They blame her. They have tried to silence her. They accuse her of lying. Why? Because she had a negative homebirth experience? Because it might turn some people off from home birth? That is not good reasoning. We need to have informed consent regarding the possible risks of both home and hospital births. I have to wonder if those who are intent on trying to keep Ashley from telling her story would do the same to a woman who had an unfortunate hospital birth.

On the flip side, when those who are against home births (for everyone, not just themselves) hear a story like this, they use it as leverage against home births, touting the safety of the hospital. However, when routine interventions in the hospital turn deadly, those same people call it “rare” and never let those stories affect their perception that hospital births are the safest choice.

No matter what you decide regarding the place and way you give birth, you should be able to understand and respect the choices of someone else, especially another mom. If someone nearly loses their child at home and that makes them want to deliver in a hospital next time, we should be understanding, rather than, “Told you so!” or “You must not have done homebirth right.” And if someone has an awful hospital experience that leaves her traumatized, even if the mom and baby are okay, we should support her, not tell her to suck it up because she and her baby are alive. Shouldn’t we want more than just “not dead” when it comes to the care surrounding one of life’s largest events?

We have to change the conversation around birth. Not all hospital births are doomed to end in trauma for mother and/or baby, and not all home births are peaceful. Most people seem to latch onto one side or the other and use individual stories to further their own preconceived notions. Birth can be beautiful, no matter the location. Birth can be risky, no matter the location. What matters most at the end of the day is that the mother is informed about her options and chooses the setting that she feels is the safest, best option for both mother and baby.

It is time we stop blindly defending our side and work together to improve birth for all women.

Visit One of Florida’s Best Beaches with Allegiant

I’m Not a Cool Mom