Two is our lucky number.

After two years of trying, we were working with doctor number two (our fertility specialist), and we finally had two eggs. Not great odds, but there were two, not zero, and we were thrilled. Two weeks later, we saw two pink lines. Those lines eventually led to our precious twin boys!

I’m a very honest and realistic person by nature. In my professional life, I plan, execute, sometimes prepare for the worst, pray for the best, and fix any issues in between so, I knew carrying twins on my 5’ frame would be tough. I began preparing myself early on for a difficult pregnancy that would likely include a c-section, preemie babinos, and some tough situations. Obviously, our hope was that it would be a perfect pregnancy and delivery, but having a very realistic outlook on the situation helped get me through it. Well, that and telling myself to just breathe and stay positive, which I had been doing since I first saw those two pink lines. 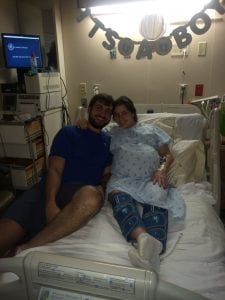 Long story short, it’s a good thing I had emotionally prepped myself!

Due to Twin to Twin Transfusion Syndrome, I went into the hospital at 23 weeks and stayed put until I had the twins at 31 weeks, 6 days. How in the world does one cope with being in the hospital for nearly 9 weeks you ask? My answer is simple. I was surrounded by amazing people. My husband spent every single minute that he wasn’t working at the hospital with me. My doctor was fantastic – visiting every day and being 100% in control of my medical treatment. My parents, in-laws, and friends took turns spending the day with me, and even brought my pup to the courtyard of the hospital to visit. My nurses … I don’t have enough good things to say about the incredible nurses that took care of me and worked (really hard) to find the heart beats of my babies multiple times a day. They, and eventually our NICU nurses, became a BIG part of our family.

When you spend 14 weeks at the hospital, you see A LOT. 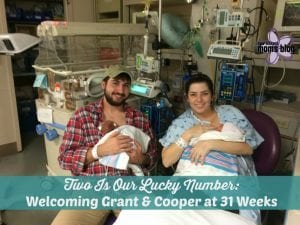 You see people come and go, and you get to know the families of the other patients. As we were dealing with my extended hospital stay and our twins NICU time, we celebrated and grieved with those around us. A dear friend lost one of her twins, a momma delivered her tiny triplets and they did wonderfully, one of my wonderful nurses lost her precious baby boy at 37 weeks, while another friend delivered her handsome son after losing a baby prior. My husband and I made it a priority to remain as positive as possible! The only way we were able to do that, as we rode the roller coaster of sadness and happiness while in the hospital, was to remind ourselves that our boys could feel my emotions too. It continued to be important to focus on them and to just breathe and stay positive.

I held out 6 weeks longer than my high risk doctor had anticipated and on June 10th, Cooper and Grant arrived, weighing in at 3 lbs, 9 oz., and 3 lbs, 4 oz., respectively. By the time the twins came, I had been contracting since 20 weeks, battling high blood pressure, and had undergone 7 amnios to keep the TTTS under control. Despite all of the obstacles, we were thrilled that our twinfants got 31 weeks and 6 days of baking time.

The boys cruised through the NICU until the night before we were supposed to room-in with them.

Grant became sick from an inguinal hernia. Leaving the hospital without your baby is one thing, but leaving the hospital with one of your babies, while the other is left behind, sick, is a completely different ball game. As I held Cooper for the first time at home, I cried. Tears of happiness with Cooper and sadness for Grant. I gave myself 15 minutes, then pulled it together. My boys needed me so I told myself to breathe and stay positive.

It all came full circle, as life tends to do because those two phrases and our two doctors got my two babies and their two parents through it all. 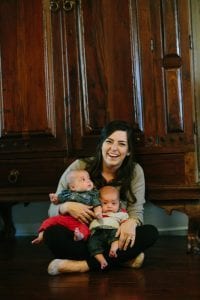 Erin is a Baton Rouge native who fell in love with New Orleans 5 years ago after moving here with her husband. She’s been with her high school sweetheart, Jake, for 10 years and is a graduate of the LSU Laboratory School and LSU. Together, they have 5 month old twins, Cooper and Grant, and a dog-ter, Miss Lily. Coming up on her 5 year anniversary with Raising Cane’s Chicken Fingers, Erin is the Marketing Advisor for the Greater New Orleans area and previously worked for Mary Bird Perkins Cancer Center in both Baton Rouge and Covington. Her personal blog can be found at The Best Kind of Crazy.

Girl Vs. Grill: Eat Your Way to a Healthy Summer

The Tween Segregation :: What I Realized At My Son’s 9th...