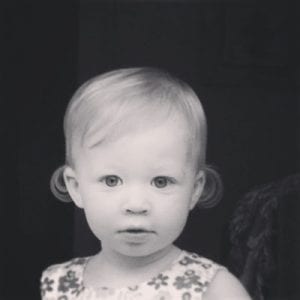 In early March, Mark left to go out of town for drill with the Louisiana Air National Guard. Jane was just turning 15 months old, and she was showing signs of what I was certain was her fourth ear infection in as many months. She and I were staying with my parents while Mark was out of town so that they could watch her while I was at work that weekend to keep up with my tax season duties. After about an hour of sleep, Jane woke up and cried and cried and cried. It was the kind of crying that we had come to know as the first sign of an ear infection. I gave her some Advil, but the pain seemed to continue. So at around eleven o’clock at night, my parents were gracious enough to escort Jane and me to the emergency room.

After about thirty minutes of waiting and a whole lot more crying, we finally made it in to see a doctor. My relief in seeing her enter the room was quickly tempered by the utter judgment she expressed when she saw a bottle sitting on the bedside table. “How old is she exactly?” she asked. “Fifteen month,” I squeaked as I saw her eyeing the bottle.” “You need to get rid of that bottle.” She said it in a tone that was so harsh and so critical I wanted to cry. Then I realized that it was almost midnight and my child had been crying for the last three hours, and I had to be at work at six in the morning the next day. I was not there in the middle of the night to ask her what she thought about when to wean a baby from her bottle. I wanted to scream at her for judging me. But mostly, I wanted to curl up into a ball. When had my baby become a big girl????

Fast forward two months, and I still wasn’t ready to transition Jane from her bottle. That is until last week when I pulled up to our house to see Mark holding Jane in his arms. She was waving at me with her big grin and welcoming me to the porch with a loud and joyous, “Hi-eeeee.” The second I got close enough to see that she had come home from school with the two tiniest pigtails anyone has ever had, I wanted to burst into tears. She was not a baby anymore. I have no idea why I needed a hairstyle to tell me this. The ER doctor was clearly trying to, and that was eight weeks ago.

That night, we decided that our big girl was going to go to bed without her bottle for the first time in her life. I was so anxious for her. I worried that I was imposing this huge change on her without being able to explain to her why. As she ate her dinner, she drank all eight ounces of milk in her sippy cup. Whew! I felt so much better just knowing she was full. Now for the big moment. We made the slow march up the stairs to the nursery. We rocked and she looked up to me and said, “baba, baba.” “No, sweet girl. No, baba tonight.” And at first, she looked at me with such a dramatic pout. Then, she leaned her head to the side and said, “book?” And that was it. Had she been ready for this transition the whole time? Was it me that was holding her back?

As I walked downstairs, I realized how sad I felt. My baby girl was no longer a baby. I missed giving her her bottle. I missed the quiet moments we shared as she would gulp down her milk and put her small hands on my face. I missed seeing her big wide eyes staring into mine. Every night, I felt like I could see her just like it was the day she was born. I was not ready for this step!!!

I had not expected this to be as emotional for me as it was. We recently asked you, our readers, to share your experiences with tricky transitions, and what I learned is that every one of us has experienced some kind of challenge. Whether it is going from a crib to a toddler bed or pooping on the potty, there is just no way to prepare for what comes next in parenting.

I also learned that I am only beginning to go down the road of transitions. One of our readers, Jenny, said, “As the Mom of an older boy, I will say 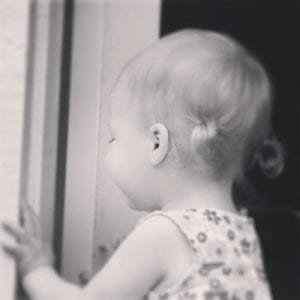 this week has been the most challenging transition for ME…. the discovery in Disney world last week that my sweet 10 year old needs deodorant and coming home to giving permission that he can attend puberty class in school next week. UGHHH, I’ll take potty training or getting rid of the paci any day.”

The good news is that I have also witnessed through what you’ve shared that as time and space separates us from these trials, we can eventually find humor in them. Another mom, Anna, shared the following story about her daughter Arabella. “When we gave the Easter bunny Arabella’s paci’s a few years ago, Arabella kept crying out from her crib, ‘But I’m still so little! I need my paci!  I’m still a baby! Look how little my feeps [feet] are!!'”

So far, for Jane and me, I have shed more tears over her transition from a bottle to a sippy cup. I have no doubt that will be reversed when we send the paci away. I know that I cannot stop time. All I can do is hold onto the moment and soak in every ouce of joy Jane brings to our lives.

But, don’t expect the paci to go anywhere anytime soon! It’s one transition at a time for this family!

What was the toughest transition you faced? How did you get through it?

Reflections on Making Marriage Work … Even After Baby

My Afternoon With The Stylists from ALG Style {Sponsored}