As I shared a few months back, we are expecting a new addition to our family this coming November. As excited as we are to see our family grow, my mind is constantly cluttered with the to-dos of preparing for a new baby. To add to that mental clutter are the list of toddler transitions that Mark and I felt were important for Jane to conquer before the baby arrives: getting rid of the pacifier and her lovie, getting her into a big girl bed, and getting her potty trained.

Step One: Setting Boundaries for the Pacifier and Lovie

We started with this first because she had gone from relying on her pacifier and her lovie for comfort purposes to talking (in a slurred speech) with the paci in and holding lovie every minute of the day when she was with us. The thing was – she only used it WITH US. At school, she had completely given them up. How had we let this happen? I swore I would not be the parent in the restaurant with the two year old sucking on a paci. 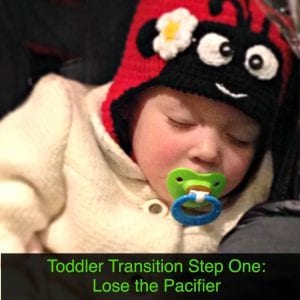 So about a little over a month ago, we sat her down and explained a new rule:  her pacifier (papi as she says) and lovie can only be used in the car and to go to bed. I would say the first two weeks of implementing this new boundary were hell. I’m just not sure though that describes how painful it was to fight this battle each and every day. She strongly resisted the change and threw an all out tantrum every morning when we left paci and lovie in her crib.

It was awful. And there were so many moments where I was tired – tired from tax season, tired from pregnancy, and REALLY tired from all of the crying (hers and mine). It was so tempting to give in and just let her have them so we could all spend a morning together in peace. I don’t know how, but we managed to stay strong and resist that temptation.

There were a few funny moments that kept us sane. One morning, I saw her sitting on the couch and she reached into her pajamas and pulled out a paci she had stashed away. She was so proud of clever self that I couldn’t help but chuckle. There was also the times when she would tell us that she needed to rest. We’d bring her to her room to do so, and then watch on the monitor as she got her paci fix. We usually got called to rescue her about twenty minutes later. After about three weeks, I think she finally adjusted to her new routine and the fussing stopped. She certainly reminds me that we are in the car and she can have “papi,” but she rarely requests it otherwise. Once we crossed that bridge, I just figured we’d have to cross the others.

Step Two: A Big Bed for a Big Girl

One of my biggest fears about growing our family was how it would impact Jane. I know that her world will be rocked when the new baby arrives, so I wanted to limit how much transitioning we were doing when the baby arrived. Jane started say she was “too big” for her crib back in January.  She was just over two at the time, and it was right around when we were starting to talk about trying for baby number two. It planted a seed that we needed to start thinking about the transition to a big girl bed sooner rather than later.  The more I thought about it, the more I realized I really wanted the transition from the crib to be happening because Jane was 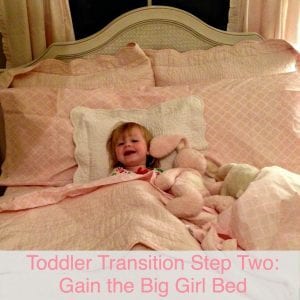 READY and was a big girl rather than because she was a big sister. We have been very careful how often we use the term big sister and try to keep it in the context of how lucky we are that she will be such a big helper. So I wanted her to really feel like we were celebrating how great it was that she was a big girl by giving her this great big girl room rather than focusing on the fact that the new baby needed the crib.

When we designed her nursery, I wanted furniture that could go from baby to teenager. The set we got had both a bed and a desk that matched, and it seemed like the perfect time to make the change. When we took her through it last night, we talked about how only big girls get to have special things like desks with lamps and big girl beds with lots of pillows. I think she really got the fact that it was a very special occasion. She had a hard time settling down that night when we put her to bed. We would be in the middle of a book, and she’d pop up and say “I a big girl. I have a big girl bed. It’s very very very beautiful.” It was so sweet to see how excited she was. I’m really hoping that will alleviate some of the jealousy she might have felt if we switched her just as the baby was coming.

The first night’s rest for her was great! She slept like a baby in a big girl bed. For us, it was like having a newborn again. I was up all night making sure she didn’t roll off. When I woke up, Mark wasn’t in our bed. I found him sleeping on the floor outside of her room. He said he thought he heard something and wanted to be closer to her. We did end up getting these great bed rails by Regalo that have helped  us sleep more soundly.

The hardest part of this particular transition was that we no longer rock her to sleep. I knew that would have to end at some point, and I don’t know that I would have ever been ready for it. We have developed a new routine of laying next to her and reading a story and singing a song, but nothing will beat the feeling of holding her in my arms and singing her to sleep just like I did when she was a baby. I suppose I hadn’t considered that some changes would be harder on me than her.

Ha! I wish I had better news to report on this front. Jane was more interested in potty training at 18 months than she is today. But, my friends, that it a story for another post. Wish us luck!

What toddler transition did you struggle with? Did you try to get your older children adjusted prior to bringing home your new baby?

A Letter to My Children About Hurricane Katrina: You Are Our...

Working Mom Diaries: If Only I Had It All Together