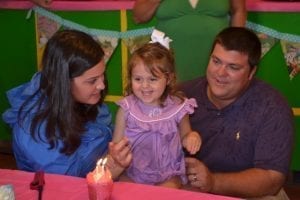 My daughter turned two this past week. We are now officially out of the baby stage and completely in the toddler stage. It was bittersweet and very emotional for mommy. But I could not focus on that, I had a party to throw.

We held her first birthday party at home but decided to hold her second birthday party somewhere else. I looked around and decided on Storyland in City Park. If you are considering a party there, here is how it goes:

I went on the City Park website which has all of the information about children’s birthday party options. They break it down for you, but essentially there are three options of locations in the park, and you also decide if you want ride bands for the amusement park included or not. 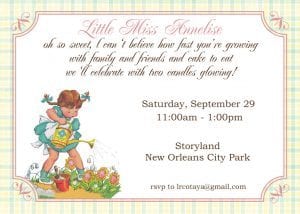 After that decision was made, I called the Storyland events coordinator. I selected my date, put my deposit down, and she mailed me a packed of information. Super easy. (Remember the earlier you call, the better choices of dates you will have.)

I decided to stick with the Storyland theme, and Annelise’s invitations featured a rhyme to Mary Mary Quite Contrary and were designed by local mom, Laura, of Love B and P Designs.

For the party you have to bring everything in with you, including ice. Storyland provides tables, chairs and trashcans, but everything else is on you, which for me is totally fine. I used standard Party City paper products. (By the way, if you are doing a party in the Storyland cottage it takes two Party City table cloths to cover the picnic tables and two unfolded halfway to cover the buffet.)

I didn’t want to worry about keeping food hot so I stuck with basics that would be okay from my house to the end of the party. The menu included salad and bread sticks, Greek pasta salad, chicken nuggets for the kids, croissant finger sandwiches, pinwheel rollups, veggie and fruit trays, cinnamon roll dippers, funfetti dip, a Storyland cookies assortment from the cookie lady and cupcakes. 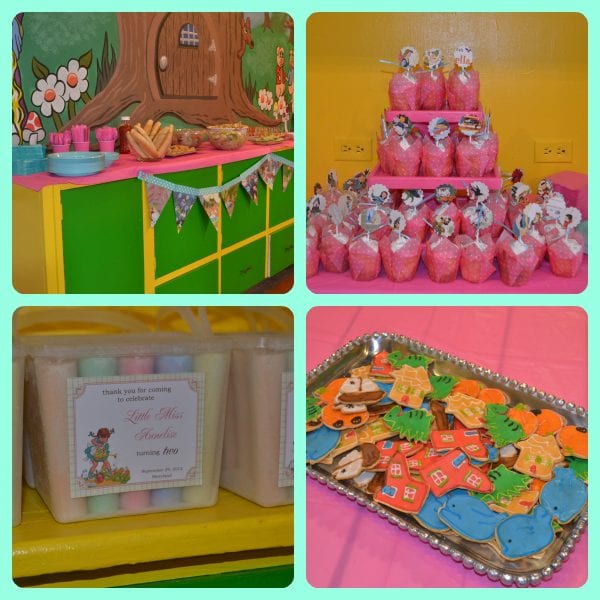 I settled on cupcakes because I thought it would be easier to serve in the Storyland cottage than a traditional cake. My cousin made the cupcakes, which were super cute, and I added cupcake toppers to them. The toppers were made from lollipop sticks with storybook cut-outs hot glued to them and tied with ribbons.

I also cut a banner from storybook pages to hang across the buffet table to add a little color and tie in her theme. The party favors were sidewalk chalk buckets with a sticker on the front to match her invitaitons, also by Love B and P Designs.

The staff at Storyland were very nice and did a great job checking on us and getting us things that we needed. The rain even stopped for a while to let the kids go out and play.

I think the location was a good mix for the adults that wanted to stay inside or wander the grounds to socialize and the kids who wanted to run around and have fun. The park was roomy, and there was never a line for any of the exhibits or the craziness that sometimes exists at kids’ attractions. The age of the children there also skewed a bit younger, which was good for us since my daughter is two. It gave me a little peace of mind that she was not on the exhibits with older kids playing rougher than she can handle.

Even though it was a little gloomy with the rain, the party was a success and my daughter had a great time. One last tip: If Storyland closes due to weather you can reschedule or get a full refund.

What’s your favorite location for children’s birthday parties in the New Orleans area?