I just want to start off by saying thank you to all of you for supporting us and helping to make our launch week so successful!  If I could reach out through the computer screen and give you a huge hug, I wouldn’t hesitate for a minute.  Don’t forget, the giveaways run through Friday night, so you still have time to enter!

Well, I can’t say that I was born in New Orleans, since I was actually born in Jacksonville, FL where my dad was stationed while in the U.S. Navy.  However, both of my parents were born and raised in Algiers and returned back home shortly after I was born.  Growing up, we participated in all of the typical New Orleans traditions like King Cake on Fridays during Mardi Gras, Saints parties on Sundays during football season at my Grandpa’s house, and Christmas in the Oaks at City Park.  After high school, I enrolled in Southeastern Louisiana University in Hammond, and upon graduation, moved to Mandeville when I was hired on full-time at the company where I interned. A couple of years later, I met my husband Michael, and we dated for three years before getting married in 2008.   Having been born and raised in Mandeville (in the same house we now own), he informed me shortly after we got together that he was most likely never going to move out of Mandeville.  Well, we’ve made some progress, y’all – he agreed that we can move north of I-12 one day!

Since we had been together for a while, we knew we didn’t want to wait too long before starting a family.  Unfortunately, we learned very quickly that sometimes things do not go as planned.  We suffered three heart-breaking miscarriages before seeing a reproductive endocrinologist in the fall of 2010.  After more testing than I care to remember and a very expensive experimental treatment, we were finally experiencing what seemed like a healthy pregnancy in the spring of 2011.  We both shed some tears when we were able to hear a heartbeat for the first time.  We waited the obligatory twelve weeks before announcing our good news to anyone, with the exception of our immediate family (and my sorority sister in Dallas who had to be filled in while I was visiting when she wanted to go wine tasting).  At fourteen weeks pregnant, the night before Easter Sunday, our world fell apart.  I lost my amniotic fluid, and we were given a less than 1% chance of having a take home baby.   Weeks of bed rest later, three of them hospitalized, and after steroid injections and magnesium drips, Addison Rose was born on July 30, 2011 at 28 weeks and 3 days weighing two pounds, two and a half ounces.

After spending sixty days in the NICU at Woman’s Hospital in Baton Rouge, we were finally able to bring our baby girl home on September 27th weighing four pounds, twelve ounces.   Since her lungs were underdeveloped, she came home on oxygen and an apnea monitor.  Since then, she has passed her sleep study and no longer requires oxygen or the apnea monitor.  She is developing and meeting her milestones on track for her adjusted age of nine and a half months.  We have a lingering issue with her dislocated right hip, but if that’s our biggest issue, then I’d say we are doing pretty well.

So naturally, we have been thrilled with her progress!!  Fast forward to a few months ago, when I dove head first into planning Addison’s first birthday party.   If you think about it, no baby ever remembers their first birthday party.  It really is all for the parents, family and friends.  And in our eyes, Addison’s first year of life really deserved a huge celebration!   I had already chosen the colors that I wanted for her birthday celebration, but the big questions were where do we have it, who do we invite and how much do we spend???

Where do we have it?

We decided to have it at our house this year.  With her birthday being in the middle of the summer, we didn’t really feel like there were many age appropriate places to have her first birthday party indoors.   I know we are just now getting the last of the birthday decorations out of the house, but I’m already brainstorming some ideas of where we can have it next year.

Who do we invite?

Coming home at the height of RSV season, we were under a pretty strict quarantine from our many doctors.  We didn’t allow anyone with children to come into our house, and we only took Addison out of the house for doctor appointments.  Since the majority of our friends and family hadn’t met her yet, we knew we wanted to include them on the birthday invite list.  And the more we thought about it, we couldn’t leave anyone off.   So, brace yourselves, our guest list for Addison’s first birthday included sixty-two adults and thirty-four children!!  Even looking back now, I know there are friends and family that were overlooked, and I feel absolutely horrible about that.

How much do we spend?

I will just say that we didn’t set a budget, and I don’t even want to know how much it all added up to in the end.   Next year, I’ll be better about it.  Especially since all Addison was really concerned with were the ribbons and tissue paper.

Even though we crammed way too many people into our house, and our air conditioner did not cool off below 81 degrees, I think Addison’s first birthday party was definitely a wonderful representation of the celebration of her first year of life!

Now it’s your turn.  How did you celebrate your child’s first birthday?  Did you go overboard, or are you saving that for when he or she can remember it? 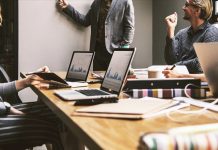 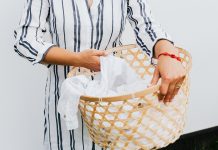