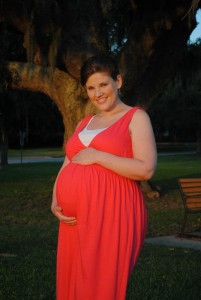 Just like most expectant mothers, as Nathaniel’s due date, May 6, 2012, got closer and closer, I became more and more anxious for him to arrive. To help things along, and because May 5, 2012 was the night of the big, full “super moon,” Greg and I went to eat spicy Mexican food, took a long walk on the lakefront (where he took what I hoped would be the last prenatal pics of me), and went outside when the “super moon” appeared. We wanted it to have every opportunity to have it’s fullest effect.

Well, none of that stuff worked. At least, not right away. I should have been prepared for divine intervention because  just four days later, on the morning of May 9, 2012, the nine year anniversary of my dad’s passing, my water broke. Coincidence? I think not. I wasn’t totally sure at first, but my water had definitely broke, and the most memorable day of my life had begun.

As the days from then to now have passed, specific details of Nathaniel’s birthday become fuzzy, but there are some very memorable quotes from myself and others that day that help it all come back to me.

“Smell this. Does this smell like pee to you?”

It was around 6:30 a.m. on the morning of May 9, 2012, and I had my underwear shoved into my husband’s face asking him if he smelled pee (and he’s still with me today…REAL LOVE!!). I didn’t smell pee, and I thought the fluid was from my water breaking, but I wasn’t 100% sure. I had to ask him to be 100% sure before we packed all the bags into the car, headed to the hospital, and called everyone to tell them we were having a baby. He didn’t smell pee either (thank God!), and the fluid kept trickling down. So, we packed up the car, headed to the hospital, and made our phone calls.

“I want the epidural first.”

It was already noon, and I had only dilated about a centimeter. The nurse in charge highly recommended starting a pitocin drip. I had heard stories of how intense and frequent pitocin can make the contractions, but I also knew that once your water breaks, it is best for the baby to be born within 24 hours. As any strong, brave woman would do, I agreed. However, there would be no pitocin, unless I received the epidural first! This would be the first of several occurrences that didn’t quite coincide with the birth plan.

“May I have some more epidural?”

I was happily numb for most of the day, but then around midnight I started feeling very uncomfortable on one side. It was uncomfortable enough that it was bringing me to tears. I didn’t want to feel what the next level of pain would be, so I kindly asked for more epidural, and the anesthesiologist obliged. I also had the option to press the button that released more epidural, and as time went by and I remained uncomfortable, I continued to press the button as often as I could. Fortunately, this made me extremely numb. Unfortunately, this made me extremely numb. When I tried to do practice pushes, I couldn’t, and I was having some unpleasant side effects from the epidural. I was trembling a lot, and I couldn’t lift any limbs on my own. 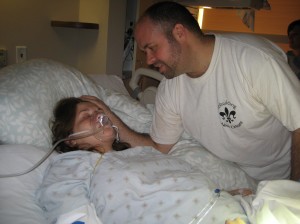 I had gotten a little anxious with all the trembling and numbness, and I fell asleep. The moms had left to go get some sleep, but Greg remained by my side. At around 3:00-4:00 a.m. the next morning, the nurse woke me up to tell me I was fully dilated. I was happy about that, but I woke up feeling pain and delirium. I tried to press the button to release more epidural. Then the nurse relayed the doctor’s orders to tell me not to press the button to release any extra epidural. As the pain increased, I kept begging the nurse to please let me press the button, but the answer was, “no.”  The moms quickly returned.

It would later be explained to me that the epidural was completely turned off because we were in a time crunch with my water breaking almost 24 hours prior, and I was struggling to push because I was very numb. None of this could be explained to me at the time. I was screaming in agony (call to mind any movie with a woman giving birth while screaming at the top of her lungs for the entire hospital, street, region, state, etc… to hear). Yep, that was me. This was definitely not in the birth plan. 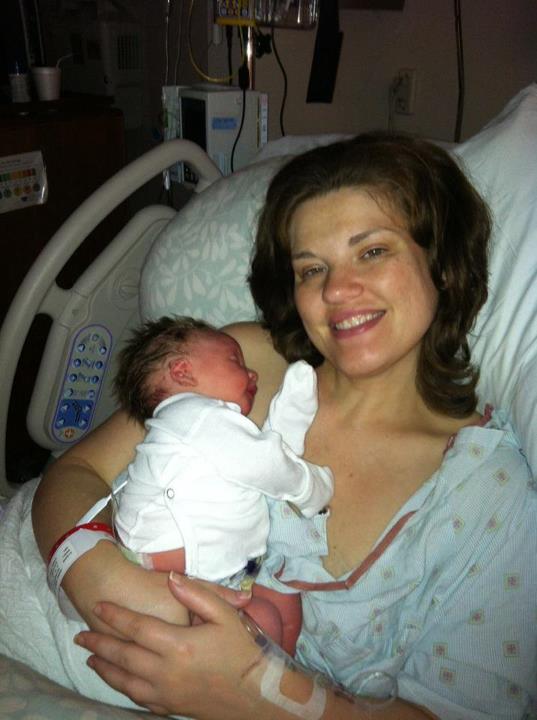 At around 6:00 a.m. on the morning of May 10, 2012, I was running a high fever, and all the epidural had completely worn off. The baby had gotten into position (they could see all the hair and everything), and my body wanted to push. Pushing was the only thing that relieved any of the pain at all. However, my doctor was running late, and I couldn’t push until he arrived. In the middle of my delirium and agony, I said that I didn’t care who delivered the baby. At that point, anyone could. I just needed relief. My mother-in-law saw another doctor in the hallway, and she told him we needed him right away. The nurse couldn’t go get him because she was literally holding the baby in with her hand. This kind, wonderful doctor pushed more epidural for me. It would take time for it to set in. In the meantime, the doctor was telling me to breathe and try not to push. Greg was holding my hand saying, “Sh..sh…shush.” I know they were trying to soothe me, but all I could do was yell, “I’m not pushing!” and “Don’t shush me!”

“One more push, and we’re going to have a baby.”

The doctor arrived 20-30 minutes later, but it seemed like eternity to me. The pain was decreasing, thankfully, with the help of that angelic doctor who gave me more epidural. With my husband by one side, and my mother/mother-in-law taking turns on the other side, I only had to push a few more times, and the baby came out.

Celebrate Your Birth Story! What’s Yours? 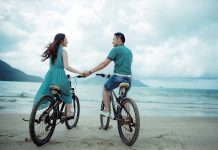 I Gave My Husband a Yes Weekend

Boobies and Bottles and Spoons, Oh My! – My Feeding Journey...