Six years ago today, I was about seven and a half weeks pregnant. My OB’s practice did ultrasounds at that point in all of their patients’ pregnancies to rule out ectopic pregnancy. I had been feeling good up to that point, aside from an aversion to a few foods.

I went into the ultrasound room by myself, while my husband, George, sat in the waiting room. The technician had me lie down, and she turned the screen away so that I wouldn’t be able to see it. I stared at the ceiling, counting the tiles and hoping everything was okay. I just wanted her to tell me if it was bad news, and I tried to prepare myself. When she asked me if I’d been having any morning sickness, I immediately thought the worst. I wasn’t having any, so I knew it had to be bad news. The ultrasound took a long time, and she asked me over and over to hold my breath while she clicked and moved the ultrasound wand. I had no idea what was going on. “Just get it over with,” I thought.

Instead, she called George in and turned on the large monitor on the wall so we could both see. Surely it couldn’t be bad news, right? 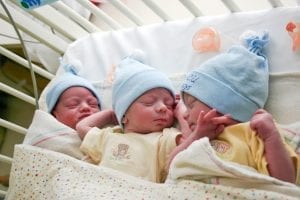 In that moment everything changed. Everything that we’d envisioned for the rest of our lives disappeared and was replaced by a new vision.

But how can you predict what life is like with triplets? I knew no one with triplets. Triplets: that doesn’t really happen, does it? I mean, my husband only wanted one kid. I was hoping to convince him later to have a second. And we get three at once?

Thank goodness for the Internet! I immediately found a few triplet support groups online and found other moms-to-be with similar due dates. I didn’t let myself get too excited, though. We had a few scares, like not knowing if any of the babies were sharing amniotic sacs or not, and I went through a few doctors before I found one I loved and trusted. 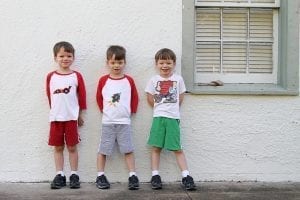 In the end, we made it to a little over 33 weeks, and within a couple of weeks, had three tiny boys installed in a crib in their nursery.

Six years later, are we living the life we envisioned? From the moment my doctor called out “it’s another boy! Three kings!” in the delivery room, I imagined a life of happy chaos. Three little boys leaving a trail of dirt, noise, and destruction in their wake. In some ways, it’s very true. While they’re far gentler and shier than I imagined they’d be, they’re also louder and more fun than I could have imagined. And I never would have guessed three little blond-haired, blue-eyed boys would result from two dark-haired and dark-eyed parents. Their hair is darker now, but their eyes remain as blue as ever. And our hearts are as full as our hands.

*Truthfully, I don’t remember exactly what the ultrasound technician said. But it was something like this. I allow myself some dramatic license here.