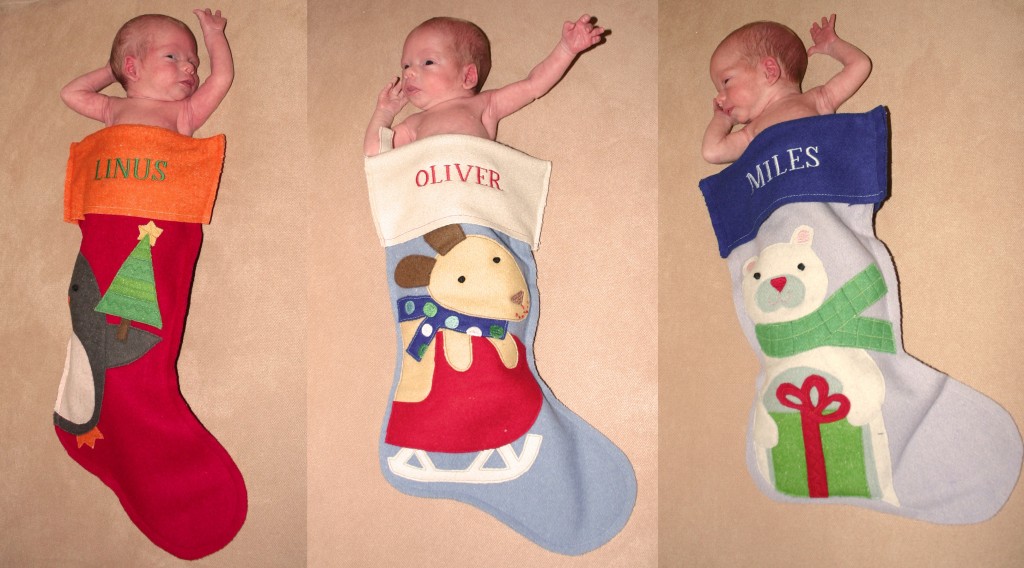 If there’s one thing I love, it’s taking pictures of my kids. Even more than that, I love taking series of pictures. There are the monthly photos (84 and counting) and I’ve done three and a half 365 projects. But no, that’s not all. I also have a Christmas-themed series. (I have a problem.)

The boys came home about a week before Christmas. As soon as they were born and named, my best friend ordered them stockings. And what is the first thing I did when I had all three babies home from the NICU? I promptly put the boys in their stockings and took pictures. (Of course I did!)

The next year, when they were nearly 1, I did it again. I mean, obviously they didn’t fit IN the stockings anymore, but I took a photo of them next to them. And so on and on, for the next several years. It wasn’t always easy. And the pictures almost always looked pretty bad, to be honest. But I love having yet another way to see the growth of my kids, year to year.

But looking through the photos is more than just, “oh, look how they’ve grown!” It’s also the way I can remember those holiday seasons that frankly, I’d rather forget.

Like, look at 2008, when the boys were one. That particular photo was taken on Christmas morning, before I went into the playroom with Miles, and gently stroked his head while he rested on my lap. It was taken before I felt the giant lump on the side of his head, prompting an apologetic call to the pediatrician, which then resulted in a trip to the Emergency Room, where we eventually learned he had a skull fracture.

(That was a fun Christmas!)

Of course, not everyone is going to have preemies come home right before Christmas that just happen to be tiny enough to fit into Christmas stockings. Maybe you’ll take a photo of your child next to the Mr. Bingle that your baby got at his or her first Christmas.

Here are the steps to taking annual holiday photos of your child.

1.  Have a baby (or two or three), preferably due just before the holidays so you can get a really tiny, squishy baby picture.
2.  Decide what you want to use for your yearly photos. Try to choose something timeless, not the Justin Bieber Christmas CD.
3.  Take photo of child next to the chosen object.
* Prop tiny baby next to/in/on top of object. Remember, crying babies are cute too.
* Toddlers must be tied down, generally.
* Older children can be bribed.
4. When the holidays are over, put the object in a safe place. Do not shove it in the side pocket of a long disused diaper bag like I did with our elf that one year.
5. When the next holiday season rolls around, don’t forget to take the picture. If you do forget, just take it in April when you remember. I won’t tell.

What special object would you use in your holiday photos?