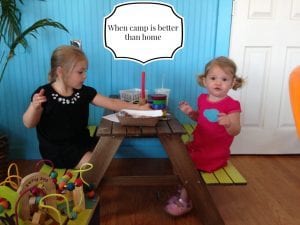 I started a job based in a school this past year. Therefore, this summer was my first one off with both kids at home. In my mind I imagined spontaneous trips to the beach in Mississippi, unstructured play time, walks to get snoballs and lounging at the pool. Well, after about a week home with my kids, I realized my vision was more of a pipe-dream. I was still in my first trimester and feeling awful and exhausted. The kids, when together, fought like cats and dogs and loved to destroy the house. Trips out in public ended up being close to home because I forgot to factor in nap time for the baby. And because my kids are in different places developmentally, finding activities they both could enjoy was a huge challenge.

My youngest child enjoys going to The Parenting Center, but my older daughter has started to outgrow the toys and activities offered there. We tried indoor playgrounds, but my oldest is hesitant to climb on the area designated for her age. The pool ended up being so inconvenient due to the fact that it only opens after 12:00pm, which means we can’t go until after nap. By the time we get out of the house and find a parking spot amid all the Uptown construction, it’s after 3:30pm. The girls eat dinner about 5:00pm so that doesn’t actually give us much time to play. And we even had a few days where we drove to the pool only to find it closed because of thunder, which resulted in tantrums and tears all around. The one activity I found that my kids both enjoy, though, is getting snoballs. So that was always a winning proposition.

After that first week home, we decided that it would be best for everyone if we sent my oldest to camp. She seemed to crave the structure and schedule of planned activities. She missed playing with children her age. And they were able to offer activities such as tumbling and karate that I did not have extra money for which to pay. They also provided water play at least 3 times a week, which was both a blessing and a curse (all the laundry from the wet clothes coming home). But, when I picked her up at 3:00pm every day, she was tired and happy. She would also wake up every morning asking to go to camp. Success!

The other unintended benefit of this arrangement was having time alone with my baby. Running errands with one kid is a piece of cake, especially when it’s the one that isn’t as demanding or vocal! And nap time while her older sister was away was a breeze. I no longer had to sequester the older child so she would be quiet while the baby was napping. And, being pregnant and exhausted, it meant I could nap as well. Score!! Trips to The Parenting Center were easy. I could participate in music class and art because my child was the appropriate age for the activities. Some mornings we would go to the park instead. Chasing one kid around is easier than figuring out how to watch two who want to go in different directions. Logistically, it was just easier to care for one child with one set of needs rather than two. Heaven help me when I have to figure out three!!

And at the end of the day, reunions between the sisters were always sweet. They missed each other during the day enough to not want to immediately start fighting. We could all enjoy snoballs or a trip for beignets without the endless bickering. My sanity was (mostly) in tact at the end of the day. Although this summer didn’t go exactly as I planned, the space camp provided was exactly what we all needed.

I’m Vaccinated, But My Kids Won’t Be

Why Parents of Online Gamers MUST Know About (and Install) Kidas