One year ago this past Wednesday, I had a successful VBAC (vaginal birth after cesarean). Goodness, that stills feels euphoric to say. I wrote about it three days later while the feelings were fresh. To relive my experience makes me extremely emotional. See, I have wanted to be a mother for as long as I can remember. I played with baby dolls until I was entirely too old and wanted to hold strangers’ babies. Yes, I am that person. Even in college, when plenty of friends were not giving a thought to being a mother, it was always at the back of my mind. Maybe it is because my mom is a labor and delivery nurse…or maybe because I have three much younger brothers whose infancy I remember in great detail. Regardless, pregnancy, birth, and motherhood have always been topics I feel drawn to. With my desire to be a mother coupled with my type-A personality, it should come as no surprise that when I found out I was pregnant with my first, I went on information overload. I sought out birth stories, watched deliveries on YouTube, installed the pregnancy tracker app on my phone, signed up for every course Ochsner had to offer, and drafted, edited and redrafted my birth plan.

And then my body had other plans.

My dreams of a natural and med-free delivery came crashing down on me when we realized that my baby was breech and would not be turning in time. This is a subject for a post for another day. Needless to say, I had a C-section for my first. I know some women love their C-sections. I was not one of them. The only positive was a healthy baby, and believe me, I am well aware that is the quintessential positive. If you have a C-section, people will tell you this in hopes that it will make you feel better. If you are like me, it will not. A healthy baby, although the ultimate goal and the best outcome, is not the only outcome. My C-section made me feel broken. Nineteen months later, when I delivered my baby boy vaginally, I was healed. In the hours after I had him, whenever I saw my OB/GYN, she told me I was glowing. That was precisely how I felt.

Are you a candidate for a VBAC?

Chances are the answer to that question is YES. The American College of Obstetricians and Gynecologists (ACOG) have stated that attempting a VBAC “is a safe and appropriate choice for most women who have had a prior cesarean delivery, including for some women who have had two previous cesareans.” The most common question I fielded was regarding uterine rupture. However, the research shows that the risk of uterine rupture is extremely low, between 0.5% and 0.9%. As my doctor was stitching me up during my C-section, she told me she saw nothing indicating I could not go on to have a vaginal birth for subsequent children. I received a low-transverse incision and double suturing. The type of incision is a strong determining factor for many OB/GYNs in deciding to be supportive of a VBAC. If you have a classical incision, do not give up as there are providers out there who will still support a VBAC.

I want a VBAC, now what? 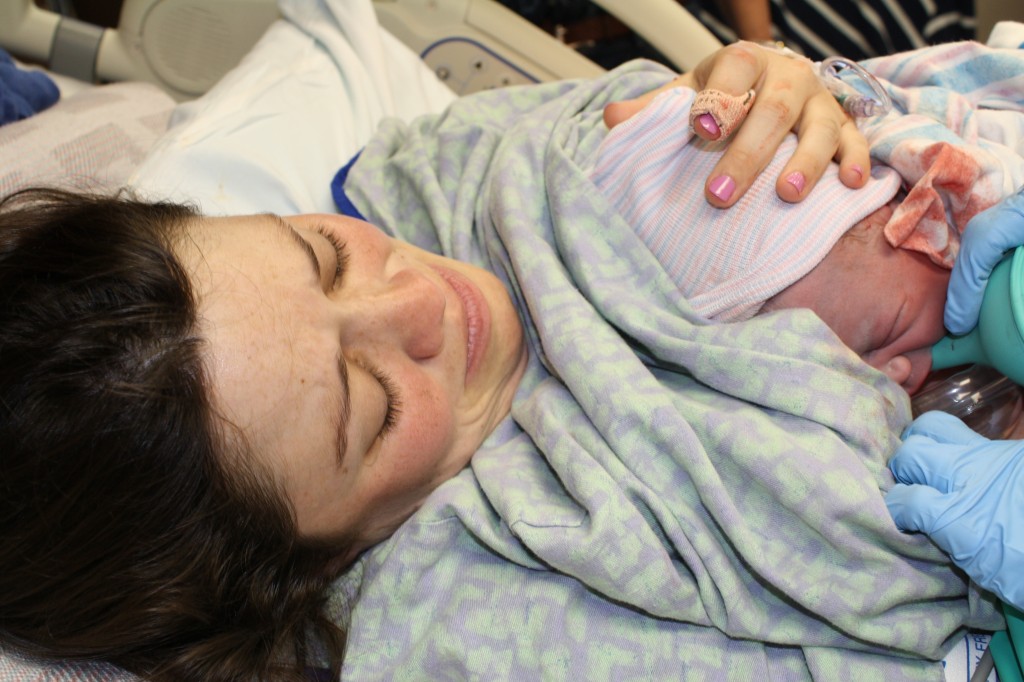 Research, research, research. The first step is finding a practitioner that will assist you in a TOLAC (trial of labor after cesarean) and is actually supportive ::read: doesn’t just give lip service:: . How will you know the difference? If your doctor suggests the following, it’s a good indicator that they are not supportive of VBACS: (1) conversations regarding restricting pregnancy duration; (2) requires ultrasound to determine the size of the baby; (3) induction of labor; (4) restricting time allowed to labor; (5) no doulas allowed; (6) continuous fetal monitoring;  (7) restricting time allowed to push; (8) suggesting an epidural; (9) scheduling a C-section just in case; (10) telling women to come to the hospital as soon as labor starts.

Here is how my doctor responded to the aforementioned: (1) My OB/GYN told me at the beginning that she would be comfortable with me going to 41 weeks. I did not push the conversation because I knew she had been assisting VBACs for her entire career and did not doubt that she meant what she said about being supportive. For another practitioner, this may have been a red flag. When I made it to 39 weeks and 5 days, she said she would let me go to 42 weeks if I came in every day after 41 weeks for external fetal monitoring. I readily agreed. (2) My doctor never suggested this as an option. After all, they are routinely inaccurate. (3) My OB actually told me that induction is contraindicated for VBACS. Yes, she is awesome and knows her stuff. (4) I went into labor on Sunday evening and reported to her office for a checkup Monday morning (39 weeks, 5 days). She told me to go home and relax as much as possible. I did not have my baby until 2pm on Tuesday and at no point did she ask if I wanted a C-section or did I feel like she was watching the clock. (5) I had a doula, and I strongly recommend one. So did my doctor. (6) I did have continuous fetal monitoring. I was ok with that. I believe this may be a hospital decision and out of the hands of my doctor. (7) I pushed for over two hours, so no warning signs there. (8) I elected an epidural long before my doctor arrived at the hospital. She did recommend Lamaze classes and utilizing the techniques because I should not get the epidural too quickly. (9) NEVER. Thank God. (10) My OB told me the opposite. She told me to labor at home as long as possible, and then labor some more. There is so much more information that I cannot possibly touch on all of it in one post. I encourage you to reach out to your local ICAN (International Cesarean Awareness Network) group. Check out The VBAC Link podcast for even more information. There is a Baton Rouge chapter on Facebook that provided me with invaluable information during my journey. They even led me to my amazing doula, Maggie Schneider, at Saving Grace Birth Services. I also encourage you to find a truly supportive practitioner. I delivered at Ochsner who does not have the best track record for VBACs. However, I had a wonderful experience and would advise you not to rule them out. Drs. Dickerson and Buchert in Baton Rouge and the midwives at Ochsner in Baton Rouge have proven to be supportive. Dr. Lapeyrolerie at Touro has a reputation as being supportive as well. I dream of a day wherein evidence based medicine is practiced and VBACs are the norm.

Once I felt 100% confident that my doctor was going to support me in attempting my VBAC, I knew I wanted to give birth in a hospital where staff was available to provide an emergency cesarean should I have a uterine rupture. I knew there was a risk, albeit slight, and because I am not a particularly risky person, being in a hospital with an operating room was the balance for me. To me, the benefits of allowing my body to try to deliver my baby naturally outweighed the risk of the C-section. As I said before, the risk of uterine rupture is very slight. I had a healthy, uncomplicated pregnancy, and my baby was monitored throughout my entire labor. I was actually told on numerous occasions that he was doing “beautifully.” On the other hand, a C-section is major abdominal surgery, and according to the experts, VBAC “lowers a woman’s  risk of hemorrhage and infection, shortens postpartum recovery. It may also help women avoid the possible future risks of having multiple cesareans such as hysterectomy, bowel and bladder injury, transfusion, infection, and abnormal placenta conditions (placenta previa and placenta accreta).” For me, VBAC was the only option, and I did not waver in that choice. Not even when my epidural failed and I had been in active labor for over 20 hours. It was brutal, but it was beautiful. Giving birth vaginally healed me in a way that words cannot adequately express. The euphoria I experienced in the hours thereafter is indescribable. And the beauty of remembering my post-partum days, well, that is worth it tenfold.

Have you had a successful vaginal birth after cesarean? What emotions did you experience before, during and after?

A Letter to My Twenty Year Old Self