As I pause for a couple of minutes to jot some notes, I see my son, also known as the youngest daredevil in the world, out of the corner of my eye. He is slipping under and over the bottom rails of our bar stools with as much ease as a gymnast that I cannot help but giggle as he continues to suck his pacifier without missing a beat. Knowing he has my full attention now, he flashes me the biggest smile while biting down on his “noonie.” By his first birthday, he has performed more stunts than his sister attempted or probably even imagined in her two plus years on this planet. He is the reason why seat belts exist in high chairs and warning labels come on toys. He is a boy.

Raised in a household of girls, my interaction with boys was minimal growing up. We were surrounded by Barbie dolls, girly dresses and kitchen play sets. I never recall any one of us leaping from sofas or wrestling with one another. My husband, the oldest of all boys, recalls tackling his younger brothers, playing in the dirt and staying out until dark riding bikes. “This is only the beginning,” I am told by many. The beginning of what? Trips to the emergency room, pretending to be Saints’ linebackers, calls from the school nurse, hanging from the oak trees at City Park, chipped teeth and broken bones? I cringe at the sight of blood. And, you say his love for action, fearless determination and horseplay will only escalate as he reaches toddlerhood? My sweet boy – do not let his size fool you – has so much energy and willpower that I wonder if I will survive my child’s childhood. 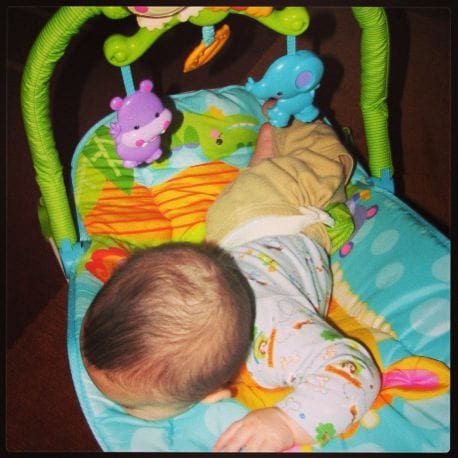 I had no idea that at the tender age of four months my youngest would already denounce his bouncer and threaten to jump. The look in his eyes revealed no fear, only excitement, for the unknown. He has also attempted to escape several times the safety of the carrier, while strapped to me of course, trying to wiggle himself out and thrashing his limbs across me. Changing his diaper becomes challenging with each day, but I am told, “This is normal.” An innocent game of Peek-a-Boo sometimes includes hiding in kitchen cabinets, crawling under his crib and hanging behind floor length curtains. Apparently, these are all ordinary actions of a boy, or says my husband and fellow girlfriends. Just the other day we had a play date with a family with three young boys and a grape flavored snowball was for contention. It became a messy situation and the snowball ended losing in the end. I would imagine that mothers of boys would have a large supply of stain remover on hand.

In the meantime, I have learned to hide away fragile items, minimize his time in the high chair and prepare myself mentally for the mini heartaches that I am sure will become the daily norm in the near future. Despite his adventurous nature, he does clings to me for nurturing love, and he is my adorable stalker. Our relationship, as mother and son, is unique, much like between fathers and daughters. These are among some of the differences I have already noted during his first year of life that were distant to me having initially raised a girl.

What advice would you give a mother rearing her first son?

Why I Do Not Use a Reward Chart With My Children

Reflections on the Past: Our Family’s Heirloom