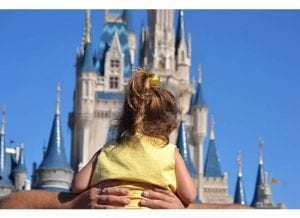 Last week we set off on a family adventure to the most magical place on earth: Disney World! I have been to Disney a dozen times and while it was always fun, it was never as magical as seeing it through my daughter’s eyes.

We knew it would either be a success in that Annelise loved the experience or it would be a nightmare filled with long days and scary characters. It was a gamble, but I am relieved to say that it was smooth sailing. We could not have asked her to behave any better than she did.

We flew to Disney World on Southwest both because I was not brave enough nor have enough patience to make the drive with a two year-old. It was her first flight, and it went well. I recommend bringing the stroller through the airport and catching Disney’s Magical Express when you get there so you don’t need a car seat.

We were there for five days and four nights, which was plenty of time to allow us to spend a day at each park and go back to our favorite park for the last day. With a two year-old we spent the majority of our time at Magic Kingdom, which is no surprise. 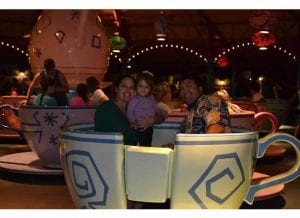 Because toddlers tend to rise early, we would go to the park when it opened, spend the morning riding rides and then head back to the hotel for lunch and naptime. We stayed at Disney’s Polynesian Resort so getting back to the hotel was just a quick monorail trip back. We would let Annelise take a long nap which was key to keeping her on schedule and happy. After her nap we would go back to the park and stay late.

This is the secret. Not only are you skipping the busiest part of the day – the afternoon – but also the hottest. There is nothing worse than a hot, tired toddler waiting in a long line. So we skipped that. After 5:00PM the parks just magically emptied out, the temperatures cooled off and the lines were dramatically shorter. This was the way to experience Disney! 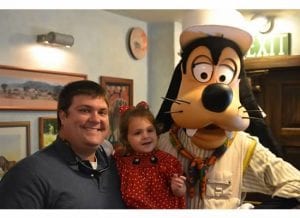 We did only two scheduled meals with one being the character breakfast and the other the Hoop-Dee-Do Review. There is no doubt that she liked the character breakfast but I was very surprised in how much she enjoyed the Hoop-Dee-Do. She danced and clapped along with the show. Full disclosure that my daughter is a Cinderella junkie; she absolutely loves the movie. So much so that hubby and I have to cut her off because we just can’t take it any more. So we could not wait for the moment when she would see Cinderella’s castle and get to meet her idol.

If you want to meet the princesses, when you enter Magic Kingdom, the Town Square Theatre is on your right. In there is where the princesses are available for pictures and meet and greets. As soon as we entered Magic Kingdom when it opened we went straight for this. The wait was about 20 minutes, which was better than the 90-minute plus wait that it typically has. But the wait was worth it. They only let a handful of people in the room with the princesses at a time. This allows a more personal experience with the characters. 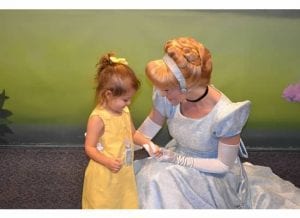 If you want to see the classic Disney characters there is a separate line for them here as well but I recommend seeing them at the meet and greet in Epcot. They are all in one spot with a similar set up but since fewer people are in Epcot the line was about 15 minutes around 5:00PM, which is not bad.

We had some kind of weird luck in that every time we walked into a park we just happened to catch a parade or a show, which was great. I would definitely recommend seeing these, as our two year-old loved them.

I would say that your child is never too young to go to Disney after this experience. The magic is there for any age. She may not remember this later on but our family had a blast and we created memories that I know I will never forget.

Here are a few tips for going to Disney World:

There is so much to share – check out my personal blog for more on our trip including details on hotels, parks, the new Fantasyland expansion and Mickey’s Not So Scary Halloween Party!

Have you been to Disney? What tips would you add?

Is a Disney Cruise Worth the Hype?

Quick and Cute Valentine Ideas For Under $20