I had pictured my doctor saying that throughout the duration of my pregnancy. While we did not find out the gender of our baby, I had this feeling all along that it was a boy. Perhaps, it was that every person who saw me said I was carrying like someone expecting a son, or maybe it was the fact that it was just too convenient to have a daughter born in the same month as her sister and who could wear the ample amount of clothing that we had accumulated during the last three years of Jane’s existence. But I just knew we were having a boy.

With that said, the only moment I had pictured that at all captured this feeling was my doctor stating that familiar refrain, “It’s a …” In every other regard, I imagined our life as a family of four as one where Jane had a sister. They would play house together, stay up late sharing secrets, fight over shoes (hopefully not boys), and stand in each other’s weddings.

When my premonition was realized as Charles entered our family, I found myself uncertain of what it was like to have a brother. I suppose it is because I have a sister that I am very close to that this was the sibling relationship I imagined for Jane. It was in the context of my personal experience that I envisioned the future. 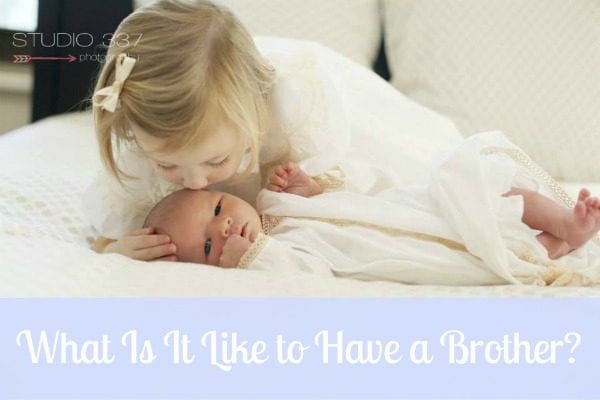 Charles has been in our lives for five weeks now. In every way, I cannot remember a world without him in it. His sweet, calm, laid back demeanor is the perfect compliment to his sister’s fiery, independent, spirited manner. When I see just how loving and gentle she is with him, I am filled with joy. She loves him more than I could have ever imagined a three year old able to love someone.

Yet, I still wonder how their relationship as siblings will grow. Will they be close? Will they be friends? If they do not go to school together, who will protect them or stand up for them when they need an ally? Do brothers and sisters call each other when they need advice? Or even just to chat about what is going on in their lives? Will they share their hopes, dreams, fears, and secrets with one another?

What I hope is that the answers to these questions are founded in how we raise them, regardless of their gender. I hope that they will be close because we raise them to believe that, above all else in life, family is most important. I hope we raise them to be the best of friends because we instill in them that a sibling is the single greatest gift one can receive. I hope that they lean each other and show their love for one another through words, acts, and deeds because they grow up in a family where affection is heard, seen, and felt.

What is your brother/sister relationship like? Or that of your son and daughter?

Working Mom Diaries: Am I an Absent Mother?

How to Build an Art Cart at Home Your Child Will...