Before I got pregnant with the boys, I’d never seen a set of triplets before. Maybe on TV or in the movies, but never in real life. But as soon as we announced our big news, people were coming out of the woodwork, telling me about their friend or cousin or friend’s cousin who had triplets. How great is it that New Orleans is such a small town? Within weeks, I was in contact with my 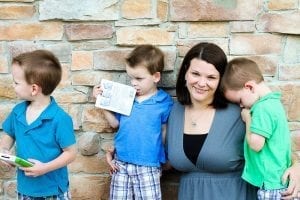 cousin’s coworker and his wife, who had two year old triplets.

A couple of months later, we met a man with an infant trio. And another time, I ran into a set of triplets at Superior Grill and befriended the family (whether they liked it or not.) I’m still friendly with all of these families, and many more. I kept meeting more families of multiples. On the day the boys were born, the woman in the room next door gave birth to quadruplet girls. Two days later, another mom had a set of triplets. Not only did we make national news, but I am, to this day, very good friends with those moms. Sometimes I wonder, if I lived in another city, would I be so lucky to have befriended these families?

We have a triplet group here in New Orleans. The first meeting I attended was when the boys were three months old. I couldn’t believe how many women were there. They all had triplets or more. Who would have thought New Orleans had so many sets? At 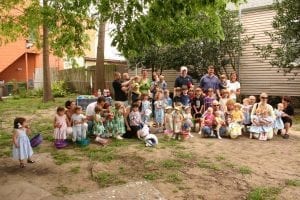 our annual Easter Egg Hunt, we have at least twenty families represented. (That’s a lot of kids and a lot of eggs to hide.) When my coworker’s wife got pregnant with identical twin boys (don’t drink the water in our office), I felt bad that she didn’t have the same support network I had with my triplet moms, so I started up a Facebook page for parents of all multiples in New Orleans. It’s nice to see connections being made in this group, too. If I thought we had a lot of triplets here, it’s nothing compared to the number of twins! But having a strong community of other moms of multiples isn’t the only benefit to living in New Orleans. Too often, from parents elsewhere, I hear horror stories of rude comments made. “Better you than me,” “I feel sorry for you,” or “That’s my worst nightmare.”

But the worst comment I get here is, “Bless your heart,” which I can live with.

How many New Orleans Moms Blog readers have multiples? We’d love to meet you!

Pam Kocke works in IT for a local non-profit organization, and is the mom of identical triplet boys Linus, Oliver, and Miles. She started blogging ten years ago while training for a marathon, and over the years has written about weight loss, wedding planning, pregnancy, and raising triplets. If she’s not photographing her boys, it’s only because they’re asleep and she’s enjoying the peace and quiet, most likely with a glass of wine. Pam was born in New Orleans, raised in Baton Rouge, and a resident of Algiers Point.

Get Up. Get Dressed. Get. Things. Done.