I had a normal, healthy pregnancy with my first child.

No high blood pressure, gestational diabetes, or swelling. My weight gain was within the normal range (although I probably should have gained far less considering how poorly I ate). But all-in-all, it was an uncomplicated pregnancy. Baby measured appropriately at every appointment and hit all developmental markers at his anatomy scan. 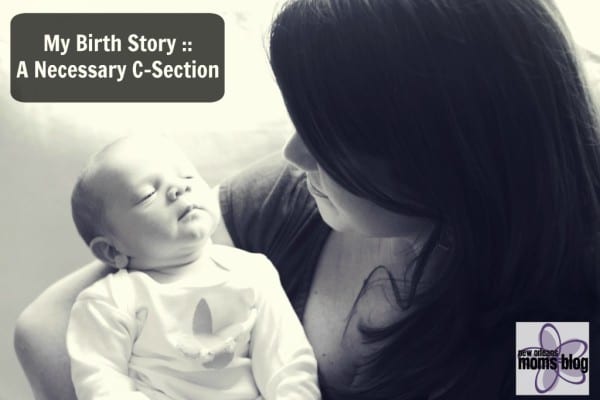 So I busied myself with breastfeeding classes, childbirth classes and even did 4 weeks of Lamaze training classes. I read, and re-read, anything about natural birth and childbirth in general. My goal was not to have a completely un-medicated birth, but rather to be able to labor for some period of time before getting an epidural. Sure, I was scared of the unknown and the pain, but I felt in control and I had a plan.

To complicate things slightly, Mark was in a breech position. Because my doctor does not perform routine ultrasounds, and she assured me that he still had time to flip, it wasn’t necessary to determine in which breech position he lied. But by 38 weeks, when he had not flipped to a normal presentation and it was determined that he was in a Frank Breech position, my doctor again presented me with options. I had already done my research when she told me that the External Cephalic Version procedure was an option if the specialist would agree to take my case. I remember the feeling that the birth I dreamed of was slipping through my fingers. You can imagine my excitement when the specialist agreed to attempt the procedure. I am not saying this procedure is for everyone, but for me, I was willing to take the risk. Again, I was fearful of the pain (the procedure supposedly hurts), but I also felt in control and had a plan. Notice a theme? Well, you know what they say about the best laid plans …

It all came crashing down when they did the pre-procedure ultrasound.

My amniotic fluid levels were dangerously low, so low that my doctor contemplated doing a C-section right then. The specialist explained to me that the low fluid made the procedure too risky. I remember sobbing; sobbing because I was scared for my baby, for myself, and if I am being honest, in mourning of the birth I dreamed of. Because yes, I dreamed of my birth. My mom, a former labor and delivery nurse, always shared birth stories with us. I have always been fascinated by what a woman’s body can do and after feeling life grow inside me, I felt even more connected to that journey.

I recall my doctor telling me that I needed to go home to drink a gallon of water, rest and come back the following day to have my levels rechecked. I followed her orders, and the next day my amniotic fluid was back at a normal level. I will never know what could have happened if I had drunk a gallon the day prior to the procedure. Would the doctor have been able to flip my baby into a normal presentation? Would I have been able to deliver him vaginally? Alternatively, was this a sign that something could have been complicated during the delivery? I’ll never know. I will have to trust that it all happened for a reason and that reason was so that I could have a healthy baby boy.

Because I was only 38 weeks, and my fluid levels had returned to normal, my doctor waited a week to schedule the C-Section, provided I agreed to daily Fetal monitoring.

Of course, I obliged. Was I uncomfortable? Yes. But I knew he needed more time in utero. That time was also good for me to come to grips with not being able to labor and deliver my baby. That week was rough. My mom later told me that I sounded depressed during that time. I think I was. I was trying to remind myself that this was necessary, because I truly believed that it was, but then the guilt swiftly followed because I would question why I felt so sad about the whole thing. It was a vicious cycle. I needed to give myself grace. I needed to shut out all the judgment of people who don’t understand mourning a birth experience. That week crept by in some ways, and flew by in others.

But nevertheless, on the day of my 39th week, I showed up to the hospital at 4:00am to begin the pre-op procedures and protocols. I will say that for me, the entire experience was awful. The staunch odor of bleach and sickness that is a hospital, the white walls, the needle pricks, the coldness of it all. I am not clueless enough to know that many of those things would have been present for a natural childbirth experience, but to me, the whole thing made me cringe. Then came the time where they were ready to bring me into the operating room. I was given the option to walk myself in or be wheeled in. I felt like I needed to be in control (again with the control) so I elected to walk myself in there, open-backed gown and all. I waddled in, one hand on the IV cart and one holding my gown closed in the back. All the while I fought back tears.

The worst part? I had to go in there alone. No one could accompany into the OR for my epidural in order to “protect the sterile field.” Again, I am a rule-follower so I understand the need, but when I already felt so alone and so scared, this was a low blow. I climbed my short self onto the table ready for the epidural; which I had been assured by women before me that the pains of labor were so intense that the epidural did not hurt. Well, my friends, I had no labor. I never knew what a contraction felt like. So the epidural was pretty painful to me. Not the epidural itself, but the numbing injections. Because you see, they could not place the epidural … several residents tried and failed, and the chief resident was ultimately called in because of the difficulty. I was asked whether I was a runner because my bones were so close together. No, I was not, just another revelation about my body. It took over an hour to place my epidural, I fought back tears the whole way.

Once the epidural was in, my husband was allowed to join me.

I could tell by the look in his eyes that he did not like seeing me like this. But he was my rock, holding my hand and updating me the whole time. The 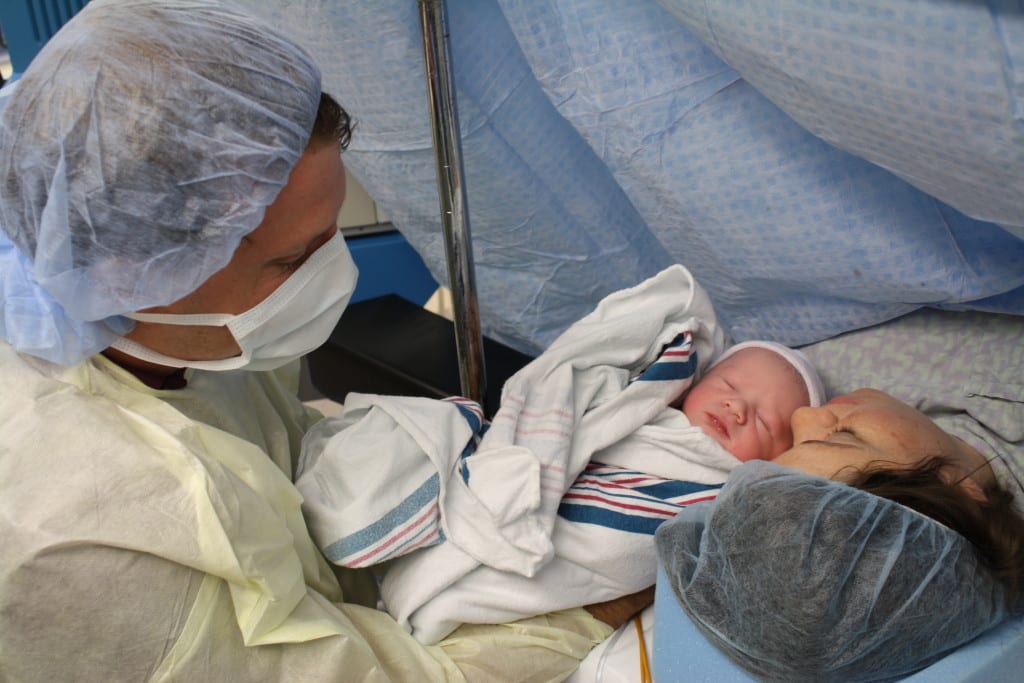 experience for me did not ever get better. I shook the whole time from the anesthesia. And although I was numb, I felt all of the tugging which made me nauseous, making my blood pressure go crazy and they had to give me medication to counteract it. There is a silver lining :: hearing your baby’s cry for the first time followed by your doctor saying “he is perfect,” and he was. He was perfection. They wrapped him up and brought him over to me right away. I will never forget the moment I laid eyes on my perfect baby boy.

Then it was time to take him to the nursery for his checkup.

What I did not know was how quickly it would be to get him out of me, but how much time it would take to put me back together. Not wanting him to be alone, I made my husband go with him to the nursery. This meant I was alone in the OR with the nurses and physicians. The doctors were chit-chatting and I was just trying not to convulse or throw up. Again, I felt so alone.

Once it was over, I was wheeled into a recovery room and ready for my baby to breastfeed. I have to give much love to my doctor who called the nursery herself and told them to bring my baby to me to nurse. They did, but I quickly discovered I didn’t know what to do. I was afraid of laying him on my incision, and I felt so groggy from all the medication. The lactation consultant stepped in and held my baby and my breast and got him latched. Without her help, I don’t know what our breastfeeding journey would have looked like.

I had a patient controlled pump of pain medication for the first 24 hours, and I pushed that button routinely. Not because I felt pain, but because I was scared of feeling it. I got up on day two when my husband encouraged me to walk down the hall. Well I tried … but I turned white as a ghost, my BP plummeted and had to have more labs drawn to make sure I wasn’t hemorrhaging. I was discharged 48 hours after my C-section. I could not sleep lying down, I couldn’t pick up my baby, and I did not walk upright for 2 weeks for fear of ripping my incision open. My recovery was long and I was breastfeeding. Not only was I adjusting to being a new mom, I was recovering from major abdominal surgery. I believe I also had some sort of depression over my birth experience.

Reflections on my necessary C-section

I came out of it ok, I would say it took about six weeks to recover from the experience. My incision, although small and “beautifully healed” by medical standards, still feels strange to the touch. The difference is I am proud of it today. It was necessary to deliver my healthy son into my arms. I have to admit that I never had true pain because I routinely took pain meds. I wish I wouldn’t have, because not only do I not react well to them, it left me in a fog. If I had to do it again, I would try to rely less on pain medication. I also have to take a moment to say that nearly every doctor, nurse, and lactation consultant was exceptional in their care and treatment of me. I felt like I was in the best hands through every step of the process. It was the process that I hated, the process that I did not want. It has now been over 4 years since this birth experience and I think I am at peace. But I believe I had to let myself grieve in order to be at peace. If you had a birth experience that was traumatic, allow yourself some grace and shut out the judgment of others. Of course, a healthy mom and baby are the ultimate goal but they are not the only goal and the concepts are not mutually exclusive. I had a healing birth with my second child, but I know if I have another C-section in the future, I will give myself grace to feel what I do.

A Letter to My Twenty Year Old Self