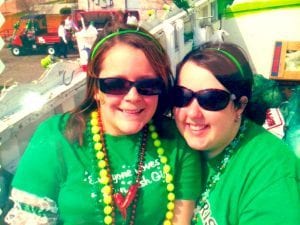 When I was in my late teens and early twenties, Mardi Gras was all fun and games: Popeyes, frozen daiquiris (alcoholic only after I turned 21, of course, in case my own mom is reading this) and camping out on the neutral ground. We would arrive super early in the morning for Endymion with nothing on the agenda except for wasting the hours away, hanging out with friends and enjoying the people-watching. The Mardi Gras festivities were a blast in my more carefree days, but now that I have kids…eh, let’s just say the shine of the doubloons have lost some of its luster for me.

It’s Not so Fun Anymore 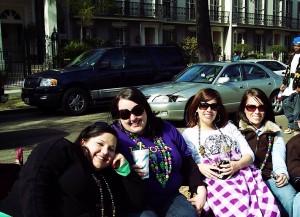 Now, don’t get me wrong, I’m not a Mardi Gras scrooge. I love all that Mardi Gras brings to our great city and, if you can navigate the crowds of St. Charles Avenue with a stroller, more power to you. But, for where I am at right now with my kids being 5 and 2, Mardi Gras is less “Throw me something, Mister!” and more, “Mom! When’s the parade getting here? Mom! I have to pee! Mom! That stuffed animal was meant for ME! Mom! I have to pee again! Mom! Mom! Mom!” And I’d feel bad laying down my child down next to a king cake and left over Popeyes bones to change his diaper. Add that to my constant Mom-brain soundtrack reeling through all the germs in a port-a-potty, the possibility of two mini-people in huge crowds, did I bring enough diapers and wipes, do we have enough snacks…it’s a headache begging to happen. 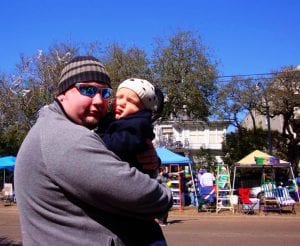 And did I mention the sometimes hours in between floats? When a parade is rolling and throws are flowing left and right, the fun is great…but, heaven forbid there is a breakdown (and let’s be honest, there is always a breakdown!), trying to keep the kids entertained for 30 minutes to an hour can be overwhelming. I am not one of the Wiggles. Plus, my two little ones are constantly trying to Mardi Gras mambo to the other side of the neutral ground into oncoming traffic. Back in the good old days, these long pauses were no big deal as long as I had a drink in my hand. However, a handful of goldfish crackers and a dirty diaper don’t exactly have the same appeal.

Even more predictable than a float breakdown is a kid meltdown. Before, during or after the parade if you have to get out in a hurry…not so fast. Even in my Mardi Gras glory days, the traffic was the worst part. Now add in two crying, tired kids and the misery goes higher than all the ladders lining the parade route!

Getting Out of Town 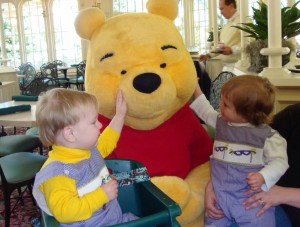 For these reasons and for the stage that my family is at right now, Mardi Gras is an ideal time for us to second line out of NOLA and into a little vacay. We utilize the time off of school and work for a family vacation that doesn’t involve a 5-year-old screaming crying after the “mean man” on the float didn’t throw him the four-foot-stuffed gigantic monkey. This year, we are headed to the beach, but in the past we have done Disney World and saw an amazing amount of purple, green and gold shirts from like-minded New Orleanians walking around the Magic Kingdom.

I’m sure once my boys are older and strollers and diaper changes aren’t necessary, I’ll be back on the neutral ground with our Popeyes, antibacterial soap for the port-a-potty and a football to throw to keep my boys entertained in between the floats. But, for right now, we take these few days to break from the Mardi Gras madness and do what New Orleanians are best at: being a New Orleanian wherever you are.

Are you less of a Mardi Gras fan since you’ve had kids? Do you go out of town?

5 Best Places to Buy Matching Holiday Pajamas for Your Family

Momma, Are You Thriving or Surviving During Quarantine?