When my daughter was born, my world was turned completely upside down. It’s a cliche, but like most cliches, it’s a cliche because it’s true. My priorities shifted, my interests changed, my attention was singularly focused on her. Everything was different. 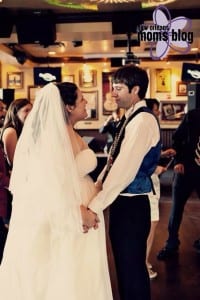 I’m a nurturer by nature. I mean, I’ve been known to capture spiders to free in the backyard and stop my car to carry my elderly neighbor’s groceries in for her. For years, all of that nurturing and attention was dedicated to my husband. And then, Ruby entered the world and all of that nurturing and attention immediately shifted to her. I was one-track-minded, anticipating her needs, monitoring her schedule, learning her cries, struggling to breastfeed. It was all Ruby, all the time.

As the primary caregiver and a stay-at-home-mom, she had literally changed every aspect of my life, from my sleep patterns to my personal hygiene to my sudden interest in baby bowel movement schedules. But for my husband, not so much had changed. He still got up every morning and did the same thing he’d been doing for years. He still woke up at the crack of dawn to start his day with a long commute. He still came home exhausted from a busy day at work, followed by another long commute. Except now, when he got home, the house was not clean, dinner wasn’t cooking, and I just wanted him to take the baby for 5 minutes, so that I could get a shower or pee alone.

We didn’t fight, but we weren’t “us.” We didn’t spend time sitting at the dinner table talking about our respective work days and current events or laying in bed watching movies until 2 am or sitting on the patio drinking our morning coffee together. We were in survival mode: keep the baby alive, meet our basic needs, avoid killing each other, wake up the next morning.

My husband just didn’t seem as connected to the baby as I was.

He didn’t jump at the first sound of her cry, rush to make a bottle as quickly as humanly possible, or delight in the gas-induced “smiles” that I lived for. It was frustrating and it made me anxiously wonder if we had made a mistake. Was he not ready for this? I was afraid to find out. But reluctantly, I sat him down and talked it out. 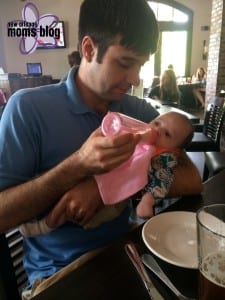 That’s when I realized, for nine months, I’d been carrying her inside of me, getting to know her (and her bony heels!), feeling her move, hearing her heartbeat, and getting glimpses into her personality. She was something tangible, real. I knew her as well as I knew myself. For nine months, I had given up soft cheeses and martinis, slept on my side with eight strategically placed pillows, taken lukewarm baths, worn stretch panel pants, gone to countless doctor appointments, taken progesterone, been on bed rest, had to leave my job earlier than planned, and kept a mental log of every acceptable public restroom within a 20 mile radius of me.

My husband, on the other hand, only had passive experiences, feeling the occasional kick, attending the ultrasounds, seeing my belly grow, building the crib, rubbing my aching body, and hearing me groan as I tried to get comfortable in bed every night. But the tangible reality of her and all the changes she would bring? Well, I had a nine month head start on him.

He wasn’t disconnected. He was just learning how to be a dad and was terrified. From his perspective, it was coming naturally to me. I always knew what she wanted, when she wanted it, and how to give it to her. My survival mode was pushing him out of the way because I could change a diaper faster or bathe her more thoroughly. 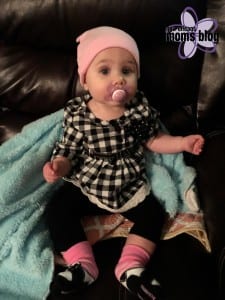 And I had forgotten that I was also a wife.

I hadn’t made myself available to discuss his worry over our finances or celebrate his promotion. I had been so frustrated with his learning curve that I’d forgotten to show gratitude for the times he got up at 3am and let me sleep. I hadn’t lined up a babysitter so that we could have a date night. I hadn’t even opened up to him about how hard motherhood was and how scared I was too.

So, I learned how to let go. I let him make the world’s slowest bottle, put her diaper on backwards, and dress her in absurdly mismatched outfits. I let him figure it out, instead of taking over. And with all that time that I’d spent steamrolling him, I took care of my needs, so that when we were both done, we had time to figure out the new “us.” It wasn’t as leisurely and pretty, but it was respectful and beautiful in its own way.