I’m about to host my boys’ tenth birthday party. I’m big on birthday parties, so they’ve had one every year, but it’s funny to look back through the years and observe how they’ve changed. Maybe you can learn something from my vast experience.

The First – We Survived a Year of Triplets! 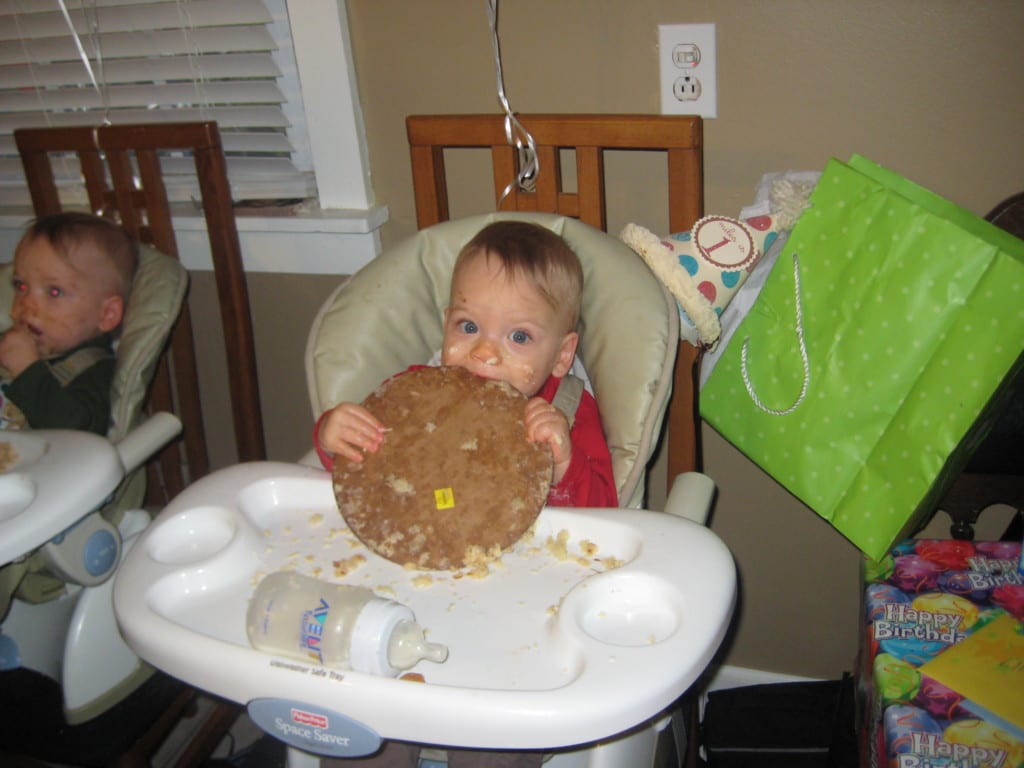 God knows how I did it, but I planned a somewhat elaborate party. I mean, relatively speaking. It was circus-themed (Three rings, get it? triplets?) and I ordered these adorable hats for the boys and made themed foods and hand stitched a felt banner (which we still hang every year) and baked the cakes myself and … I have barely any photos. I do have some of the boys enjoying (to various degrees) their sad, homemade cakes (for I am no cake decorator) but no photos of us as a family, and hardly any of the decor.

The Second – This Time, I’m Outsourcing

After all the work (and mess) that went into hosting the boys’ first birthday party, I decided it was time to let someone else do most of the work. But we needed to invite a lot of people (let’s face it, two year olds don’t have a ton of friends, but the ones they did have generally came in groups of three and four, thanks to my local multiples group.) So off to the Children’s Museum we went! That was a pretty great party, except for the part where Linus stuck his finger in the candle.

Lesson 2: Let someone else do all the work. 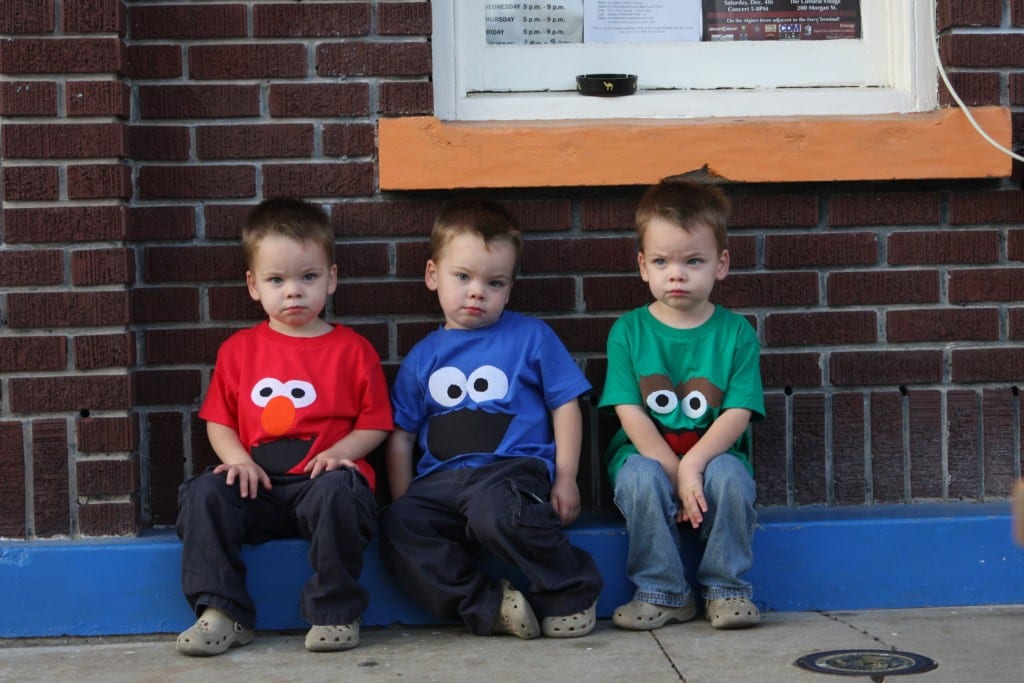 The Third – Three Oscar the Grouches

Our friends opened a pizza place right in our neighborhood, and it was across the street from a fantastic park. So the third birthday party was Sesame Street themed. The big mistake? Starting it right after nap time, which made for grumpy birthday boys. Live and learn. At least they went with the theme, I suppose.

Fortunately, my best friend came in from Virginia to help make cake pops and cupcakes with our favorite character’s faces. Have you ever seen the Elmo in Times Square? You know how he’s just off enough to look creepy? Those were our cake pops. And the day before, I threw my back out, so I was in agony the whole time. Nevertheless, it was a pretty fun party.

The Fourth – Another Party at the Park 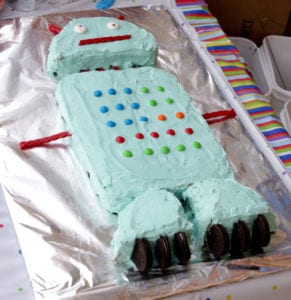 Hooray! The weather held! The boys had just started preschool, so this year we got to invite school friends! The theme was robots, which meant the cake was a lot easier to execute (helllloooo, sheet cake!) I love looking through the pictures of all the kids that they still go to school with. They were so tiny then!

The Fifth – Inviting ALL the Kids

The boys were in separate classes this year, and I couldn’t figure out who to invite, so heck, we just invited ALL OF THEM. That would be 75 kids plus parents, plus our neighborhood friends. And I decided each kid needed his own theme. This was the beginning of the end. It just about broke me in every way. Think about it – even if you’re serving cheap food, it adds up when you are expecting that many guests. A zillion hot dogs later, the party was over, and it was a hit. But I decided next year, it’d be smaller. And we’d gotten lucky with the weather for three years, so I knew it’d be our last park party. Let’s not tempt fate again!

Lesson 5: Hire a teenager with a nice camera to take pictures. (See Lesson 1.) 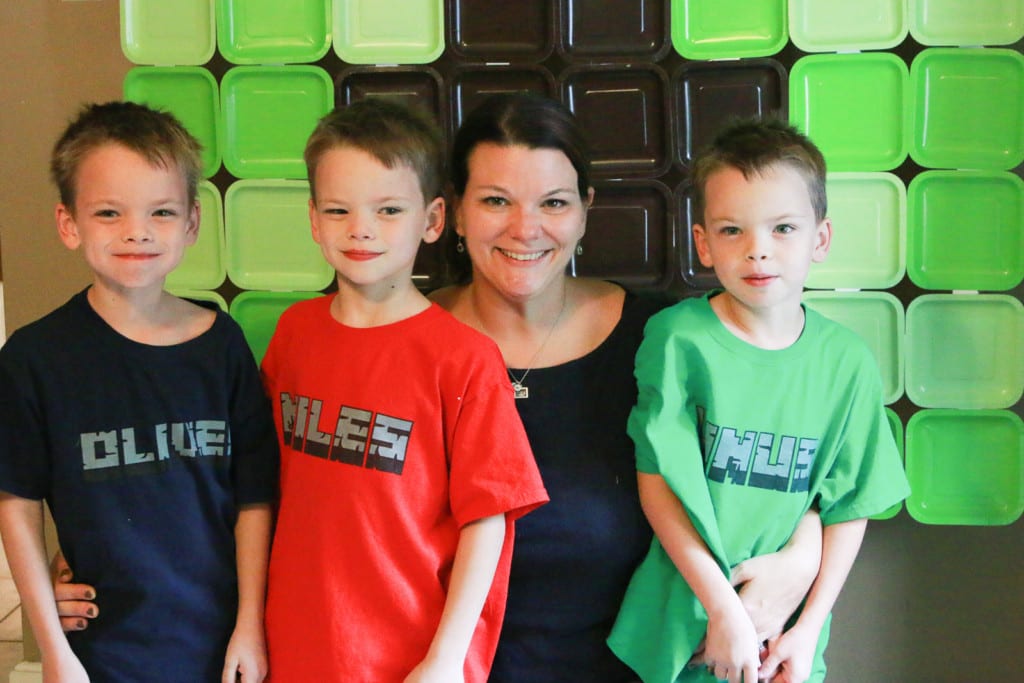 We had Lego and Minecraft parties this time. (Note for a Lego themed party – get those candy blocks! They’re yummy. On second thought, maybe not. Your dentist will thank you.) I rented a bounce house and a popcorn maker, got some pinatas, and let the kids run rampant while the parents sipped wine downstairs. These were fun and chaotic, and a big mess. I had a great time decorating for these parties – so many ideas on Pinterest, it’s hard to pick just a few. Plus, my friend Angela is a very talented baker, and she made the most amazing Minecraft cake for that party. As it turns out, I was right on about the weather – it was cold and gloomy for both years.

Lessons 6 and 7: Don’t overthink it, kids will have fun no matter what. And bounce houses will fit in small yards.

Eighth – Back to Outsourcing

The boys were obsessed with soccer, so I decided to run with it and have the party at an indoor sports center. The boys had a blast. I thought it was a disaster. The place was dark, dirty, and we had little help. I was full of regrets, but since the kids had fun, I just had to get over it. Thankfully, that sports place is now under new management, so hopefully, parties now are better there.

Lesson 8: At least the cake was good. Costco FTW! 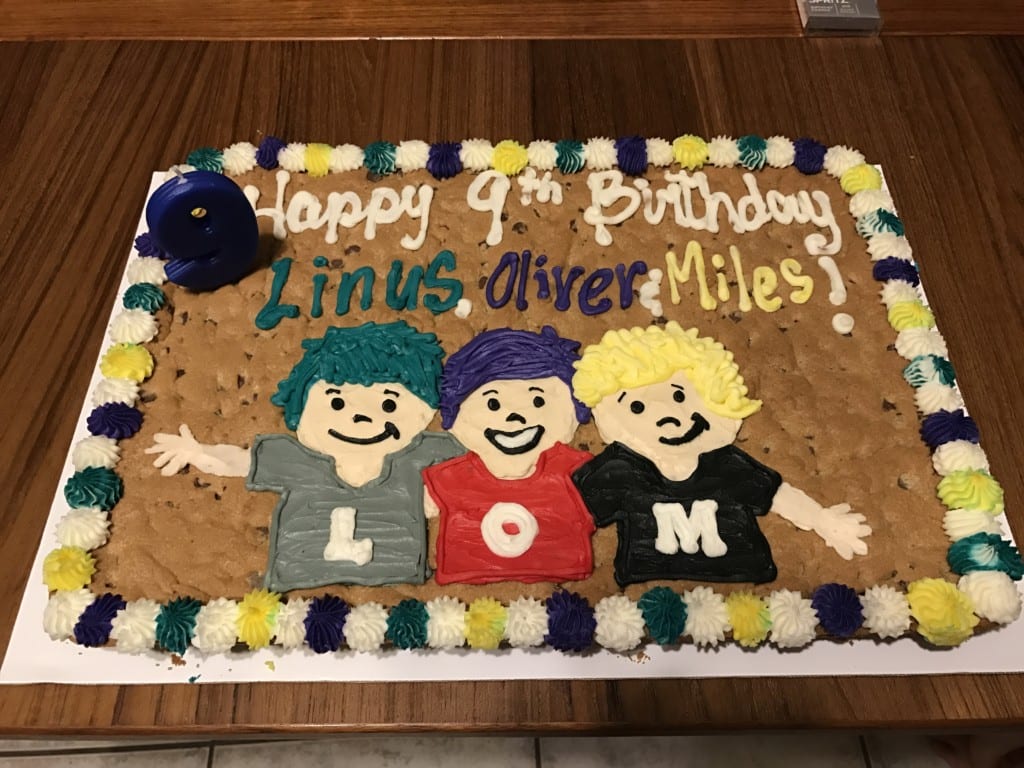 Well, it was about time. The boys were getting invited to sleepovers, and by golly, they wanted to have their own. But here is the problem with triplets. The guests come in multiples of three. How many kids could I fit in my house?!? As it turns out, six guests (plus the birthday boys) juuuuust fit. I suppose it was a success – everyone had fun, after all. And the cookie cake I ordered was a huge hit. But after comforting a crying guest at 1am, and having to get up super early to go get the promised donuts, I vowed never again. For the past year, I’ve said to them, NO MORE SLUMBER PARTIES.

But do they listen?

The Tenth – Yet Another Sleepover

I’m such a pushover.
(Only five guests this year – wish me luck!)

What other lessons can you glean from the multitudes of parties I’ve planned?

1. Keep the guest list reasonable.
2. Embrace your lack of baking skills.
3. Wine for the grownups.
4. Remember, the kids will have fun no matter what.

Cursing In Front Of The Kids: I’m A Potty-Mouth Parent