Most Kindermusik teachers start off taking a class with their own child and loving it so much that they decide to become a Kindermusik teacher themselves. I did it the opposite way, and as a recent “teacher-turned-mom,” it has been so interesting to experience the class in this whole new way!
As a music education student at Loyola University, I always knew I wanted to work with young children. But it wasn’t until I found myself up to my eyeballs in 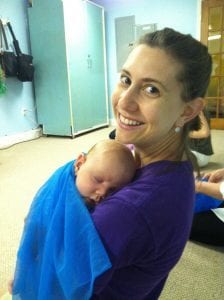 middle school band and choir rehearsals that I realized just how much I wanted to work with younger children! (To anyone who is a middle school teacher, I admire you!) So I found the Kindermusik program, went through the training and got my license to teach as soon as possible. I enjoyed teaching Kindermusik through Loyola University for a few years.
Fast forward to last fall, when my husband and I are opening up Thibodeaux School of Music while I’m pregnant with our first baby. I’m excited not only about my expanding Kindermusik program, but also my expanding family, and of course, my expanding waistline!
Every Kindermusik teacher knows a few things. One, every child is absolutely unique, but there are some things that are pretty standard for each age group: all babies put egg shakers in their mouths, all toddlers will at some point run around the room during quiet time, all preschoolers have imaginations the size of Texas, and all parents think their child is advanced.
Another thing we all know is that the Kindermusik class experience is only a teeny tiny fraction of the whole Kindermusik experience. What I mean by that is that the majority of the Kindermusik experience happens at home. Or in the car. Or in the grocery store. Or wherever you happen to be with your child! As a teacher, I always knew this was true, but now that I’m a Kindermusik mom, I really know that it’s true. In class, my almost three month old mostly sits in my lap and drools, occasionally smiles or cries, and sometimes even falls asleep. But when we’re at home where he’s not overstimulated by all the sights and sounds of the classroom, he talks and sings to me while I change his diaper, kicks and dances in his bouncy seat while we listen to the radio and make dinner, and enjoys a relaxing massage after his bath. Everything we do in class mostly serves as suggestions for what I can do with him at home, when it’s a good time for him and he’s comfortable and alert.
Going from Kindermusik teacher to Kindermusik mom has been so much fun! I can’t wait to see him sticking egg shakers in his mouth, running around during quiet time and pretending he’s a dragon-slaying knight.
And it won’t be long because guess what? MY child is advanced.

Have you taken music classes with your little ones? 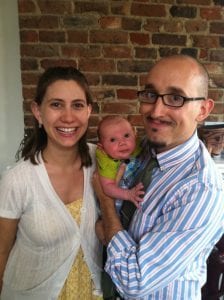 Madeline Thibodeaux is married to drummer Paul Thibodeaux, with whom she co-owns Thibodeaux School of Music. She recently became a mom to Sebastien and has since been dividing her time between school responsibilities and getting in as many snuggles, drooly kisses, and hours of sleep as possible.

5 Tips For A Magical Preschool Experience

How to Prepare the Fur Baby for the Human Baby