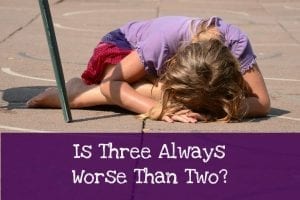 I stood over my daughter completely bewildered by what I had just witnessed. In response to me telling her that she couldn’t play with a toy until she picked up the ones that lay strewn across the floor, she pulled off her undies, threw them at me, and stared me in the eye while she peed on herself. This was followed by a tantrum the likes of which I had not seen before from her. She was screaming at the top of her lungs and throwing her body around like a ragdoll. Snot was running down her face and into her hair. Nothing would stop this train.

She was a week shy from turning three, and I kept hearing the phrase “threenager” rolling around in my head. Everyone kept saying “if you think the terrible twos are bad, just wait until three.” How could it get worse? Would it REALLY get worse? As I mopped up urine through my own tears, I felt so exhausted and lost. If this wasn’t as bad as it could get, what could be worse?

That was about six months ago. To be honest, that is the last tantrum I remember dealing with. Now, I’m not trying to say that she is without fault because we certainly have moments of frustration with one another but, unlike the dark days of the terrible twos, she can communicate clearly what her feelings are. “Mommy, you are making me very angry when you say that” or “Mommy, I do not like it when you tell me that I have to eat one more bite.” Just hearing her express what she feels versus watching her wretch on the floor is such a huge step for us.

I do not know what the next six months will bring us, but the last six have brought us amazing memories. I truly enjoy spending time with her and talking to her and learning what makes her tick. It’s like we have found our groove again as a mother and a daughter. It was the groove we had before her terrible two alter ego took over and caused her to think it was acceptable to throw her under garments at me.

In my experience, three isn’t always worse than two. I don’t write this to brag about my child, but to tell all of the mommas out there who are standing bewildered over their two year old and can’t get over the thought that it will only get worse, to know that it also gets better.

And Then There Were Two: The Many Emotions of Growing a...