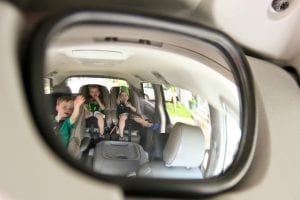 A few days ago, my friend Jill pulled me aside when I ran into her at an event and said, “Pam. You will never guess. We got a minivan.” I wouldn’t say she sounded excited, but kind of resigned. And kind of shocked. But she had her third child last summer, and I think seeing me get the boys in and out of our minivan quickly at school drop-off made her rethink her opinion of them.

Why so much hate for the minivan?

I’ve never understood minivan hate. It’s just a vehicle. It’s a metal shell with seats that gets us around. If I want the car I drive to represent me, then I’ll cover the back in bumper stickers. In college, the back window of my Geo Storm was festooned with Morrissey decals, Apple logos and Calvin & Hobbes. My minivan is a little less decorated than that car was, but it nevertheless declares some neighborhood pride and that I heart my triplets.

And of course it’s because of those triplets that I have a minivan. Sure, we could have gotten away with an SUV, and I even know a triplet family that kept their Prius for a few years after their trio was born. But I’ll admit that I have my own biases against SUVs. Too big, too gas-guzzling, and the lack of a feature that can be summarized in three words. 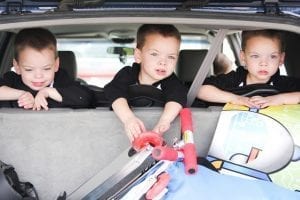 Power. Sliding. Doors. Oh, and it gets better. Remote controlled power sliding doors. When the boys were tiny, I would often have three infant carriers in my arms at once. (One in the crook of an arm, and the other two in my hands.) I could open the doors before I even walked out of the house. Now that they’re older, I am often holding all three of their hands at once. (Two on one side holding fingers, the other on the other hand, along with my keys.) I don’t have to let go of anyone to unlock and open doors. And I don’t have to worry about the boys pushing a door open into the car next to us. At carpool, I don’t have to get out of the car to let the kids out. Just push a button on the console and off they go!

What else do I love about my van, besides its magical doors?

The height: you don’t have to climb into it. They’re pretty low to the ground. Very helpful when your kids are old enough to get in by themselves, but still too short to climb high.

The gas mileage: I can’t say it’s great. I mean, I came from driving a compact that got 30 miles per gallon. But the 17 miles I get now is surely better than the ten a large SUV gulps. And you’d need a large SUV to get as much seating and cargo space as my minivan has.

Flexible seating: Okay, I don’t know how an SUV compares on this matter, but I love that I can fold, remove, and move the seats around in a myriad of configurations. When you have to fit a triple stroller in the back, you need to have a lot of cargo room, especially if you want the kids in the car too.

But in the end, it’s those three little words that get me every time.