From overhearing people’s comments standing in the grocery store line, to remarks from Facebook friends, I have heard and read many comments these past few months about people’s opinions about large families. “Why do they want so many kids?” “How can they afford so many?” “Have they heard of birth control?” And my ultimate favorite, “They must be Catholic.” So why is there this stigma about BIG families? And, why do people feel compelled to comment and consider this a phenomenon? 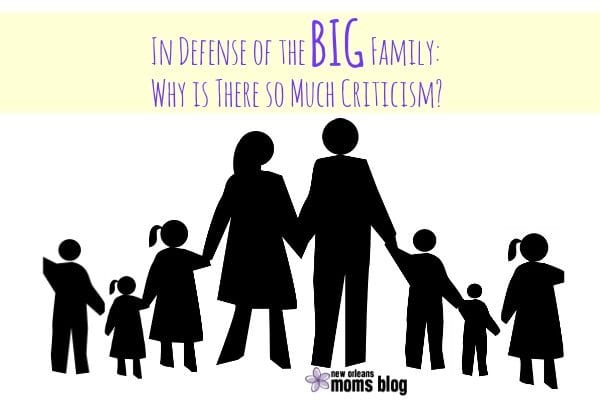 Coming from a family of four children, I thought for many years I came from a big family since most of my classmates and friends only had one or two siblings. Yes, my extended family in the states was small in comparison to others, but as I began to meet families outside of my neighboring community, I found that our family was actually small in compared to most, especially in southeast Louisiana. As a child, I recall a few family gatherings with my aunt’s family. She being one of six children, I remember those fun gatherings. Everyone was welcoming, so many people to talk and interact with and much warmth, smiles and just an overall good time spending time with one another. Jump forward a few decades after graduating from college and I began to meet more friends with very large families – some had six to ten or more aunts and uncles, each with several kids of their own and “adoptive family members.” Their version of weekend family gatherings were more like small wedding celebrations.

My fondest BIG family moment occurred after only a few dates with my now husband. He wanted to bring me home to meet his family for Thanksgiving. He failed to mention, until we pulled up to one of his many aunt’s home, that his family meant nearly 60 of them, and not everyone was there! I recalled us parking down the street and when he opened the door, family members of all ages coming over to introduce themselves and the room filled with laughter, little ones giggling, newborns crying and an abundance of food in each nuclear family’s revered recipe in their unique container. And nothing has changed every holiday since then, except the addition of more babies.

Apparently, there is a fascination with large families in America; if not, The Duggars would not be in their 15th season of 19 Kids and Counting. But, I think Jim Bob and Michelle are on to something. Sure they have a lot of mouths to feed, but I recall watching one episode where Jim Bob talked about the fact they were not in debt. Obviously, they are somewhat of a renaissance family – they built their own home, lease their land for cellular towers, written books, he has served as a former state legislator, and the list goes on. And – gasp – they actually appear to like and enjoy being around one another in front and behind the camera. For me, personally, the most fascinating part of their family is how they managed to come up with so many names that all start with the “J.” And just in case you were wondering, no, they are not Catholic. I think we can all learn from this frugal, respectful, smart and faith driven family that BIG families are not to be mocked. I will support them, by watching their show anytime, say before Honey Boo Boo.

So Why the Negativity?

I am finding more and more with articles and posts, that circulate through the internet, focusing on promoting the opposite values that The Duggars seem to represent and tearing down the image of a large family. Is it because we are scared of the responsibilities and lifestyle associated with a BIG family? Is it because we cannot comprehend how mothers of large families can go through the day without “me” time? Or, a stay at home mother who cooks, clean and can discipline so many kids and still seem happy? That a father can manage to financially support so many children? Does their sense of faith and optimism make others nervous and question their own?

What I Have Learned

From my personal experience, I have learned many valuable lessons being around large families.

– By the time you say hello to everyone, it is time to start say goodbye and this interchange can take hours.

– The kids always have someone to play with.

– In a city especially like New Orleans, you are probably somehow or another related by marriage and are second, third or fourth cousins and/or once or twice removed.

– Family members seem to be more accepting of others and meeting new people.

– Everyone knows who you are and what you are up to.

– Believe it or not, I hear about as many “unplanned” children from those using artificial birth control than those who are using other methods.

– You don’t even have to ask to bring a guest, everyone is automatically invited and glad to meet someone new.

– There is always someone there to pick you up during the rough times and share your laughter through the good times.

I see BIG families as a gift, not a burden. Sure, their lifestyle is completely different than smaller families, and there are larger sacrifices in terms of sharing time, resources and finances. However, the love and experiences are beyond imaginable!

What do you consider a BIG family?

Why I Do Not Use a Reward Chart With My Children