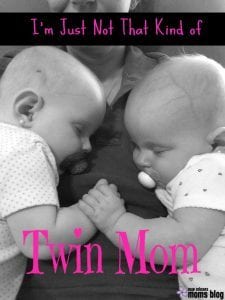 My twin girls are only six months old, yet we’ve already experienced the hilarious, utterly ridiculous, and occasionally insulting babble from strangers and companions alike. Why is the world so obsessed with stereotyping twins? And what is it about twins that just makes people lose their filters? Am I the weirdo because I refuse to adhere to twin cliches? After several months of studying the patterns of posts in Facebook groups for multiples, strangers in the elevator at Target, and the fruit aisle in Costco, I’ve realized that I’m probably in the minority on a lot of these things, but all moms of multiples are not created equal. I will be the first to say that I am stubborn and opinionated, so I’d like to be clear that I am not judging anyone that appreciates these things. And don’t get me wrong – I am BEYOND happy and grateful to have been entrusted with the title of Twin Mom. But, our differences make the world go round, amirite? So, without further ado, here are the cliches I’m so tired fond of seeing and hearing:

“THE Twins” They’re already going to be grouped as the mysterious twin entity by the world, so I make a conscious effort to refer to them as the girls or my girls. Want to call them the twins? Go ahead. I’m just not going to.

“The Twincesses” This tomboy-turned-mom is SO not a fan of the whole princess phase I’m inevitably facing, so I’d prefer not to start that any earlier than necessary. If you call my girls the Twincesses, I’ll sign you up for GOOP’s newsletter. Good luck consciously uncoupling from THAT.

Rhyming names, themed names, same-letter names, or names made up so that they rhyme or the spelling matches. They’re your kids – name them what you want, but *I* have to be able to yell all nine of my three kids’ names when they’re in trouble without getting tongue-tied. People truly want to know why my kids’ names don’t rhyme or start with the same letter. Really? Where is it written that they have to? Oh, that’s right. The same place it’s written where they don’t have to. Nowhere! 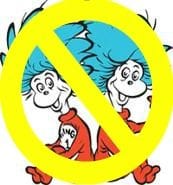 “You don’t dress them alike?” I do. Sometimes. But sometimes I don’t. There are some days where I’m so brain fried I can’t tell them apart except by the outfit they’re in, because that’s faster than checking for a birthmark or reading their ID anklets. Our only marker is a small hemangioma on the side of one of their heads. Once they get hair, we’re screwed.

Thing 1 & Thing 2 Something else that isn’t written anywhere is the requirement to dress your twins like the blue-haired mischief makers, or have a Dr. Seuss themed party. I promise you’re not breaking an unspoken twin rule by choosing to opt out. I file under the same category as chevron or the term “YOLO!” I’m over it, but if you like it, rock on.

“Twins? UMMAGASH I always wanted twins! I’m so jealous!” I’ll call you at 3am when they’re hungry and screaming at the same time, so loudly they wake their big brother who’s asleep across the house and a flight of stairs away. Still want twins? We’re always looking for free babysitting! Wait? Where are you going? 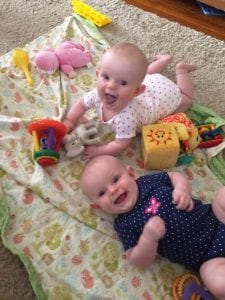 “Did you plan this?” Well. On that warm night in June, I wished on a star, hopped up and down three times, placed my hand on my left ovary and said “CLEAVE” And it worked! You should try it, but make sure you don’t say “VANCLEAVE,” because then you’ll end up with quintuplets.

“Better you than me!” Is that a poor attempt at a compliment? I’m not sure, but you might’ve just proved your own theory by opening your mouth and saying that.

“You sure do have your hands full!” Yes, Captain Obvious. I sure do. Now make yourself useful and pass me an adult beverage. I’ve earned it.

“I don’t know how you do it.” Half the time I don’t know either, but what choice do I have? I just DO IT. This one is usually meant as a compliment, so thanks for not saying one of the other things I just mentioned.

“Double trouble!” This is a popular one. I got in the elevator at Target this weekend and that was the greeting from the lady in there. Well, hello to you, too, singular loud lady!

“Double the love!” Ok, ok…I’m not totally made of sarcasm and grumpiness. This one is true. While they can be double trouble if you think about it – double the diapers, crying, mouths to feed, tuition (let’s not go there in NOLA) – but they are also double the love, fun, hugs, kisses, and smiles, and THAT makes it all worth it.

What comments have you heard that would be better left unsaid?

How I Made Six Weeks of Baby Food for Twins In...

More Isn’t Always What You Think It Is