I Love My Kids, But Thanksgiving Kicked My Butt

I am a working mom. I work full time. Five days a week. So when the Thanksgiving break arrived, I was excited for what I consider the kick off of the holiday season. I had grand plans of prepping holiday food with my kids, doing crafts, going to the park, playing games, and just soaking up every minute of being with them. My husband was leaving for the camp Thanksgiving night so it was going to be girl time. I was so excited to have nowhere to go but just be with them. 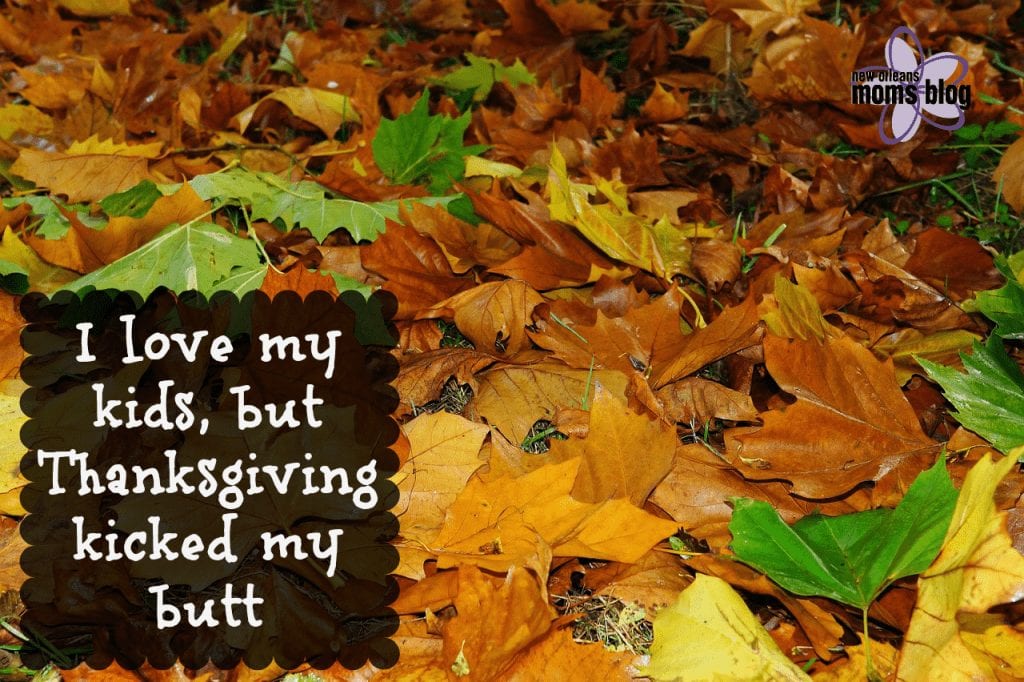 Aside from the comedy of errors of things going wrong, like flat tires on the stroller, getting to the park to have to turn right around, a battle with the diaper genie and the list goes on, I was coping solo.

My struggle came with the juggling.

With the more than four year age gap, they are moving in opposite directions all the time. I was trying to play board games and string bead necklaces while keeping little hands from messing up the game and putting beads in her mouth. I was trying. I was trying to keep the TV off and the ipad away so we can focus on each other. I was trying so hard that I was internalizing how bad of a job I was doing. I even got to the point that I put them in the tub to let them “swim” for an hour just so they would stay still and in one place.

In the middle of the juggle of the girls, I was trying to do the things that needed to be done, like putting the garbage out, dishes, laundry, picking up toys, washing bottles, cooking, and, you know, the other stuff I wish there was a fairy to do.

It started off pretty good.

But as the minutes turned to hours and the hours to days, I became frustrated that the bubble of my lofty plans had busted.

The little one refused to nap and out of character, did not sleep through the night. She wanted to be held every second of the day, which was just perfect. After the whining and the needing to be held continued, I found myself going to the bathroom with her sitting on my lap. I started to get annoyed with her. Then I would get mad at myself for getting annoyed with her. She just wants her mommy and I get that, but I really wanted to go to the bathroom alone and not have to worry that you are going to toss the pacifier in to the toilet as I am buttoning my jeans. Is that too much to ask?

Then there is my older one and I kept having to put her on hold to deal with the younger one. My heart was breaking for putting her second. She was so patient, but every time I had to tell her, “hang on mommy will be there in just a minute” or “I can’t right now; my hands are full with your sister,” I felt awful. I don’t want her to feel like she is second.

It is just a fact that the little one is more needy at moment, but does she really understand that?

I needed to be everything to both of them at the same time, but there was just one of me and two of them, and how do you appropriately divide and conquer? How do you share the attention equally when one is a walking 11 month old and the other wants to sit together and color? I know this was just a couple of days solo, but I wanted so badly for this to be a time of bonding and memories. But that is just not what played out.

I have them solo all the time, how can these few days have been so hard? Is it just their current ages that are making it hard to juggle both? Am I the only mom who is looking forward to schools starting back?

When my husband walked back in the door from the camp a couple of days later, I felt like a failure. I felt stressed and exhausted from my time with my girls rather than it being the experience that I had played out in my mind. After my Fitbit congratulated me for the highest number of steps I had achieved that month, I knew just how much running I was doing. I was tired and I was humbled by my frustrations. I love them so much, how could I feel so overwhelmed? How do the ladies at the nursery do this every day with a smile on their face? How do stay at home moms with multiple kids do this.every.day?

But, cheers to you Christmas break. I see you coming and my expectations are prepped and ready. I will be better at this.

I Am Your Mom, NOT Your Friend