What’s wrong with his face?

Why are his cheeks so red?

…all questions I have been asked on a regular basis from the time my son was three months old. While I understand they come from well-meaning individuals, each time I hear one of those questions I feel myself become irritated, hurt, and defensive.

After my response, I could expect something of the “Have you tried {insert cream/ointment/lotion/miracle homemade concoction}?” or “He’ll grow out of it” variety.

My son has severe atopic dermatitis, also known as eczema.

First, let me back track to when this red, inflamed, dry, itchy skin journey began for my son. I can remember the day as clear as yesterday – I was changing his clothes and noticed his entire belly was covered with tiny red bumps. I called my mom who recommended talking to his pediatrician since the affected area was so large. Change to fragrance-free detergent (goodbye, Dreft) and fragrance-free baby lotions (goodbye, Johnson & Johnson). It helped, a little.

What mom wants to hear something is wrong with her perfect little baby? It genuinely killed me a little each time someone looked over his dimply smile and adorable blue-green eyes just to comment on the condition of his skin. You might say I was overreacting, but no one can deny the intense, emotional journey of finding relief for my son.

Here’s the thing about eczema: it’s more than just a rash.

After a couple weeks, a milk allergy was determined as a possible cause. Since we were mixed feeding, it was goodbye to all things dairy for me, and hello to super expensive formula (you know the kind–the one that NEVER has a coupon and cannot be bought in bulk). It helped, a little. 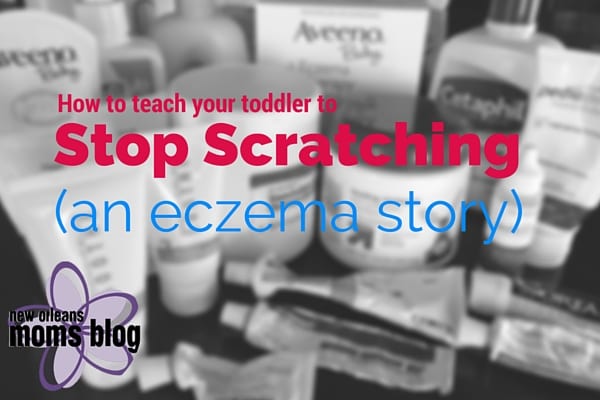 Fast forward to baby food. The tried-and-true method is to expose your child to one type of food at a time in order to monitor allergic reactions. I remember my husband and I deciding we would consider a “really bad flare up” to be an allergic reaction instead of just a “bad flare up.” Sweet potatoes were a no-go. Bananas were a definitely not. Apples? We really couldn’t tell. My son ate avocados for weeks on end (if he never wants to eat one again, I completely understand). After two trips to the allergist, two allergy tests, an extensive list of our son’s allergies, and being told his eczema was “not the worst case ever seen” and “keep doing what you are doing,” we were sent on our way.

I tried every cream, ointment, lotion, and homemade concoction recommended to me by family, friends, friends of friends, and Google. I shudder to think how much money we spent on all of it. I found myself obsessively applying lotion on my son every fifteen minutes and feeling guilty each time I fussed at my baby for scratching.

It was the one thing guaranteed to cause a major breakout. If my son touched anything that had fur or fragrance, it would start the scratch/breakout cycle. Warm weather? Sweat? Grass? That would also start the cycle. He/We lost sleep because he would wake in the middle of the night to scratch his arms and legs, or he would rub his face raw against the sheets. My in-laws bought him special pajamas that were made of a breathable material and covered his entire body – even his hands. We had arm sleeves for him to wear to school when it was too warm for long sleeves (98% of the year in Southern Louisiana). The new sleepwear and sleeves at least alleviated some of the scratching and helped, a little.

When my son was eighteen months old, we reached a breaking point.

His entire legs were covered with open, weeping sores. He cried in pain to even have them touched. We kept him home just so he could walk around with no clothes. When antibiotics did not help, his pediatrician recommended we see a pediatric dermatologist.

The appointment went by quickly, but in that short time I was told to stop everything I had been doing. The doctor gave me a handout of the exact steps I needed to take – from washing my son’s clothing to giving him a bath, a specific list of recommended lotion and bath products and two prescription creams for my son. During the drive home, I remember feeling a sense of victory because I finally had a plan of action. My husband and I both felt like we actually had a fighting chance to help our son find relief. We threw away all fifteen bottles of lotion (I am not kidding), including the three I carried with me at all times. It was a real leap of faith.

Within one week, the sores disappeared. By two weeks, my son’s skin was completely clear.

One day, I just sat on the couch, felt his smooth skin, and cried because it was something I never thought possible.

We let him play outside and sweat like a typical toddler without worrying about his skin flaring up. He now sleeps through the night without scratching, and he can sleep in shorts and short-sleeved shirts. He gets sick less (flare-ups made him prone to illness), and his diet consists of more than just avocado. When people see him, they notice HIM, not his skin.

Even though he has the occasional flare up, in my eyes, my son has nearly perfect skin, and I have nearly forgotten the Google-obsessive, ultra-defensive, lotion-wielding mom I once was.

To My Son’s Teachers :: Thanks For All The Things You...