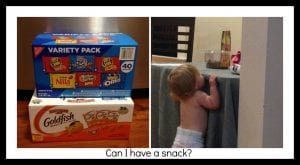 My husband’s recent Facebook post stated it perfectly: “5 years ago we were dining at French Laundry, now I’m negotiating with a 3 year old over how many chicken nuggets she must eat before she can have a chocolate covered marshmallow.” The setting was a lunch at Walt Disney World. For the past few weeks, meal time has been a never-ending battle that I am determined to win. I don’t ask a lot of my child, but I do want her to eat the healthy food I put in front of her before moving on to something else. Or, for a change, eating a meal and not begging for a snack 15 minutes later.

Before I had kids, I swore I would never be the mom who made separate meals for my kids or fed them chicken nuggets if they didn’t like what was put in front of them. And, as the saying goes, “The best laid plans of mice and men often go astray.” Here I am, making separate meals for my daughter. Instead of just making a family dinner, I’ve started feeding her and my other daughter earlier and making a separate meal (or take out) for me and my husband, which we eat after the kids go to bed. Some days after school, I’ll take the kids to Whole Foods and let them even pick out their own dinner. One will always get mac and cheese with veggies, the other picks a baby pizza and salad bar. My issue isn’t about getting them to eat veggies. Both of my kids actually like veggies. It’s about getting the older one to eat when I put food in front of her and not asking for a snack 10 minutes later. Or saying, “Eat 5 bites and then you can have a treat.”

The endless snacking just bothers me. From the moment I pick up my daughter from the carpool line, to the time she goes to bed, I feel like it’s one endless ask for a snack even though she just ate dinner (or whatever meal). I thought for a while she wasn’t eating lunch at school, but I found out that she actually likes the hot lunch at school. She also gets a snack before lunch and a snack after nap time. And, if she stays late, a snack at aftercare. Yet, the very second she gets in my car she asks for a snack. Lately, I’ve tried to curb this constant asking but it doesn’t work. She just asks again 5 minutes later, acting like I might have forgoten that she just asked me!

So here I am, looking for help, guidance, and anything else you might have to offer. A lady at the store overheard me telling my daughter that if she was hungry she should have eaten her lunch. The lady gave me some interesting advice: pack up the food and bring it with you to offer or leave the food out for them to eat when they want. I am going to try these as much as possible, but with two small dogs and a walking baby, it’s hard to just leave food out. It usually gets thrown on the floor or eaten by the dogs. At this point though, I’m willing to try anything. So please, leave suggestions, advice, or just support to end the snacking now.

Are your kids snackers?

Help Close The Diaper Gap with the Junior League of New...

Learning How to Pronounce Achondroplasia