So before I start this post I want to say that I am in no way writing this for any form of credit. My goal is to share with you the perspective of the holiday and hope that it inspires you to pay it forward.

Tomorrow is Thanksgiving. We will gather around a table with friends and family. We will talk to our children about the pilgrims and the Indians. And, we will give thanks for what we have, both those things that are tangible and those that are not.

Then, less than 24 hours after we break bread in peace as a family, all hell will break lose at stores across the country. Black Friday and Cyber Monday will be upon us. Moms all over New Orleans will be preparing their shopping lists and figuring out what it is that Santa will deliver this year. 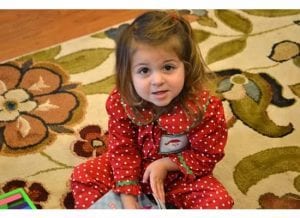 It was this time last year that I was doing the same thing. In the days that followed Thanksgiving, I was finishing up Santa shopping for my daughter. Of course, I got overly excited and bought too much for her. I had ordered a game for her Leap Pad to be shipped to the store at Walmart.

I was waiting in line to pick up her game at the layaway counter, which is where the ship-to-store counter is as well. A mom in front of me was putting toys on layaway. She was asking the Walmart cashier just how much she had to pay in advance and when she would have to have it paid in full by. As she was asking about extensions to pay off her balance, they finished ringing up her total. It was $120 for what looked like two kids, a boy and a girl.

I can remember thinking about how shocked I was that I was picking up a $40 game for just an extra stocking stuffer and thanking God for our blessings. After I picked up the game, I went on my way. But, I could not shake the image of that mom.

In the coming days, it seemed like so many celebrities were visiting Target, Walmart and Academy buying oodles of toys for kids in need or in the hospital. They were spending thousands of dollars. I thought how cool it would be to be able to make an impact on someone’s Christmas like that. That is when it hit me: I can’t spend thousands of dollars. But I can spend an extra $120. I told my husband what I was going to do, and he fully supported me.

I went back to Walmart as fast as I could. I remembered the lady’s name and I told the cashier I wanted to pay her balance. She was surprised by it but helped me to find her items and pay for it. I left a $1 balance on the account, because apparently if I would have paid the whole thing I would have had to take the items with me.

The Walmart cashier told me so many people put toys on layaway and never come back to get them because they can’t pay the balance. As she picked up the phone to call that mom to tell her that her layaway balance had all been paid except for $1, I had to leave. I was so emotional and the tears were rolling. I was so happy that I was able to make a difference for that mom. Yes for the kids, but more for the mom. I could not imagine not being able to deliver Christmas to my child because $120 stood in the way. I know that happens in many households, but I was going to make sure it didn’t happen in this one.

It has been nearly a year, and I still think about that mom. The impact this little act had on me was huge. I plan to visit Walmart again this year and pay off another toy layaway.

I am telling you this story because – as you work on your shopping list and holiday budget – if you can put a little extra aside, no matter how big or small to you, it could mean so much more to another New Orleans mom working on her Santa list and wondering how she will make it happen.

Read on for other ideas on serving others throughout the city during the holidays.

Little Pnuts, aka A Birch Box for Babies…Kinda